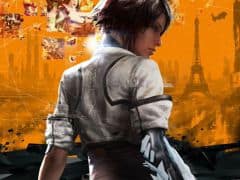 Remember Me is painstakingly slow to unravel. After escaping the grip of her former employers, lead character Nilin – a futuristic memory-jacker turned fugitive – is lead across Neo-Paris and Saint Michel by a mysterious figure named Edge. His guidance has her clambering across rooftops, visiting robotic Red Light districts and re-entering the Bastille prison that once kept her captive. Edge’s instructions provide senseless justification to a narrative that opts for grandiose language and a pompous execution of ideas that makes everything sound far more intelligent than it actually is.

This game aims to deceive gamers by utilising characters who speak in riddles, soliloquies and excerpts from Shakespeare’s dustbin. Profound quotes from authors such as Rudyard Kipling and Alexander Pope appear throughout, puffing the game’s chest before a spurting of original nonsense exhales under the pressure of maintaining illusion.

Developer Dontnod appears to have combined a standard script with the knowledge of its trusty thesaurus, exchanging perfectly acceptable dialogue (or should that be ‘repartee’?) for a conveyor belt of verboseness. Even the terrible voice actors sound unsure of the premise, delivering lines with the confidence of a GCSE student who googled synonyms the night before their work was due in.

Such occurrences are characteristic of a title that buckles under the weight of its own expectation. Combat is similarly high-brow upon first inspection, as Dontnod promise a setup of creativity before holding the player’s hand and skipping to the credits. Rudimentary combos must be strung together, creating a chain of attacks that is stronger than the sum of its parts. This eliminates the lure of button-bashing but streamlines the route of progress so that you’ll only ever need to learn two separate combos once all types are unlocked.

Effectively executing combos that regenerate Nilin’s health and special moves are the only concepts you need to grasp aside from dodging. This can be achieved by prodding X and Y in certain patterns, none of which will ever need to exceed six button presses. For lazier players, such effects can be applied in two or three well-timed executions, as most encounters can be overcome with one hand on the pad. The game punishes you for not using self-created combos, as individual punches and kicks barely register against tougher opponents. You either repeat the same move thousands of times, or you get beaten.

Dontnod isn’t content on just seeing Nilin punished for your mistakes. The Parisian developer clearly wants to induce a vomiting plague throughout the Western population if its camera work is anything to go by. In combat situations, expect the camera to spin wildly, closing in on Nilin and making it impossible to see where incoming threats stem from. Enemies will often attack when off screen, ensuring you’ll be forced to continuously leap about in fear of taking a pummeling. This only amplifies a viewpoint that wants you to spew a chundery mess all over your lap.

At one point, after a particularly fruitless battle, the camera zoomed in so close that I couldn’t see above Nilin’s head. Considering the window in which I needed to escape loitered above this point, a horrific game of ‘press the jump button everywhere’ ensued, eventually finding the right path through luck. One has to wonder if Dontnod programmed anything more than a wire mesh above Nilin in this section.

Aside from tedious platform sections, a handful of memory altering mini-games intersperse the fighting. These are fragments of story that must be rearranged to alter a character’s timeline, thus allowing Nilin to progress through the main narrative. Although simple, rewinding a cutscene and changing minor details ensure major differences that are genuinely entertaining. These moments won’t take long to surpass and represent the most innovative idea Dontnod manages to successfully implement throughout the game.

Other moments of inspiration are also brief. Neo-Paris is a pick ‘n mix of idealistic

adverts, slums and historical landmarks. The Eiffel Tower looms above the city, while the Arc de Triomphe nestles within poverty. The developer takes huge inspiration from Tron, mixing light-disc styled memory holders and de-rezzed opponents with a soundtrack that comes close to infringing upon Daft Punk’s Legacy score.

Capcom’s decision to publish a new IP at this stage of the console cycle was a brave one; even more so when you consider the lack of guns and male protagonist. Unfortunately, Nilin’s preservation is entirely dependent on the men who direct her every action. No male hero would ever complain of being scared to fight, nor would they be consistently patronised by members of the opposite sex.

Nilin is both damsel in distress and sacrificial lamb for a greater good that will only aid a capitalistic dystopia produced by the science of men. It’s a step back for females in games, as while deemed capable enough of fighting against France’s underbelly, Nilin does so in a narrative that is apparently beyond her intellectual capability; even though she’s shown to be more than smart enough to work it all out.

Remember Me is nothing more than an entirely forgettable tour de farce of archaic game design. Its horrific dialogue, sickening camera and regressive combat are major blips in a title that poses one major question: was this game worth releasing? ‘Dontnod’ is arguably the right answer.

A mixture of big ideas and low-rent execution, this is one memory worth forgetting.
4 Lovely visuals in places Cringe-worthy dialogue Bland, unrewarding combat