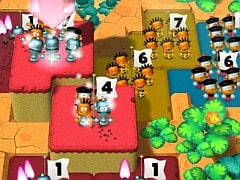 When it launched on iPhone, it seemed like Quarrel had it all. A clever concept, sharp visuals and a chucklesome sense of British humour. Only developer Denki, in its infinite wisdom, slipped up and completely forgot to put a multiplayer mode in.

This deeply competitive app was begging for the ability to fight with other humans. In fact, it was the biggest oversight in games since Guitar Hero shipped without Freebird, or that unforgettable version of Gran Turismo that launched without any cars*.

So it seemed like this Xbox Live Arcade port was finally about to make things right by packing in a proper competitive mode from the word go. Happy days, right? Well, they would be if Denki hadn’t managed to forget offline play. Quarrel’s got multiplayer this time around, but only over Xbox LIVE.

Oh that Denki! It’d lose its head if it wasn’t screwed on, which would be a shame as a brain is vitally important to the success of this video game.

Lack of local multiplayer is a disappointing omission, seeing as Quarrel would be perfect for elbow-jabbing sofa wars. Especially as, at its core, the game is a shrewd mix of two board games – family-style gatherings that are absolutely designed for multiple players.

At the macro level it’s a cute and colourful take on Risk. A battlefield is split up into various coloured tiles (depending on the number of players competing), and troops – cavemen, lizardy things, robots and stereotypical Scotsmen – spill onto the board.

It’s a pretty typical game of domination. The bigger battalions take on weaker foes, and you can redistribute your military might between adjacent tiles. Win a battle and you’ll take both tiles. Lose an attack and most of your men will be lost – either in death, or as prisoners to the defending winner.

It’s a constant tug of war as players capture large quantities of land in one turn, then lose the lot in the next, while winning the match is all about owning every space on the board. While the on-screen keyboard of iOS devices was perfectly suited for Quarrel, it’s still easy to zip around the warzone and fiddle with your army on the Xbox pad – even while under the clock.

So far, so Risk. But in Quarrel, battles aren’t determined by dice rolls. Instead, going toe-to-toe with an opponent means an impromptu anagram fight. A rack of Scrabble tiles pops onto the screen and the two warriors attempt to worm out the longest and most consonant-y word possible. The number of troops on your tile dictates exactly how long your word can be.

If Zynga’s hugely popular Words with Friends taught you how anagram-hunting can be a weeks-long, contemplative affair, Quarrel will force you to think a little harder. There’s a real sense of urgency in Quarrel because you’re spelling against the clock, and if you draw with your opponent the win goes to the faster speller. There’s no time for umming and aahing over words, and playing Quarrel is like a match of Scrabble against an impatient bear.

For the most part, the word-offs are thrilling bouts. It can be aggravating if you spot an awesome word but don’t have enough men to spell it out, and while you can deploy a bonus warrior you only get a chance to do this before you actually get to see the letters. Not very handy when you’re one troop away from a killer adjective.

There’s also the messy issue of the game’s dictionary. As has been widely reported, Microsoft’s internal filters have saddled Quarrel with a bizarre list of banned words, ranging from the controversial (god) to the naughty (balls and shaft) to the just-plain-odd (help, dice and start). But while balls are out, the game accepts buttocks, wee, plops and the dangerously suggestive mudflaps. So that’s good.

While the game has lost bits of its dictionary in the transition to Xbox LIVE, it has gained elsewhere. While multiplayer is the obvious draw, Denki has included a whole heap of stuff to do offline.

There’s Domination, which vaguely resembles a single-player campaign. There’s Showdown, where you go head-to-head with each of Quarrel’s “masters”: ugly avatars, essentially, with their difficulty and penchant for spelling obscure Greek words gradually increasing. There are a bunch of achievement-style challenges to beat and, if none of those suit, the option to play whatever set-up you fancy.

No matter the mode you play – online or off – Quarrel provides a devilishly clever idea that is executed with confidence. It’s compulsive, too: dominating the board has a tasty strategic thrill, and finding an eight-letter-long anagram is always cause for a fist-pump. It was fun against that jerk Malik on iPhone, it’s even better against mates online.

The whole thing is wrapped up in a darling Fisher Price aesthetic and presented with wit and style. A lack of offline multiplayer and Microsoft’s dodgy dictionary compromises the package, but it’s got more modes than you deserve and a ridiculous 400 point price tag.

Quarrel is wrapped up in a darling Fisher Price aesthetic and presented with wit and style.
8 Online play and loads of modes Clever concept, solid execution No offline multiplayer A bizarre list of banned words. "Grapes?"