After the surprise announcement and release of Subsurface Circular, which I very much enjoyed, Bithell Games returns with Quarantine Circular, the next in what (post-Subsurface success) the team decided would be an anthology series exploring different aspects of sci-fi that Mike ‘Thomas Was Alone’ Bithell finds interesting. This time the aspect is ‘what if an alien arrives on earth and is captured by a medical research ship at the same time as humanity threatens to be wiped out by an antibiotic-resistant plague?’

This specific scenario is of course a way to explore things like first contact, identity (a topic that comes up a lot in Mike ‘Mike Bithell of Bithell Games’ Bithell’s games) and, of course, what if there are loads of aliens out there but they’re not coming near us because humans are whatever the alien equivalent of a hot mess is?

Quarantine Circular is played in a very similar way to Subsurface Circular: through conversation. You talk with other characters, responding to what they’re saying, and can pursue different topics based on Focus Points that come up. While in Subsurface Circular you played as one investigative robot, in Quarantine Circular your point of view switches around. When the game starts you play as Marc, who is tasked with setting up the automatic translator key so you can communicate with the alien. Later you play as the alien, called Gabriel by the humans, and then other members of the crew who all have their own agendas and preconceptions. 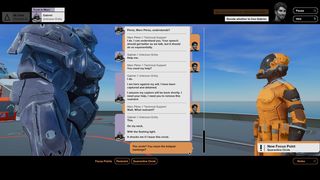 This is at first disorientating, but it swiftly sucks you in. It’s a debate where you get to see everyone’s point of view, and often a wall is cleverly put between player knowledge and character knowledge. Security Officer Teng, for example, is openly hostile to the alien, and in the points you play as her your dialogue options are always in line with that. It’s impossible to climb down as Teng and say ‘Fair enough lads, I was being a bit aggressive there.’ At most you can manage a ‘Maybe I should find a way to trust you’ but you’ll usually be backed into an ‘I regret nothing!’ stance. The writing, as in Subsurface Circular, means that each person has a distinct personality and tone, and they all feel genuinely different, and not entirely knowing character motivations, even when you are that character, is fascinating. After all, we sometimes can’t explain why we do things in real life.

It works well to underline the point that everyone in a situation has motivations unknown to everyone else, but it’s also part of why Quarantine Circular lacks some of the focus of Subsurface Circular. In Subsurface you were investigating a disappearance, forming a solid thread you could hold onto despite the twists and turns. Quarantine has objectives, but the line is broken when you switch to a different character, and while there are fun word puzzles to untangle, you mostly just have to keep talking until subjects are exhausted. They’re well written and enjoyable conversations, but the game as a whole just need a bit more focus to keep your attention.

You do benefit from paying attention, is the thing. Each section sees you making at least one important choice that will affect later scenes and the possible outcomes of the game (enough that you’ll be interested in playing again, and luckily you can choose different sections to replay rather than having to do the whole thing if you don’t want to). That Quarantine Circular is both short but manages to give you reason to explore all its possibilities is impressive, and you do feel you get to know everyone involved, even if you don’t like all of them. It’s an exploration of conversation, and you come away with the feeling that conversation is preferable to aggression, but even in that case humans may not have that much to recommend them. Human beings: the hot mess of the universe. 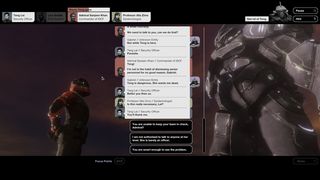 Quarantine Circular, while lacking the same focus as Subsurface Circular, is another engaging untangling of science fiction concepts with interesting characters, and it leaves you waiting for the next instalment.
7 Distinct characters Interesting conversations Cool take on old sci-fi ideas