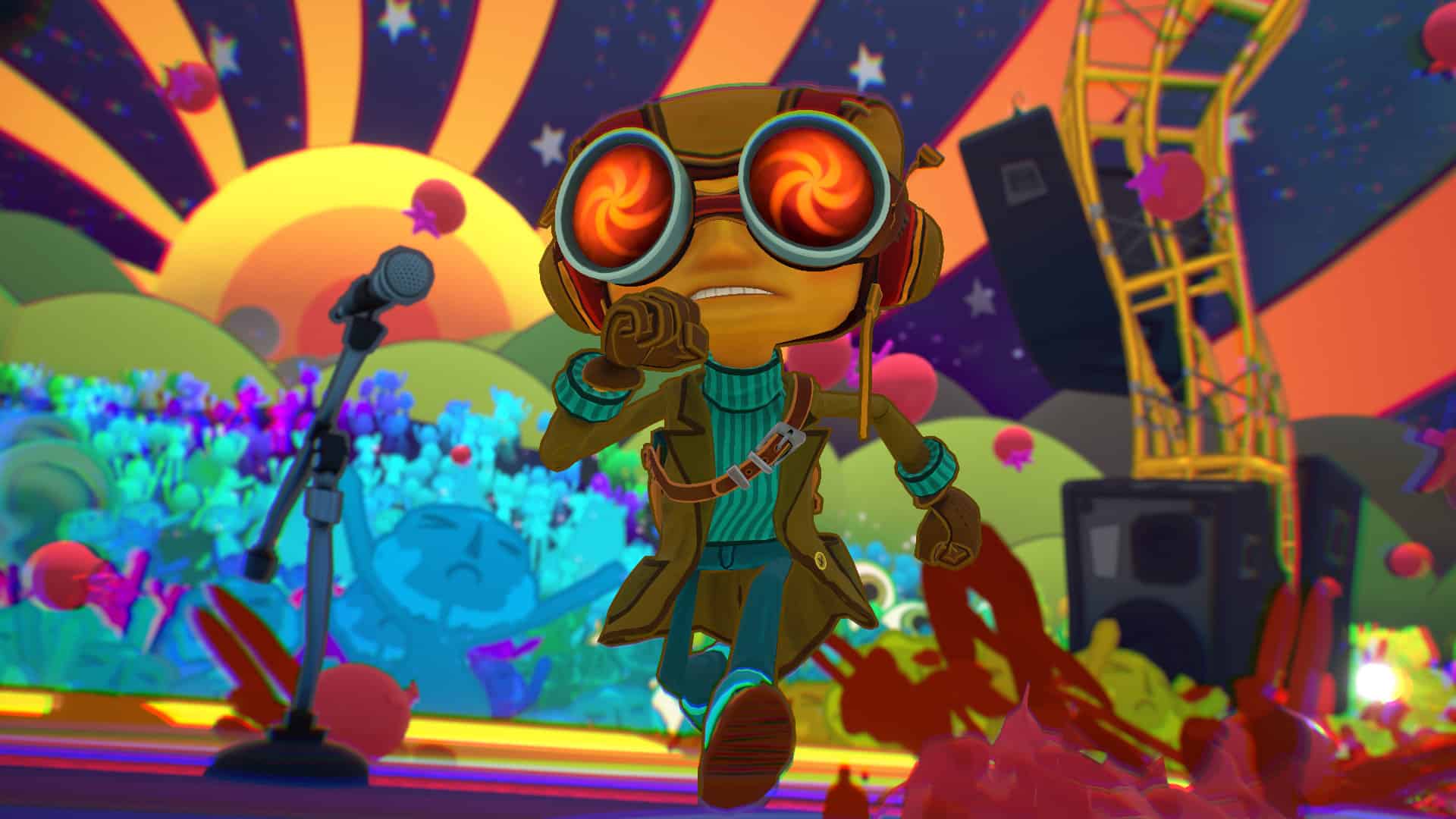 Sixteen years after the release of Psychonauts, Tim Schafer is inviting us back into his mind. What we find in its chambers, over the course of Psychonauts 2, is the continuing story of Raz, a junior psychic-in-training, who dreams of joining the eponymous organisation: a government echelon whose operatives are imbued with extrasensory powers. But there is something else here, more deeply embedded. What obsesses Schafer (who serves as director and writer) more than the plot, which sees the looming of a long-dead foe; more than the psyched-up platforming that governs the action; and more, funnily enough, than the jokes jammed into every conceivable nook—is the nineteen-sixties.

I hoped that this would still be the case. No director has tended so intimately to the trappings of the twentieth century. Think of Brütal Legend, his light-humoured ode to the joys of heavy metal. Or of Grim Fandango, his masterwork, which feasted on the forties, wrapped in the knowing shadows of film noir. My prevailing impression of Psychonauts is of its furnishings. Going into the sequel, I prayed that we would still find Sasha Nein sporting his close-fitting turtleneck, with a cigarette cocked between his fingers. And surely his colleague Milla Vodello, whose bright bell-sleeve dress has rang in my memory ever since, would return with her mobile-size earrings intact? I needn’t have worried. And there is plenty more besides. We get whiskey tumblers and dark wooden desks, chess sets and geodesic domes, and the soundtrack is still fried by the twang of an electric guitar. Plus, the Pelican is back: the agency’s groovy brain-powered jet, its shell painted with a peppermint swirl. 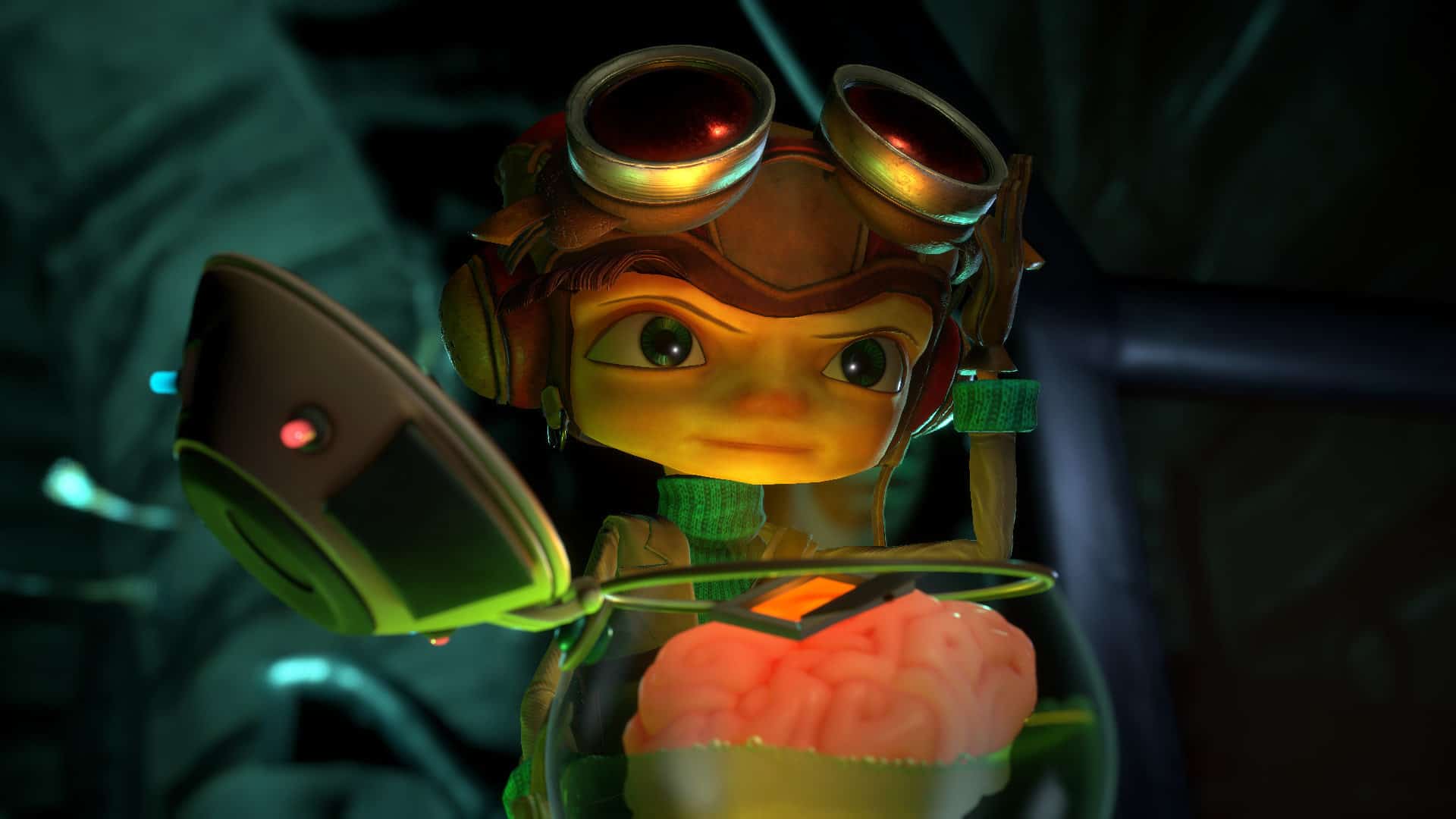 The story takes off where the previous one landed. Raz gives us a run-through—though he would say a debriefing—on the events of not just the first game but of the VR interlude, Psychonauts in the Rhombus of Ruin. (That has to be one of the best titles ever devised, and, I must say, the no-nonsense officiality of “Psychonauts 2,” from which all trace of the zesty has been peeled and squeezed, borders on the dull.) Schafer is quick to probe the wide gap between this and the original, prodding the fans who have been waiting, since 2005, for a proper follow-up. At one point, Raz, recalling his exploits, says, “It’s been”—pause—“days.” Years ago, the Psychonauts encountered a powerful being called Maligula, who specialised in hydrokinesis—that is, the mental manipulation of water. Wreathing herself in writhing streams, she crashed into battle with the agency. Lives, and minds, were lost.

Now she may be leaking back onto the scene, and Raz, together with a gaggle of other kids, must enroll in the intern program and go digging into the damp spots of the bureau’s past, the better to prevent her return. Much of the game, in fact, is about the gulf between past and present. For one thing, attitudes have shifted. Raz still spends his days leaping into the heads of others, pruning back their psychological weeds, but Psychonauts 2 takes greater care with its subject. Raz is chastised, for example, after slipping into the psyche of his new instructor, Hollis Forsythe, without her permission. What’s more, the game opens with a message from the studio, Double Fine Productions, regarding its “artistic interpretation of serious mental conditions,” that concludes by telling us that the game is “about empathy and healing.” 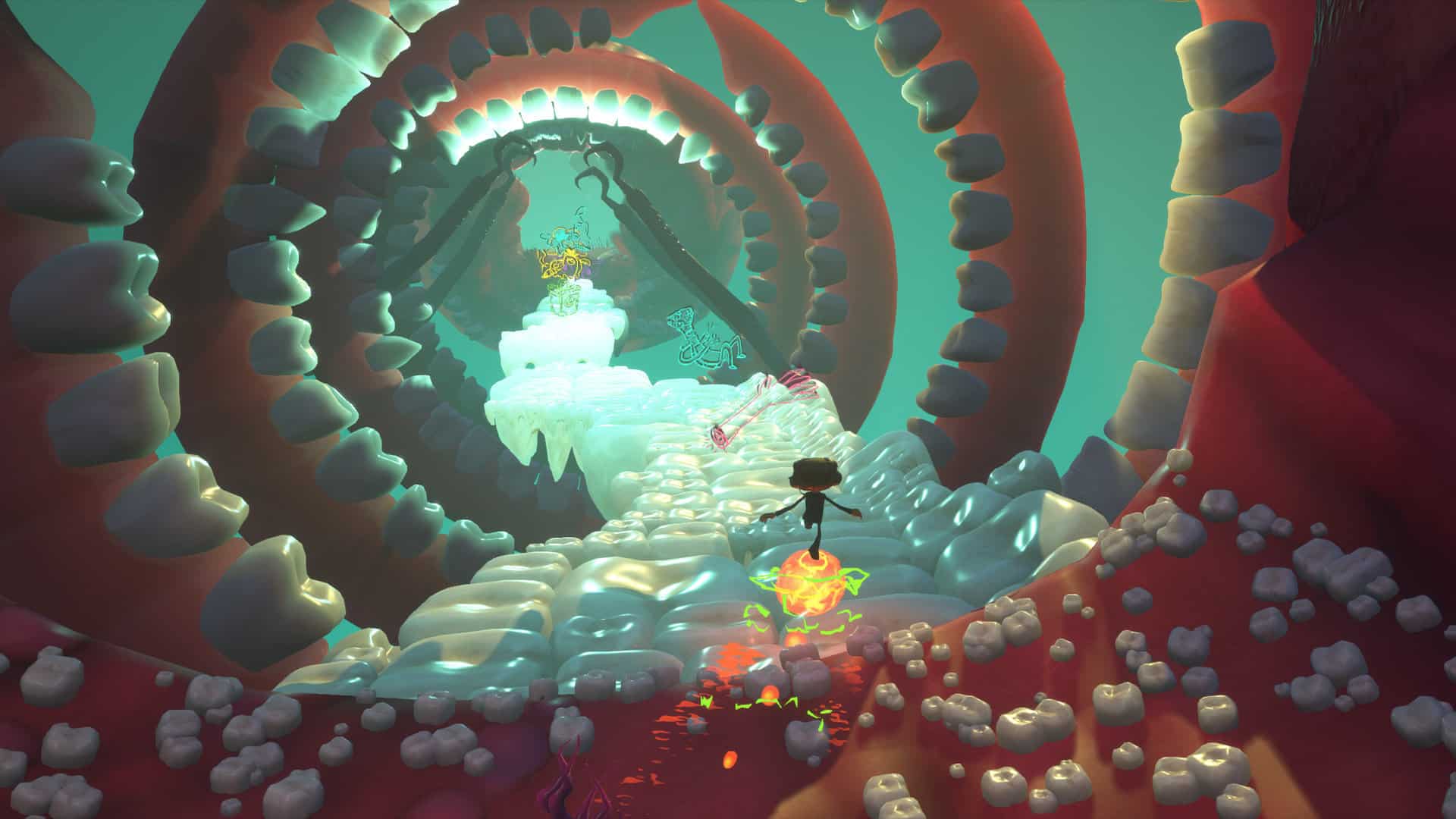 The healing, of course, is where the danger lies; exploring these topics in games is nowhere more fraught than when neat solutions are proffered. Fortunately, Psychonauts 2 is more than happy with the exploration itself, and the interpretation is as artistic as ever. The art direction is led by Lisette Titre-Montgomery, and the credits teem with a throng of supporting talent that includes, I am delighted to report, a “material artist” (Kristen Russel). There is a lot of material to work with. One early level sees us diving through the temporal lobe of a dentist; thus the platforms become molars, crumbling and carious, stuck in mounds of pink gum. Later, we drift through the psychedelic recollections of a rock band, and the landscape blooms and Beatles into cel-shaded reverie. When it comes to the mapping of backstories and emotional states onto the geography of a place, Silent Hill 2 remains without match, but that game was about the failure of empathy and the inability to heal; its characters were fogbound by their trauma, whereas Schafer would rather shine through—not with quick fixes but with warmth, and waggish irony.

When the original was released, it was a sticking point for some that beneath the writing lurked, of all genres, a platformer. Since the start of his career, making point-and-click adventures at LucasArts, Schafer had been most celebrated as a comic writer; his games were infested with jumps, but they were always to the conclusion of a joke—or else they were leaps of logic, done in the service of obscure puzzles. As such, the surprise of Psychonauts was its mechanical competence; it felt like a short hop from one kind of brainy game to another. The sequel, by definition, cannot pack the same shock, but it arrives bearing new gifts. 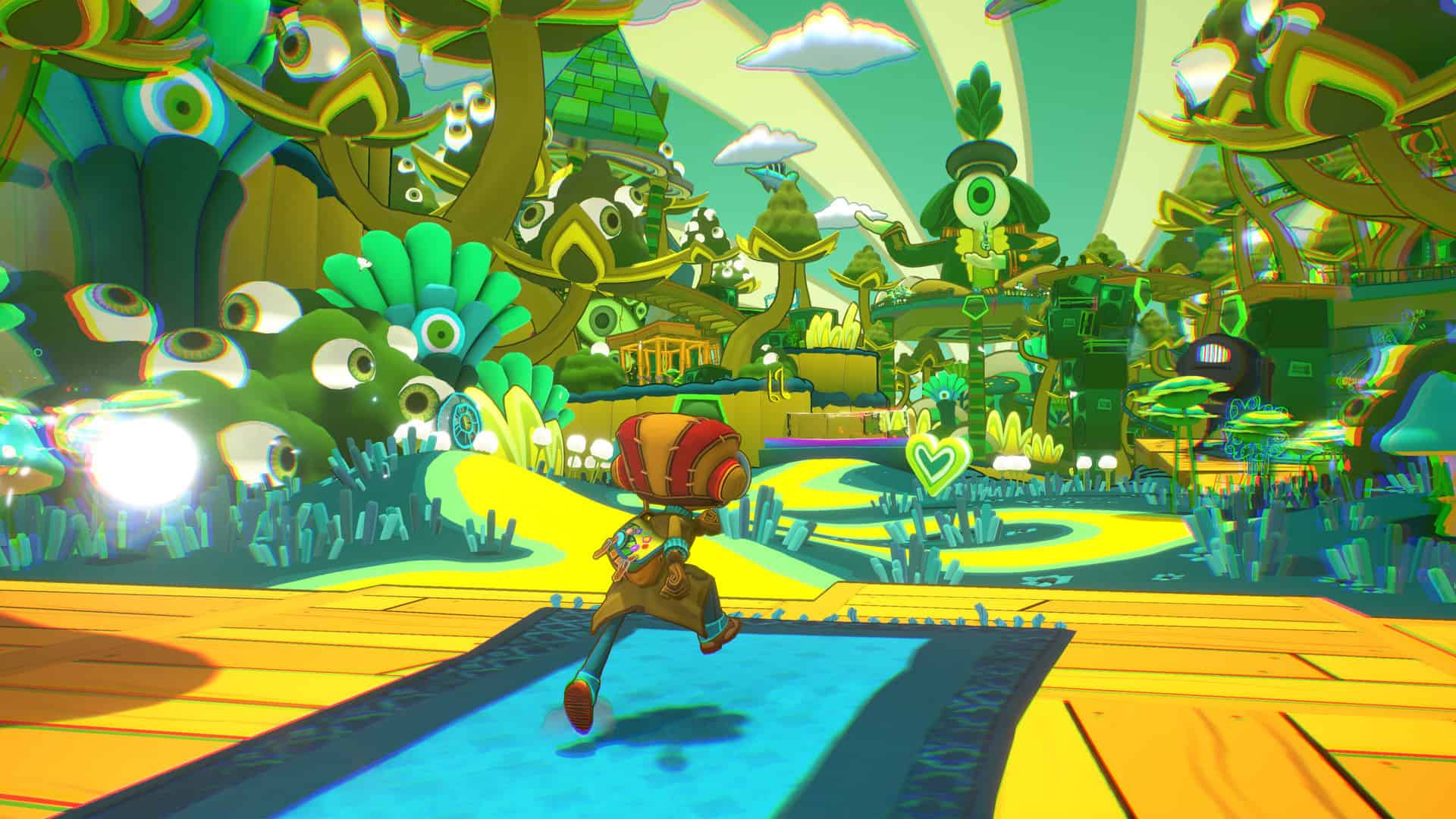 I’m particularly fond of Raz’s Mental Connection ability, which allows him to zoom between fixed points in a flash; the fixed points happen to be concepts (“delight,” “risk,” “money”), held in the scratchy clouds of somebody’s subconscious, and the zooming draws links between them. This is where Psychonauts 2 excels: the melding of mechanic and theme. We are, in effect, given a grappling hook, but its basic hook—the tethering of abstract ideas within someone’s frontal cortex—requires some grappling. The same could be said of the platforming, which still has the slightly scrabbling quality of its predecessor. Raz will occasionally fail to grasp a crucial handhold—as though it were a complex idea—and his array of powers must be shuffled and pinned to the shoulder buttons on the fly. More than once, I attempted Clairvoyance on an enemy, trying to see things from his point of view, instead of doing the decent thing and setting him on fire.

If these complaints sound like nitpicking, that is because I spent most of Psychonauts 2 like Raz: eyes goggled in focus, eager to pluck out figments of my nostalgic imagination. The sublime pleasure of the first game was that Schafer had hijacked the amygdala of an untouched genre; his natural mode was loving mockery, and it had found a fresh target in the platformer. The hidden collectibles—a staple since the days of Super Mario 64—were not coins or stars but suitcases: someone’s Emotional Baggage (a perfect visual pun), to be tagged and tidied away. That feature returns in the new game, but those coming to it having played the old will be lugging their own into the experience. A fleet of familiar images will be tagged with a satisfied nod, rather than blissful revelation. 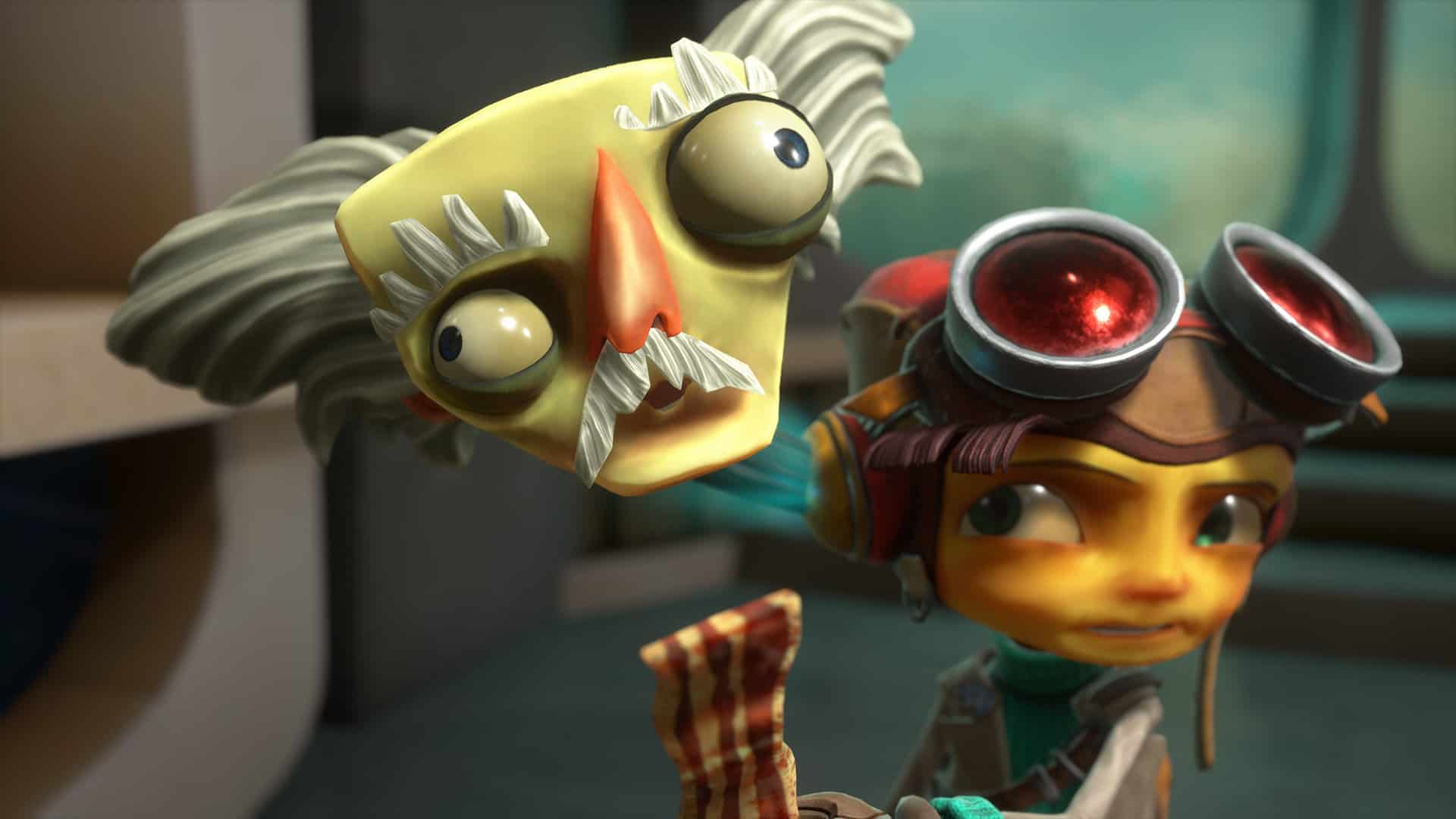 Mind you, not that there aren’t a host of unseen treasures to greet you here. Check out the organisation’s HQ, the Motherlobe: a brain-shaped mound of glass cradled by concrete hands, jutting from the green of a quarry. It’s the sort of place that James Bond would be hauled into for a session of byzantine torture. Elsewhere, the old sights return, burnished by the surge of technology. The difference between now and then is defined most crisply by the fact that now the action runs in sixty frames-per-second; playing the original and the sequel in succession, as I did, is like jumping from stop motion to C.G.I.—in which all the stops, for good or ill, have been pulled out. I was gratified to see that the graphics had done nothing to disturb the style—at once welcoming and mildly depraved—with which the characters were drawn. Ford Cruller, an elder statesman of the Psychonauts, still resembles a Picasso rendition of Einstein, his features pleasantly scrambled; only now the smokey blast of his hair is smooth and chunky, like combed-back clay.

“Memories, my boy. Just a show we put on inside our heads. Sometimes the first draft of the script stinks. Thanks for helping me with the re-writes.” So says an old rocker, to Raz. And you can sense Schafer speaking not only to the show he put on back in 2005, but to the way that our memories can seem like rehearsals for the real deal—for some future performance where we will be better, more practiced, more interesting. Psychonauts 2 may lie in the shadow of a first draft that certainly didn’t stink, but it is more than a rewrite. There are few games as imaginative as this, or as liable to make you laugh. Set aside the baggage and enjoy the performance.