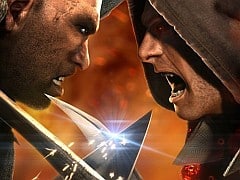 The original Prototype was an open-world game attempting many things in its annihilated vision of New York, but for most people it has been symbolised by one solitary instance: a hooded man repeatedly launching into flying kicks at helicopters. This is the most striking image of Prototype, and it’s persisted long after the forgotten narrative justification as to why these rotorcraft deserved such a thorough punting.

To the people who fondly remember the empowering feeling of boot slicing through steel, I bring you good news: you can still attack helicopters with flying kicks in Prototype 2. It is positively encouraged, even, though it does take a good few hours to unlock.

There are new things in developer Radical’s revamped anti-hero template, of course, but it’s the tried-and-tested moments that are still the game’s finest, and when your super-powered repertoire neatly segues between slicing through a gaggle of foes, running up walls and leaping through the air like a Golden Age Superman, you occasionally stop and think, hey, this is pretty fun.

Which is nice, because the original game wasn’t always that fun, especially when it was spamming you with a hundred burly enemies and dozens of nasty rockets. Thankfully hectic firefights are much easier to navigate now, and a cheeky dodge mixed with some powerful new tendril attacks ensures more efficient and graceful crowd control. Cottoning onto the fact that everyone likes that steady climb towards new bells and whistles, the game also ensures you’re never far from unlocking some new trinket or whizzy biological upgrade for new protagonist James Heller.

Heller is your typical marine with superpowers that look like they’re been yanked straight from H.R. Giger, and then thrown into a New York city that looks like it’s been covered with tar. As you hit the game’s second area, for instance, you’ll unlock the Arm Blade and gain the ability to launch into a swirly-whirly carnage pirouette, one that cleans out an area quicker than playing the One Direction album in a heavy metal club. Even later than that you’ll get the Whipfist, which allows you to yank helicopters out of the sky – just in case you fancy a change from all the flying kicks, you know?

The more observant will have already noticed that most upgrades seem to be about giving your appendages varying combinations of pointy blades, but for those with a sneakier inclination there’s also the new Biobomb, which allows Heller to inject foes with a virus that forces them to rupture open in a nasty tentacle explosion. Prototype 2 can be a particularly grim game, especially when you’re accidentally lopping through crowds of civilians or consuming them whole for a health bonus. As Heller puts it at one point: “now that’s some motherf**king gratuitous violence right there.”

Your mission objectives are mostly the same as in every other open-world game, and much of the game is spent scrapping with enemy mercenaries on the ground and then taking to the skies to ferret out your next confrontation. Movement in the air feels more vertical than horizontal, and gliding in Prototype 2 consists of 10 seconds of blissful soaring before a premature drop back to solid ground. There is some skill in perfecting your graceful ascents and falling-brick descents, and learning when to eke out the glide or hammer your in-air dash gives you a certain buzz.

Taken in the context of kicking helicopters into bits and ripping the turrets off tanks for a laugh, Prototype 2 performs admirably. There’s an impressive array of gooey mutations and upgrades to discover, linked to a system of upgrades birthed from an overall experience bar alongside sniffing out hidden collectibles and completing side-missions, which more often than not requires you to kill a load of stuff and then bask in all the bits. Radical is happy for you to muck about in their infected city as much as you like, and by consuming the right enemies you get access to even more ludicrous upgrades. The upgrade menus are, without a doubt, the real star of the game.

Unfortunately, then, those upgrade menus play second fiddle to the game’s unbearably boring protagonist. Heller never becomes anything more than a cipher, a virtually anonymous marine in a sea of unrecognisable tropes as indistinguishable as the masked NPCs he routinely gobbles. His gruff posturing, especially during the game’s bevy of pre-rendered cutscenes, ensures he comes across as ridiculous, and the master plan he slowly unravels over the course of the game is as dense and indecipherable as Alex Mercer’s original conspiracy plot. The Blackwatch virus is still roaming around, pretty much everyone has a nefarious plan, and that’s about the point that my brain switch off and demanded not to hear any more.

To cut a long-winded story short, all you need to know about Prototype 2 is that James Heller has superpowers and fights nasty people with the assistance of an ex-gang banger priest who also happens to be a pretty decent computer hacker. Sometimes Heller eats people. It’s all connected to some secret experiments that happened in Idaho in the past. Still, at least the evil scientists in this are more threatening than the mostly-impotent Umbrella Corporation.

People who played the original will probably be overjoyed to discover there are no orbs to hoover up, and instead Radical devotes more time than ever to focusing on entrails-splattering hyperviolence. That’s all Prototype 2 wants to be, but unfortunately it traps its golden moments under a muddle-headed plot, arid characters and four times more cutscenes than anyone would ever want. In a post-Minecraft industry there’s clearly enough scope for a game to relish in providing you with the tools and letting you enjoy them at your own pace without the trapping of dreary context, which is clearly the kind of thing Radical wants to make, and its rigid adherence to a traditional open-world format is a shame because it simply makes the game boring.

There have been plenty of advancements to the genre since we last saw Prototype, and this sequel offers some noticeable improvements to combat and a neatly-managed breadcrumb trails of unlocks and goodies. But that’s just not enough. Heller might be able to absorb the minds and organic matter of anyone he touches, but Prototype 2 still lacks a heart.

Heller might be able to absorb the minds and organic matter of anyone he touches, but Prototype 2 still lacks a heart.
6 Good upgrades Heller is boring Poor story Dumb missions