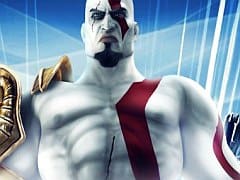 If PlayStation All-Stars Battle Royale’s roster was as packed out as its unwieldy title then SuperBot’s début effort would be on to something. But it isn’t, and to pretend otherwise would be foolish – Sony’s heavy reliance on third-party support to create its sweeping range of iconic characters has backfired here, leaving us with slim pickings wrapped together with an unsentimental presentation that makes zero effort to explain Sony’s fantastic history.

“A very special thank you to all of the PlayStation fans,” declares the game’s credits. But such sentimental reverence rings a little false in a game that seems more keen to peddle the upcoming wares of third-party publishers than pay tribute to the acts that have defined Sony’s golden goose. This is a game that’s happy to show Capcom’s new Dante, currently the unproven star of an uncertain but imminent 360/PS3 reboot, rather than the old Dante that helped define the early days of the PlayStation 2. Such decisions feel cold and cynical, as if the game is a premium advert for upcoming titles mandated almost solely by the demands of executives. I wouldn’t even be surprised if the game’s title screen was using subliminal messaging to flash “PRE-ORDER METAL GEAR RISING: REVENGEANCE NOW” into my brain.

Or, hey, there’s BioShock’s Big Daddy for some reason – currently the only fruit from a partnership between Sony and 2K that isn’t Ken Levine pretending to look interested during Sony’s E3 2011 press conference. Heck, it would have been more fitting for the concept of PlayStation All-Stars if they had spent the money on getting the rights to Croc. Where are the quintessential PlayStation characters? Crash Bandicoot, Lara Croft, Spyro the Dragon, Cloud Strife or Solid Snake?

The whole concept feels lacking somewhat, like if a new Spice Girls album was announced with only Emma Bunton onboard. It’s an endemic problem which runs deeper than the characters, too: there aren’t any nods to Ridge Racer or WipEout in its stages, yet SuperBot seems prepared to double-dip into BioShock Infinite’s Columbia, a locale nobody has ever associated with the PlayStation in its entire storied history, for its inspiration.

Who do we have, then? Alongside the third-party inclusions, the 20-strong roster includes Kratos, Sackboy, Ratchet and Drake as the Sony frontrunners, with lesser-known characters like MediEvil’s Sir Daniel Fortesque, Twisted Metal’s Sweet Tooth and Sony Japan mascot Toro Inoue also making appearances. I’m also quite chuffed to see PaRappa along for the ride, though by the time Colonel Radec starts to make an appearance you can actually hear the barrel being scraped.

As for the arenas, well, SuperBot opts to mix two titles together for most of its stages, meaning the Chop Chop Master Onion stage segues into an encounter with that giant Helghast robot thingy from Killzone 3. At least, I think it’s Killzone 3. It’s a nice idea – and I wouldn’t want to ruin most of the twists and turns – but I don’t think it quite works; more stages designed around singular titles would have allowed for more variety.

Such missteps are tragic, then, as underneath the game’s lacking presentation lies a fairly competent attempt at marrying the frenetic nature of Smash Bros’ party brawls with a more serious fighter. PlayStation All-Stars’ core involves charging up your three-tier super bar with regular attacks and then scoring points by landing your characters’ unique level one, two or three supers, with afflicted opponents exploding into a beautiful shower of crosses, squares, triangles and circles before respawning.

This central mechanic is a textbook example of risk versus reward, because if you whiff that all-important attack you’ll end up with nothing. The higher level your super, basically, the easier it is to land hits and score points, but the more time and energy you have to spend building up that crucial bar. It’s potent enough to cause both delight and frustration, which makes it perfect for the kind of party and multiplayer environments it was born to occupy.

And really, the multiplayer netcode seems absolutely excellent – when it isn’t suffering from the occasional glitch, that is. While the latter seems to be quite rare, in a couple of instances I’ve found my character completely unable to respawn for the rest of a match. But the game seems to be stable and responsive for the vast majority of your time, and SuperBot has crafted one of the most impressive implementations of online play in a fighting game to date. Another nice touch is the use of rolling seasons in ranked play across 2v2 and FFA modes, though it seems a little peculiar that there’s no way to play 1v1 online.

The fact the game can even pull off 1v1 matches is a testament to the scrappy fighting system running through the game’s veins, with SuperBot spending the best part of a year telling everyone this game could work in the professional scene – time well tell if that’s the case, though I certainly have my reservations. The mechanics are in place at least, with evades, blocks, and multiple moves across the three attack buttons, alongside a balanced free-form combo system which neatly prevents infinite loops by cutting off combos once they’ve done a certain amount of damage. You can tell SuperBot has clearly put a lot of thought in the rhythm of its action, and for the most part you’re left with something that manages to entertain but fails to ever truly excite.

Outside of the game’s local and online multiplayer there’s a rudimentary single-player arcade mode which dishes out a brief procession of stages with a specific rival fight (and CGI accompaniment) and eventual showdown with the original PlayStation mascot Polygon Man. This is tied together with low-budget animated opening and closing cinematics which, well, aren’t really very good. At least SuperBot has an occasional sense of humour about the whole thing: Evil Cole takes on Fat Princess, for instance.

The game’s presentation feels a bit half-finished, sadly, with cheap menus and a dearth of single-player modes. You can customise your playercard with all sorts of unlockable icons, backgrounds and titles, for instance, but the ugly graphics and joyless text doesn’t exactly make it all that much fun. At least there’s a comprehensive practice mode, which suggests SuperBot prioritised on the most important parts of the package.

For all of SuperBot’s noble efforts in creating an accessible yet technical fighter, you can’t play PlayStation All-Stars Battle Royale without ever feeling like something crucial is deeply lacking. The weak roster and poor presentation actively works against the title, and while there’s enjoyment to be found this is a game that’s highly unlikely to stick in your mind or, more vitally, ever be asked for at parties.

This review was written after spending 10 hours with a debug version of the game, patched to the latest version, provided by Sony. The game was played over an Internet connection on the game’s retail online servers. Retail code on the PlayStation Vita version was also tested.

You can't play PlayStation All-Stars Battle Royale without ever feeling like something crucial is deeply lacking.
6 Fantastic netcode Presentation feels a bit cheap Where are all the characters? Some characters and stages feel cynical