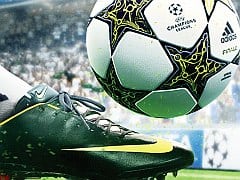 Pro Evolution Soccer has steadily defined itself as an arcade experience over the years. Its instant playability remains a staple of the series that continues to suffer under FIFA’s success. Much like the greasy-haired prima dona on the front cover, Konami’s franchise would have been the best in the world if it wasn’t for one other competitor. The battle for supremacy between Cristiano Ronaldo and Lionel Messi has been closer than ever this past year, an analysis that seems to have transcended into virtual form.

Ronaldo’s playing style represents what this annual addition is all about: pace, trickery and stunning goals. PES wants you to overcome the threat of opponents with neat footwork and stylish play. It begs you to dribble past that extra man, creating space for teammates to run into. Konami has worked hard to uncover a set of tools that allow you to play attractive football on each of the game’s difficulty settings. If you’re inventive enough, even the most daunting of tasks can be overcome with a hint of flair.

The series has needed a mechanical tweaking since the current generation began. Thankfully, plenty of effort has been spent developing a system that will excite players of all abilities. With Shingo ‘Seabass’ Yakatsuka at the helm Pro Evo defined itself as a game for everybody. While Seabass is no longer in charge, his influence remains.

The philosophy of the old coach is still visible across the pitch. Default passes snap to recipients as if guided by laser, and shots ping with the velocity of a boot flying across the Manchester United dressing room. Tackling isn’t something that needs to be strenuously practiced. If you forget to put a foot in at the right time, it’s unlikely you’ll be punished for the mistake. On the surface this is the Pro Evo we’ve come to expect. Slick attacking football is the headline act, but it’d be foolish to write this off as just another annual update.

A trip to the tutorial section will underline a product that is finally gaining some ambition. An abundance of new techniques beg for your time and patience. All serve a practical purpose, eradicating the game of inconsistencies that have appeared before.

Impressively, manual play can be used throughout any match. By holding LT, any pass or shot can be placed exactly where you want it. Such precision allows experienced players to unlock defences with one through ball, lacing each offensive manoeuvre with potential. Manual shots take a little longer to execute properly but become hugely successful once the botched attempts are gotten rid of.

Dribbling has undergone a process of evolution. Average players will find it harder to bypass the opposition this year. The application of speed is less important than before, as skill and positioning emerge as key ingredients to victory. Deft Touch Dribbling allows you to take close control of the ball. Whether you’re ushering the team forward at a thoughtful pace or craftily turning away from danger, the pig’s bladder can be manipulated with expert finesse. Alongside Player ID, which allows you to pull off signature moves from decorated showmen, the clever use of both feet will separate accomplished players from the riff-raff.

This diligence on the ball is reinforced by an impressively ambitious A.I system. Your colleagues love to get forward and regularly sprint up the wings to provide a greater threat. The role of the modern fullback is fully replicated as they bomb into space without a second thought. Forwards lurk on the shoulder of the final defender, anticipating key passes with the eagerness of Wayne Rooney receiving his brothel pocket money. Decisions must be made quickly. If you take too long to execute a pass or fail to strike the ball at goal, expect the momentum to shift.

A general understanding of these minor additions should be learnt before entering this year’s Master League. Now under the header ‘Football Life’, the career mode has taken a bit of an odd turn. After creating your stereotypical manager you’ll be introduced to the press and backroom staff at your chosen club. Your secretary will provide advice through a series of meetings, underlining vital conditions via text instruction. It’s a slow way of doing things.

Between each match you’ll have to wait for the calendar to advance. Every few days progress is interrupted with another meeting. Information on your next opponent may be highlighted, or an update on transfer negotiations quickly rounded up. It’s difficult to understand exactly what Konami was aiming for here. You’re advised to bring in new players when possible, but transfer negotiations are fruitless. By selecting a target’s name your agents will try to capture a deal. A few days will pass before the result appears. If unsuccessful, no feedback is given as to what you could improve on.

Player ratings are also completely haywire. How Joey Barton is rated higher than the likes of Frank Lampard is beyond me. Recent form (or at least form in the last two years) doesn’t seem to be accounted for, as Ronaldinho remains near the top of the overall list. Perhaps this will be amended in an online update. Right now, I’m surprised Joseph ‘Nietzsche’ Barton isn’t spouting philosophy on Twitter about how PES 2013 shows he should be in the England squad.

A multiplayer Master League campaign is also included. At the time of writing the online servers were yet to go live, so any global action can only be speculated on. This promises to introduce a working transfer market akin to FIFA 13’s Ultimate Team. If Konami can ensure any connection issues are overcome, I’m confident it will be a success.

As ever, this remains the quirkier of the two football titles. Most licenses continue to go missing, although this will hardly deter seasoned veterans. Player likenesses have been improved upon, and Cristiano Ronaldo’s full motion-capture sessions look stunning in motion.

Less time has been spent compiling the soundtrack, which includes a handful of irritating songs. Within an hour’s play you’re likely to have hated, loved and then turned off the entire package. During each match, the robotic quips of Jon Champion and Jim Beglin underline a title that has its priorities elsewhere for the time being.

PES 2013 manages to do something only the best arcade experiences achieve. It offers playability to those who want to dip their toes in and hardcore techniques for the serious gamer. Like a beat ’em up that takes years to master, plenty of button combinations must be learnt when playing at the top level. Konami’s latest outing shares the same values as arcade stalwarts such as Tekken, offering a sense of achievement for every individual that decides to press start. Like the cover star, this title does have the odd breakdown. Even so, it’s the finest Pro Evolution Soccer we’ve seen since Ronaldinho legitimately was the best player in the world. Will it oust FIFA 13? Let me ask you this: who is better, Ronaldo or Messi?

PES 2013 manages to do something only the best arcade experiences achieve. It offers playability to those who want to dip their toes in and hardcore techniques for the serious gamer.
8 Instantly playable for everyone Plenty of game-changing techniques to learn Master League is slow to get going Presentation remains poor