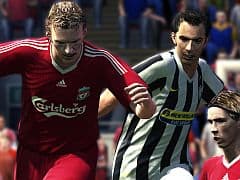 It had been hoped that Shingo “Seabass” Takatsuka and co at Konami would do what EA did four years ago and invest in a completely new game engine, employing a revolutionary start-from-scratch approach. Unfortunately those hopes have been dashed. Bar the addition of a few new animations, a slight slowing down of pace, some new officially licensed teams, and team tactics and player ability features that are destined to be cast aside unused by the vast majority of players, PES 2010 is PES 2009.

Playing and reviewing FIFA 10 a few weeks before PES 2010 does the latter game no favours. In comparison, PES 2010’s players feel sluggish and unresponsive. PES has always felt this way to a degree, but it’s never been so pronounced. The ball moves with minimal realism. Run animations are as robotic as ever. Cross field passes often trigger kicking animations that defy the laws of physics. Shooting motions fail to convince.

Take, for example, basic wing play. In PES 2010, directional changes and actions are “buffered” into the game. This is how most sports games work, but here a change in direction will often see your player frustratingly run the ball out of play a second after you’ve inputted the command. The same problem causes comical own goals, with defenders running balls into their own net as you helplessly hammer the opposite direction. PES fans have long accepted this mechanic; FIFA has shown it to be unacceptable.

For all the changes Konami has implemented, traits that have marred the series for years have been frustratingly ignored. Keepers can quickly underarm roll the ball to defenders, but, seemingly uncontrollably, sometimes they will annoyingly bounce it before throwing it out. Konami has slowed down the pace of the game in an effort to make it more realistic, but the ball still zips about as if bouncing around a grass covered pinball table. 360 degree dribbling allows more control over player movement, but the animations that come with it aren’t convincing. It’s easier to successfully nail slide tackles, but they often send recipients flying off in silly directions. Keepers are vastly improved shot-stoppers, but they still parry shots into onrushing strikers’ paths with annoying regularity. It seems that for every minor gameplay improvement Konami has implemented, there’s a frustration denting its impact.

This is no more apparent than with the new Team Style and Playing Style Cards features. Team Style, theoretically at least, allows you to tweak the way your team plays. You’re able to change the degree to which players switch positions, how compact the team stays and the defensive strategy, to take three examples. The default settings of the more famous teams will make sense to most football fans: Manchester United’s Position Switch is set to 80, meaning players will switch positions regardless of favoured positions. Chelsea’s Pressing is set to 75, meaning players will chase down and try to dispossess opposition players at any distance. Arsenal’s Support Range is set to 70, meaning players will provide close knit support for the man in possession.

In theory, the concept is sound: with it you should be able to affect off the ball movement to an unprecedented degree, forging an identity in much the same way the likes of Barcelona and Arsenal have. The problem is, in an actual match it’s incredibly difficult to see that it makes any tangible difference. There’s nothing in-game to explain the feature, or to show the impact of your changes. As a result most won’t even realise Team Style is in the game. And of those that do, only the ultra hardcore will spend time with it.

It’s a similar situation for the confusing new Playing Style Cards system. There are three types: Attack Level Cards, Playing Style Cards and Skill Cards. An Attack Level Card lets you set a player’s inclination to attack or defend. You’re able to choose between Attack minded, Defence minded or Balanced. For example, Didier Drogba has an Attack Level Card set to Balanced, meaning he will look to strike the right balance between attack and defence. But you’re able to change this to Attack Minded if you want him to join in the attack whenever possible. As with Team Style, the Playing Style Cards system is better in theory than it is in practice. It’s a system that you’d never know existed unless you went searching for it. When you do find it, it’s convoluted and difficult to grasp. And, again, its benefits are not immediately obvious.

And yet despite all these frustrations, PES 2010 still retains an odd addictive quality, one that’s fuelled by a strange sense of satisfaction experienced whenever you score a goal. This has perhaps been PES’ greatest strength down the years. You could happily play PES 2010 for hours, enjoying its more comical, arcadey moments totally oblivious to the sky-rocketing bar that’s being set by the competition. Indeed, if you’ve stuck steadfast with PES in recent years, PES 2010 will no doubt impress. Playing it, especially with friends, is fun. The only problem is you could be having more realistic fun elsewhere.

It’s not all doom and gloom. As mentioned, PES 2010 is a more enjoyable experience than PES 2009, but in some areas it’s even better than FIFA 10. Of these the most notable is player faces, which are on the whole the most lifelike ever seen in a sports video game. The England team is bang on, as are most players from elite clubs: Torres, Gerrard, Rooney, Lennon, Terry, Kaka, Ronaldo and Messi all look incredible. The player faces are so realistic that PES 2010 is perhaps the only football video game where the entrance scenes are worth watching.

PES 2010 looks crisper than last year’s effort, and thankfully there are no framerate issues at all. But the pitch view still looks somewhat dated and smacks of a last generation PES in high definition, albeit less so than in previous versions. The number and quality of the animations, as well as the physics of players and the football, are a huge influence here, but PES 2010 still doesn’t look as “Sky Sports” as FIFA 10.

While the menus have been given a makeover with an edgy magazine lick of paint, text is often wooden and reads like a Babel Fish translation of a foreign language. Despite a convincing effort from Jon Champion (the less said about pundit Mark Lawrenson the better), the commentary is appalling. It’s often seconds behind play, and at worst has nothing to do with what’s actually happening on the pitch. Champion will scream that the referee’s about to blow his whistle as if England are about to win the World Cup. Shame he does it just before half time.

The number of official licenses has been increased, but the Champions League license still, ridiculously, does not include all of the teams that are actually in the competition. So while Liverpool and Manchester United and 15 other European club teams line up with real badges and kits adorning their players, all to that iconic entrance music and night time paraphernalia, the likes of Chelsea (aka London FC) turn up in plane old blue kits. Oh, and while we’re on the subject of authenticity, why are all players not at their real life clubs? With the transfer window ending the first day of September, is there any good reason why Richard Dunne is still at Manchester City, or Arjen Robben is still at Real Madrid?

Thankfully, Konami’s efforts to bolster and improve the long-running Master League, an offline fan favourite, are largely successful. You’re now in control of club sponsorship, which is a nice touch even if it involves silly fictional companies. The menu is a much more pleasant place to explore, split as it is between three distinct areas: Club House, Stadium Walk and Office. The new, officially licensed rock heavy soundtrack, which includes hits from Klaxons, Kaiser Chiefs and DJ Shadow, is a vast improvement on the brain-melting cheese fests of previous years. Transfers seem suitably realistic, too. As Chelsea, my day one pursuit of Ronaldo, Rooney and Messi were knocked back. I managed to prize Michael Owen from Manchester United, however, for a princely sum of £20 million. With the classic Master League players enabled (go Valeny!), I was only able to snag strikers Louis Saha and Craig Bellamy, both for vaguely realistic prices. By all accounts, Master League will prove a popular home for fans that prefer the single-player PES experience, and compared to FIFA’s Manager Mode, which has proved something of a buggy mess, it scores points for at least working.

At the end of the day, though, PES 2010 is simply not good enough to challenge FIFA’s dominance. It’s an improvement on last year’s effort, and fans of the more arcadey virtual football will find plenty to enjoy, but as a simulation it pales in comparison. PES 2010 is a return to form, but it is not a return to past glories. PES fans that have crossed over to FIFA in recent years need not concern themselves with switching back. Perhaps it’s best to use a real world analogy: if FIFA 10 is Manchester United, then PES 2010 is Aston Villa. Despite flashes of class, only one team is capable of winning the Premier League.

If FIFA 10 is Manchester United, then PES 2010 is Aston Villa. Despite flashes of class, only one team is capable of winning the Premier League.
7 Better Master League Fun, arcadey football Unrealistic animations Team and player strategy features miss the mark