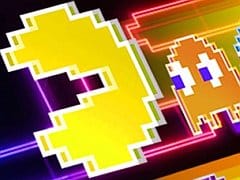 Wakka wakka wakka wakka wakka. WAKKA. Okay, I’ve got it out of my system: Pac-Man Championship Edition DX, then. For a start, no it’s not just Pac-Man. The hungry little three-quarters of a pie-chart is up to his same old tricks – wolfing down stuff like fruit, keys and enemy ghosts – but in some very fancy new clothes. Just two years after the first Championship Edition, Namco Bandai has once again intelligently built upon – and suitably drop-kicked into 2010 – one of the most famous arcade games of all time.

From the outset, Championship Edition DX is a beefier package than 2007’s effort. The number of selectable stages has been increased from two to eight, and a whole bevy of visual styles – hearkening back to Pac-Man’s various looks over the years – are included for an extra whack of aesthetic sparkle.

But the most discernable difference is that Pac-Man isn’t always immediately chased by Blinky, Pinky, Inky and Clyde. Instead, the sallow pill-popper catches most of the ghostly quartet’s extended family napping, waking them up when he drifts past. Masses of ghosts now line up behind Pac-Man like a Post Office queue during lunch hour. The trick, of course, is that biting down on a power pellet and flip-reversing the situation gives Pac-Man ample opportunity to guzzle up dozens of foes in quick succession; as with the original Championship Edition, chaining together enemy consumption in one ‘powered-up’ phase boosts the score to a max of 3200 per nibble.

Furthering some of the concepts conceived in Championship Edition, the general idea (in Score Attack mode, at least) is to stay powerful for as long as possible – though power pellets are now mostly stored inside enemy ghosts, and are therefore only obtainable when you’re already juiced up. Served up in five and ten minute varieties, gameplay flip-flops between two sides of the maze, and eating a piece of fruit on one half replenishes another field of pellets (and ghosts) on the other. The goal, then, is to juggle the back-and-forth between both chunks of the map while simultaneously trying to pop the nearest ghost for more power before you run out of steam.

Another challenge comes from the juddering increases in pace, with the action speeding up depending on how well you’re doing at any given time. The game does an excellent job of placing each new power-up just out of reach, often forcing you to rethink strategies and cautiously hover your thumb over the reset button, considering another foolish attempt at a perfect run.

Other modes include a standard bevy of Time Trials, where fruit-to-fruit manoeuvring is more important than chowing down on ghosts. These trials also manage to do a good job of teaching you the tricks and rhythms of each particular maze, whereas Ghost Combo scores you on how many enemies you can devour in one lengthy powered-up streak. The tricks you’ll learn in both modes will encourage you to go back into Score Attack for another attempt at your personal best.

Yes, this is one of those games: perseverance is rewarded by higher scores, and higher scores increase your standing on the online leaderboards. Despite indulging in another lick of those snazzy day-glo rave surroundings and bass-heavy beats, Pac-Man hasn’t strayed far from his arcade roots.

Thankfully, all progress is fed straight into your online rankings. Each maze has its own leaderboard for five and ten minute Score Attacks and Ghost Combos, as well as a cumulative effort for the many Time Attack levels; the temptation to zip back into a stage to have just one last go is usually too much to resist.

The biggest shame of the entire game, however, is Namco’s failure to bring the leaderboards up to the level of its contemporaries. You have to wade through far too many menu screens to get the required information, and while you can see both your personal score and that of your friends list, you can never see both on the same screen – an absolutely baffling design decision, frankly. The game’s leaderboards are a step in the right direction, but another prominent example of how Japanese developers still aren’t on par with their Western counterparts when it comes to online integration.

But Namco’s other modern modifications – the game’s veritable abundance of sneaky nips and tucks – are often nothing short of genius. Get close to peril, for instance, and the screen will zoom in while the action slows to a crawl. This allows you either a few seconds to make a last-ditch attempt at a getaway or an agonising close-up of your impending failure. It’s a genuine pride-killing moment to see your high-score attempt ruined, in slow motion, during the last moments of a game.

Bombs have also been added to the right trigger, allowing you to blast away (but not kill) an entire conga line of baddies. This move has clearly been influenced by the shmup genre the likes of Geometry Wars 2, but these get-out-of-jail-free moments don’t dumb the game down: their score-punishing side effects means they’re only ever used as a painful admission of failure.

What’s most surprising is how Namco’s excellent arcade game has arrived out of nowhere. A title of this quality could surely have stood proud amongst the best of what XBLA’s Summer of Arcade and Game Feast promotions had to offer, making its bizarre through-the-backdoor entrance all the more confusing. But when the actual game is compared to the finest of its score-hungry contemporaries – Trials HD, Super Stardust HD and Geometry Wars 2 – Pac-Man Championship Edition DX is a titanic event of equal worth.

Namco Bandai has once again intelligently built upon - and suitably drop-kicked into 2010 - one of the most famous arcade games of all time.
9 Feels contemporary. Very addictive. New features jazz up the game. Online leaderboards could be better.