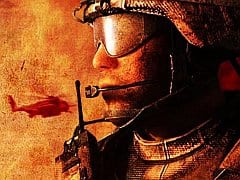 For all the hoo-ha about switching Operation Flashpoint to a more action-orientated position in its third iteration – the looming spectre of Modern Warfare’s success perhaps a little bit too much for Codemasters to resist – I still found myself face-down in a puddle of my own blood within six minutes of starting the game. Seriously, who could have guessed bullets were so dangerous.

Realism is a word often bandied about in the games industry without any genuine consideration to what it means. Is Operation Flashpoint: Red River realistic? No, because no matter how many times you get shot in the chest you can, provided you’re still clinging to life, recover by waving a closed medikit around in front of you for fifteen seconds.

Compared to Call of Duty and its ilk, however, Red River presents a fairly authentic portrayal of a contemporary middle-eastern conflict, albeit one where you spend the second half of the game knocking back wave upon wave of Chinese soldiers. Bullets drop the further they’re asked to travel, enemies crumple to the ground after being shot once, and the wide-open expanse of natural geography is not precisely coordinated for maximum set-piece potential.

So while the new Operation Flashpoint forks further away from its simulation origins set by former developer Bohemia Interactive, Red River still forces you to cling to life because of the inherent frustrations of going back to a faraway checkpoint and trawling through the same content multiple times. You fear for your survival because bullets are dangerous, your virtual life is delicate, and failure will probably mean slowly traipsing across another few hundred metres of terrain.

While the game has sacrificed the pursuit of realism in its combat, Codemasters has made a renewed effort to capture a sense of atmosphere from contemporary war media. Compared to the showroom-fresh sheen of their Dragon Rising iterations, for instance, vehicles have been dirtied and adorned with pin-up girls – get in a Humvee and it now feels like the machine has seen plenty of action in harsh environments. You can also notice this in the script, with exquisitely-produced mission briefing sequences and a Staff Sergeant that barks orders in-between relentless streams of swearing and racial epithets. If you don’t want to hear the Chinese negatively associated with their cuisine, you won’t like listening to this.

The 10-level campaign has you originally chasing terrorist insurgents in Tajikstan, a country sandwiched between Afghanistan and China. The early campaign is chock-full of the types of current military operations you’ll expect – IEDs, sweeping through buildings, calling down airstrikes and the like. One early event has an allied transport blown to smithereens mere inches away from your gruff Staff Sergeant, but both the script and animations barely register the incident on his face. The game might be doing its best to evoke the atmosphere of Jarhead and The Hurt Locker, but Red River isn’t running on an engine that can adequately convey the weight of the situation. It’s also particularly jarring when buildings and terrain appear as pixelated lumps through your sniper scope, though draw distances are impressively vast.

Enemy AI also falls flat on numerous occasions, too, notably in the second half of the game when you’re up against the Chinese army. Far too many encounters at this point are simply enemy squads rushing you without any consideration for their own survival, and you simply perch behind a spot of nearby cover and take pot-shots until a checkpoint reached message pops up in the corner of the screen. A flimsy suppression mechanic does little to the overall gameplay rhythm, and the sense of authenticity is lost when you’ve knocked off three quarters of an enemy squad and the remaining troops are still standing around while you line up another shot.

Despite this, however, certain moments are transcendental. When you’re forced to call down a mortar strike danger close, scan the faraway horizon to spot snipers, or you’re warned about enemy armour awaiting you around the next corner, the feeling is one of nervous tension and immediate panic. Diving to the floor to avoid fire quickly becomes a natural instinct, and each moment you realise you’re going to have to clear an enemy-infested building is excitingly agonising.

But you’re not in it alone. The focus is now firmly placed on playing the game as a four-player co-op experience rather than trusting the inevitably wonky AI team, who still have an odd penchant for hoovering up bullets and running through your line of fire despite being significantly improved from their previous iteration. Your fireteam of four is nestled within a US Marine squad of twelve, and your trio of squads crisscross in complementary fashion as they move through the open areas, with AI fireteams also providing jingoistic radio banter.

Players choose between four loadouts – Rifleman, Scout, Auto Rifleman, and Grenadier – with additional weapons and equipment being made available as you progress through the respective class trees with experience points accrued from completing missions and scoring kills. One player is designated fireteam leader – which is you by default if choosing to play with AI – and is able to issue commands from a radial menu alongside requisitioning combat munitions when available.

Finishing levels gives you a bronze, silver, or gold rating, and points scored here can be spent on boosting overall attributes such as sprint speed and tactical awareness. These are undeniably mass-market additions thrown to court the general shooter player, of course, but affixing a level to each class affords a clear sense of personal progression.

There are also eight brief Fireteam Engagements vignettes for teams to get stuck into, with two maps provided in each of the four modes. These range from standard stuff, such as a wave-based survival mode and knocking out hostiles against the clock, to rescuing chopper pilots and ensuring an allied convoy passes safely through an area. If you get a talented squad together you can easily bash through these in a couple of hours, though the mode is an obvious target for DLC.

Still, the culmination of these changes will undoubtedly incense Flashpoint’s core contingent of simulation fans, but the campaign here is of far higher quality than Dragon Rising’s offering. Those seeking further challenge can opt to play on Hardcore, which boosts the accuracy of your enemies while stripping away the HUD and mission checkpoints, and while this makes friendly fire incidents more regular it doesn’t particularly make the game feel any more realistic.

It’s a real shame that Codemasters hasn’t created a more involving set of missions with Red River, its campaign sagging at both ends of its entertaining middle, and while their attempt at streamlining the experience lessens the series’ frustrations, the core game will still prove too delicate for many players. Operation Flashpoint: Red River does a good job of capturing the spirit of war, but it sadly fails to capitalise on its lofty ambitious.

Operation Flashpoint: Red River does a good job of capturing the spirit of war, but it sadly fails to capitalise on its lofty ambitious.
7 Shooting is intense Excellent in co-op Too difficult for casual shooter fans Campaign is weak at the start

Taking a small step into the future, Red River depicts a fictional…

Taking a small step into the future, Red River depicts a fictional…