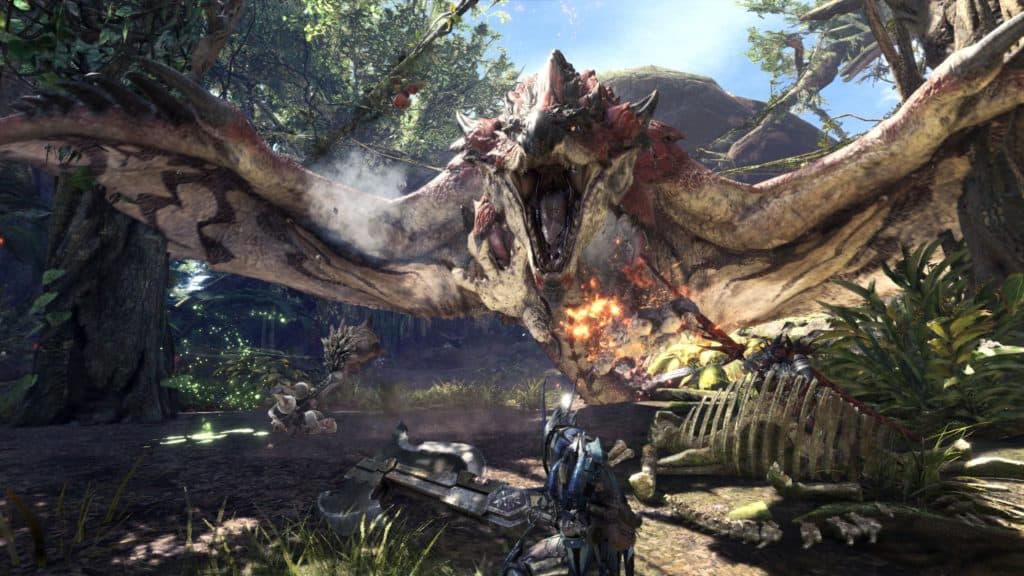 There will probably, whilst playing Monster Hunter: World, come a moment that delivers unto you an epiphany: oh wow, this is really good, isn’t it? It might be when you notice that the carrier ants trailing in a line over the ground are actually carrying things you can pick up. Or when your colleague sees a Great Jagras swallow its prey whole for the first time and doesn’t know how to handle it. Or when you realise that you can craft an outfit for your feline Palico companion that makes it look like a ladybird.

As a member of the Fifth Fleet, the latest group of hunters to follow an elder dragon to a new world, you’re tasked by the Research Commission to explore the land and study the new species of wyverns you encounter. For ‘study’ read ‘bring ’em in, dead or alive’, but the monsters won’t go down without a fight either way.

First you’ve got to prepare. If you’ve fought this monster before you might know its weaker to poison, and ‘cos you’re a good tracker you know where to get some toadstools to craft poison smoke bombs. If it’s a flying monster you might want to head back to base and visit the smithy, where you can forge a more mobile or ranged weapon that’ll be better for this hunt than your giant hammer. Visiting the smithy before and after each hunt will soon become a highlight of your game, like visiting the sweet shop after school: each new monster you face opens up new armour and weapon upgrades, and some of them are fabulous. I’d not expected fashion to be a key element of Monster Hunter, but within a couple of hours I was accessorising my Palico cat companion in a cute outfit to offset mine.

Then you’ve got to track the sucker. Find its footprints, or evidence that it’s passed by recently. When you’re new to an area you won’t know where to look, but once you’ve been around the pass a few times you’ll know where you can pick up the trail of the egg thief Kula-Ya-Ku, and where the Barroth goes to roll in mud to armour itself. Monster Hunter: World has some stunning, complex ecosystems to explore: the humid jungle of the Ancient Forest, riddled with vines, subterranean tunnels and exploding toads; the arid desert fed by shining waterfalls that we call the Wildspire Waste; the Coral Highlands, a beautiful, towering reef without any water, full of strange, colourful monsters; the Rotten Vale, the stinking, poisonous monster fall that feeds it all, as a whale fall feeds the ocean.

Then you’ve got to bring it down. Difficulty scales a bit with the size of your group, so it’s always going to be a tough fight. At the start the monster has the upper hand; it’s stronger than you, bigger than you, and it’s probably got big teeth or spits ice, or some other wholly unnecessary trick of evolution. But you’re smarter. So you chip off its armour. You enrage it to tire it out. You cripple its wing so it can’t fly away. As the battle progresses the monster realises it’s losing and will run back to its nest. It will limp, move more erratically, stagger easily, and let out mournful cries that almost make you feel sorry for it. But when you finally bring it down it’s nothing short of exhilarating.

The monsters themselves all engage in varying but understandable behaviour (flying ones nest up high; territorial ones stomp around the area a lot), so every hunt is different even if it’s against a monster you’ve hunted many times before. They are, by turns, beautiful and appropriately horrifying creatures, and all suit the living, breathing ecosystems they’re a part of. Though you will start to see a few reskins here and there as you go on, they’re not lazily done, and you can think, well, if a Rathalos from the Forest lived here in the Coral Highlands it would probably evolve like that anyway. Observing the ecosystems in action is half the fun anyway, as you work out what feeds what, and watch the monsters get into scraps over territory.

Monster Hunter: World is the first entry in the series to release in Japan, North America and Europe simultaneously, with most of its previous forays to the west coming on handheld consoles rather than the big bricks under your telly. It’s consequently the first Monster Hunter to have cross-region multiplayer, and whilst World leverages the power of current gen to create some amazing, seamless maps, the multiplayer isn’t as streamlined. Grouping up with your mates is a bit of a fiddly process involving swapping guild cards, and you can’t drop in on hunts when you see the alert pop up without first heading to a quest board. Once you get the hang of it, it’s easy enough to post your own quests or join in on another’s, but it still feels there’s maybe one step too many involved for a game with an online focus.

Playing with people is a lot more fun than playing by yourself, for all that you feel like a destroyer of worlds for taking down an Anjanath alone, because you get to plan together and work around your different skills and inventory. You have to be quite precise in combat, as dodging a foot in the wrong direction can see you lose a big chunk of health, and the targeting locks your camera on the monster but not your attacks, so you can still swing entirely wide if you’re not manually aiming properly. Bigger baddies can inflict bleeding, freezing, burning and poison, which can stack up pretty horribly, but on the other hand you can craft all manner of offensive and defensive tools as well as using the environment itself. Kick one of the aforementioned exploding toads and it’ll emit a paralysing cloud of spores. A hunter using broad strokes can get the job done, but a hunter that pays attention to the details will get it done well.

Just so with Monster Hunter: World. It’s a giant game with giant monsters, but the devil is in the detail. When you stand in the desert you can watch a dung beetle make slow, inexorable progress over the sand, and then you can steal the dung, and then you can launch it at a monster. There’s a canteen at the hub town (which is built out of wrecked ships) and it’s run by a Meowscular Chef who yells about bulk and gains and protein whenever you visit. One of the hats you can craft for your Palico gives it a little moustache. Your Field Guide has beautiful little geometric illustrations for each monster. And you can jump on the back of a giant, feathered dinosaur, welly it with an axe, and make those feathers into a cape. All together, Monster Hunter: World is sublime.

Available on: Xbox One, PS4 (reviewed on)

This long standing series makes an outrageously good current gen debut. The size and scope of the environments, and the monsters in them, is awe inspiring, making Monster Hunter: World a true (lizard) king of games.
9 Stunning environments Amazing variety in weapons and gear Titular monsters are well cool Beautiful attention to detail