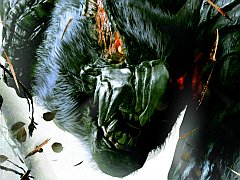 Monster Hunter Freedom Unite, Capcom’s MMO-style third-person hack and trap-em-up, is soul destroying. It’s monstrously difficult, the combat is clunky and it’s as slow as a turtle that’s carrying 20 turtles on its back. And yet it’s phenomenally popular and adored by critics. This is the great conundrum. How can a game so frustrating be so addictive?

Let’s start at the beginning. I’m new to Monster Hunter. My hands-on at Capcom’s Captivate 09 event in Monaco earlier this year was the first time I’d touched a Monster Hunter game. Normally, we try and pair games with reviewers who either have an expertise in the genre or at least a familiarity. But Capcom’s pushed Monster Hunter Freedom Unite as the Monster Hunter game to lead the PSP’s resurgence in the west and tempt newcomers in, so surely that wouldn’t be a problem. That was the theory at least. What follows is a report of my personal experience with the game.

You begin by creating a character – male or female – in traditional video game character creation fashion. Then you’re thrust into the world, exploring a mysterious snow-capped mountain. A wyvern (dragon-like creatures) knocks you unconscious. You wake in Pokke Village, a heart-warming hub full of generous locals and surrounded by snowy mountains and icy caves. It acts as your base as you begin your life as a monster hunter. You’re given basic armour and the choice from a number of weapons, a choice that determines your class – in Monster Hunter there’s no levelling up through experience points. Instead, self improvement comes from upgrading your weapons and equipment and acquiring new skills. The sword, for example, is a combo-focused, agile weapon that allows the use of items while blocking. The Monster Hunter philosophy is thus: slay a monster, skin its corpse for coveted materials then craft some badass kit from it.

There are pages of eye-watering text to digest almost immediately. Pages of instructions on how the game and its various nuances work – material gathering, material delivery, item combining, mining, skinning monsters, exploration, quests, guild cards, bonkers mini-games, cooking, fishing – and that’s not even half of it. Normally in games I’d skip faster than a boxer in training, but in Monster Hunter you’re forced to soldier through everything because if you don’t the game won’t make any sense whatsoever.

As a Monster Hunter newbie, I thought I’d give the Training School a shot to get a handle on the game. Five hours later I wasn’t halfway through it. In the end I gave up this nightmarish tutorial and decided to get something productive done. The village chief has five quests, combining gathering and slaying, designed to get you going. The first three were okay, but the fourth, called Sinking Feeling, wasn’t. In fact it proved so mind-numbingly impossible that I almost smashed my PSP into my own forehead. I’d say “Sinking Feeling” is the most aptly-named quest in a video game ever, but it’s a horrendous understatement. Here’s what you’re supposed to do:

It sounds simple enough: deliver three Popo Tongues to your red chest. The only problem is the monsters that you carve the Popo Tongues from are surrounded by the very wyvern that knocked you off the cliff at the beginning of the game. This giant git kills you in two hits – its charge and knock-down attack is pretty much an automatic game over. I spent a total of four hours dying over and over again on this mission while travelling on a train from Edinburgh to London. This was no normal video game brick wall, this was a galaxy-sized brick wall designed to keep the aliens from invading earth. Monster Hunter Freedom Unite provided me with a roller coaster ride of emotions: first anger, then hate, then pure, uninhibited depression. Sigh.

The game wouldn’t be so frustrating if it wasn’t for the excruciatingly clunky combat. There’s no target lock-on feature, which causes most of your attacks to whiff into fresh air as quick-moving monsters laugh at your pathetic efforts. Because of this the camera is relied upon to provide a solid view of the action. Unfortunately Monster Hunter’s camera is one of the worst ever seen in a PSP game (and there are some awful cameras in PSP games). You’re able to centre it behind your character with a tap of the L button, but it frequently gets stuck under the ground, inside giant monsters and behind walls, and it’s incredibly difficult to keep you target in your sights. Gah.

Then there’s the astonishingly poorly-designed item/weapon use system. To use an item in the heat of battle you have to put your weapon away by pressing the square button, hold L, cycle left and right through your items with the square and circle button, then let go of L and press square to consume. Putting away your weapon requires an animation, as does consuming an item (like a health replenishing potion). When I wasn’t accidentally consuming potions instead of slicing thin air I was being repeatedly knocked down by rampaging monsters. Frustration isn’t strong enough a word.

My confidence shattered, I found myself wondering if I simply didn’t get Monster Hunter. I found myself apologetically telling my PSP: it’s not you, it’s me. There is an element of truth to this: Monster Hunter isn’t for everyone. It requires a degree of patience a lot of modern gamers simply won’t have. It’s massively in depth, and has more hours of gameplay buried within its virtual innards than perhaps any game on the PSP. And I can understand why it’s so addictive for some – it’s hard not to catch the MMO bug, one I had myself with World of Warcraft, from the game – the psychological motivation of ‘just one more quest’ is hard to resist when new and improved armour and weapons are just around the corner.

When I got back to the office the rest of the team could see me toiling with the horns of this dilemma of a game. Seb and Chris, both massive Monster Hunter fans, attempted to explain the game to me. You should cancel attack animations with evading rolls, they advised. Combat is only half the game, they said. You need to cultivate items on the Pokke Farm, you need to grind the easy quests almost from the get go to harvest the items you need to improve your armour and weapons. You need to make traps and bombs to take down that wyvern. You don’t need to take that wyvern down at all – run away from it. All useful advice, advice I wish the game had given me before my first impression (I say first impression, but it was formulated some 12 hours in) led me to despair.

This is the problem Monster Hunter Freedom Unite faces. Many people will find the difficulty curve so steep that they’ll stop playing before it gets good. This isn’t the fault of the player – if a game isn’t accessible enough that’s the fault of the developer. Even Monster Hunter veterans may find themselves unsatisfied. Freedom Unite is simply too similar to the previous Monster Hunter game – 2007’s Monster Hunter Freedom 2. Seb was astonished to find it almost identical in fact. Bar a new Felyne Fighter system that acts as an AI partner when out on quests, the option to install the game (essential, really – without it loading times are abhorrent), new equipment, monsters and quests, it’s pretty much the same game. Yes you can import your character over, but many hardcore fans will reckon the game more of an expansion than a true sequel.

Much of my criticism of the game would be negated if you were able to play it online – the game supports four-player grouping via the PSP’s local wireless ad hoc mode. This omission is unforgivable – Monster Hunter’s clearly designed to be played multiplayer, as it is so fanatically across Japan. Our wireless games in the office proved a much more enjoyable affair – coordinating attacks and employing strategy was fun, and the combat was less frustrating because its deficiencies are less pronounced when you’ve got mates to help you out. Online play would have given Monster Hunter a chance in the west – the odds of finding other players to play with in the UK are, frankly, remote. Without it it’s destined to remain a niche title. It’s a real shame, as is the title in general. The graphics are great and the core concept is wonderful, so the fact that Capcom hasn’t tweaked the Monster Hunter PSP experience to accommodate newcomers is all the more disappointing. Why hasn’t the combat been improved? Why isn’t it more accessible? Why isn’t the difficulty curve smoother? Online guides and real-life Gathering Hall meets in London are great, but nothing compares to actually making the game better.

I’ve tried to keep this review as personal as possible, because I know Monster Hunter Freedom Unite will go down like cheesecake with fans of the series. It’s one of those classic ‘if you like X then you’ll like this’ games, but I can only call it how I see it. I can only tell you that the game isn’t for me, but it might be for you. If it is, it’s probably the best value PSP game ever released. If it isn’t, then it’s a slow, mind-numbing exercise in masochism.

Monster Hunter Freedom Unite will go down like cheesecake with fans of the series. It’s one of those classic ‘if you like X then you’ll like this’ games.
7 Almost limitless MMO-style gameplay No online play Clunky combat Steep lurning curve