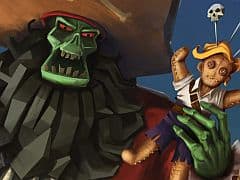 Monkey Island 2 is one of the greatest games of all time: if there were a canon for video games, it would definitely be in it. Day of the Tentacle, Broken Sword and Grim Fandango might have all come out afterwards, but Monkey Island 2 is probably most people’s – especially those who were actively playing them at the time – last great adventure game.

Following in the footsteps of last year’s critically (and commercially, presumably) successful re-mastering of the original, LucasArts has given LeChuck’s Revenge its own special edition. The main feature, like before, is the addition of high-resolution artwork and dialogue from the staple Monkey Island cast. Weighing in at almost a gigabyte on the consoles (and a few hundred megs for the iPhone version), it’s certainly an easier prospect than swapping between 11 floppy discs and dealing with the fiddly (but charming) copy protection system.

The artwork is far more palatable this time around, opting for a chunkier Guybrush (far more apt, if you ask me), vastly superior animations and a better use of colour, which is a far more appropriate fit for the colourful environments of the game. While all of the environments are lovingly updated, it’s still Booty Island – a luscious green and deliriously bright town where every day is Mardi Gras – that both sums up the brighter spirit of Monkey Island 2 and stands out as the game’s aesthetic highlight.

When you get (re)acquainted with the puzzles, something you might notice – I certainly did – is just how much variety you have with your inventory. If you look at a contemporary adventure game, such as something from Telltale, you’ll probably find yourself juggling far less items and, therefore, far fewer possible outcomes to each puzzle. More inventory choice makes Monkey Island 2 a more complex adventure, and subsequently a more frustrating game when you find yourself stuck.

Nothing in Monkey Island 2 is random, but most puzzles manage to create the illusion of seeming like they are. There’s a firm logic behind the game, but for a good part of it (especially if you’ve never played it before) you’ll be scrambling to work out the proper logic when you only know half the solution. That’s a trapping of the genre, of course, but it can feel oddly difficult and a little bit out of place when played alongside contemporary games.

But nobody is buying Monkey Island 2 and expecting a contemporary game, and as a specific example of one particular (now mostly dead, sadly) genre it effortlessly shows off the best it ever had to offer. Split over four lengthy chapters, Monkey Island 2 offers a wonderful challenge and an inventive set of solutions. I cleared most of the first chapter on pure instinct, but the other three-quarters was more taxing than it had any right to be for someone who’s cleared the game countless times already. I’ve not played it for a good few years, admittedly, but Monkey Island 2 is no pushover.

Which means you’ll be investing a sizeable chunk of time searching for magnificent piratey treasure Big Whoop, which Guybrush initially seeks out so he’s got a new story to tell around the campfire but eventually scrambles to locate because it’s the only thing which can protect him from un-undead zombie pirate (and long-time nemesis) LeChuck. It’s daft, funny and impeccably well timed. If you’ve never played it before, expect to devote a few evenings to see the game through to its conclusion.

An in-game hint system has been added to help soften the difficulty, although I was far too proud to use it until I’d already completed the game. For the most part it works well, unravelling each situation with increasingly direct solutions, but occasionally it stumbles or outright fails to detail the necessary specifics of a puzzle. It might tell you to trap the rat, for instance, but it never seems to bother telling you that you’ll need a stick, a piece of string and a third item I’ll intentionally not mention so there’s no risk of me accidentally spoiling the solution. Still, there’s always the Internet if you’re stuck for a solution – people have had almost twenty years to write FAQs, after all.

Just in case I haven’t made myself crystal clear: Monkey Island 2 is an absolutely fantastic game and you should definitely play it. This edition also manages to fiddle with the underlying SCUMM engine and trim out the pauses after every line of dialogue, which turned the delivery of the original Monkey Island: special edition into a stilted mess. Which is nice.

Still, there are some very noticeable instances of the update dropping the ball. Perhaps the most noticeable mishap is the absence of the iMUSE audio engine in the 360 version of the game, which was originally developed by LucasArts to handle seamless transitions of background music. This flaw might only apply to the classic mode – like the special edition of Monkey Island, you can switch between the new fangled special edition and the original graphics on the fly – but will prove a little bit frustrating for anyone looking for an authentic reproduction of one of the all-time greats.

I’m also a bit frustrated by LucasArts’ decision to cut out the game’s opening credits, which features Guybrush chasing off some dancing monkeys and the only part of the game where you hear the theme tune of the original Monkey Island. It’s a minor complaint, granted, but it’s still a bit annoying for anyone who permanently views the original with warm, comforting and sacred nostalgia.

Another promised highlight was hours of audio commentary from Ron Gilbert, Dave Grossman and Tim Schafer, though I don’t think much more than 45 minutes found its way into the game. What has been included is brilliant – although there’s a lengthy discussion about how important iMUSE is, which is a bit ironic – and manages to be both in-depth and nostalgic, but the game’s way of prompting you about commentary can be a little unwieldy.

Admittedly, these omissions don’t detract too much from the game, but it’s still a shame to see LucasArts fail to incorporate them into their special edition. Monkey Island 2 is a sacred property to many – me included – and we expect the game to be treated with an appropriate amount of respect. It isn’t.

The base experience of Monkey Island 2 is still as sharp as ever, though, with some of the wittiest dialogue and intelligent puzzles ever seen in an adventure game. It’s just a shame the “special edition” part is a bit of a letdown – it’s more of an average 2-disc edition than a deluxe Criterion version.

Monkey Island 2 Special Edition: LeChuck's Revenge is more of an average 2-disc edition than a deluxe Criterion version.
8 Great value for money The finest adventure game of all time Little omissions can be frustrating Hint system not perfect

Having defeated the evil ghost pirate LeChuck in his first adventure, pirate…

Having defeated the evil ghost pirate LeChuck in his first adventure, pirate…