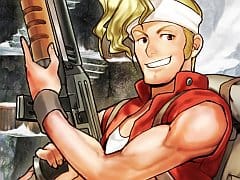 Metal Slug. Curious name for a game, huh? If you’re childish it might make you snigger. If you’re serious you might point out the fact that slugs aren’t metal. If you’re a gamer, however, especially a gamer with a weakness for hardcore side-scrolling 2D shooters, it’ll make you weep with joy.

The Metal Slug series is one held in high regard by its army of fiendishly loyal fans. Trot along to any decent London arcade and you’ll probably find a Metal Slug machine with its seat warmed by someone with a stack of coins and flexible wrists. The SNK series, now in its 13th year (the first game was made for the Neo Geo, remember that?), is famous for its fast, frantic, anime-inspired action, rescuing POWs with over the top animations, and having more explosions than a Michael Bay movie. Oh, and it’s famous for being rock hard.

Metal Slug 7, out this week on the Nintendo DS, retains all of those hallmarks. It’s got six commandos to pick from, each with their own strengths and weaknesses. It’s got seven levels, each one harder than the last and with a screen-filling boss to struggle against at the end. It’s got three difficulties – beginner, normal and hard (although they would be better described as hard, too hard and impossible). And, as if to scream: “this is a classic hardcore 2D shooter and we don’t care!”, you can’t play Metal Slug 7 with the stylus. It’s d-pad and buttons only.

The R button changes your weapon – when you rescue a POW, he will usually give you a weapon of some description – a rocket launcher, perhaps, a laser gun, a shotgun or the Zantetsu sword, which can wipe out enemy fire. The A button lobs a grenade – great for destroying heavily armoured vehicles and structures. Then you’ve got a special melee attack, triggered by pressing L and Y at the same time. This allows you to kill enemies in one hit without having to stand next to them, as you have to with the regular knife attack. Some characters have special actions, too (up on the d-pad). Marco, for example, has Salvo, a volley of shots from a fixed position. Tarma, who likes building custom motorcycles, can do a Slug Kick, which recovers his endurance (life). And Ralf, an expert in close combat, can do a Vulcan punch, which is powerful enough to destroy enemy tanks.

Each character has his or own set of strengths and weaknesses. Marco is great with the handgun. Eri has loads of hand grenades, Fio’s got a heavy machine gun as her default weapon, Ralf can attack at double speed in melee and Clark can throw enemies. You don’t have to spend ages working out which character is best for each mission, since they’re all capable in the right hands, but you’ll want to experiment with each to find out who fits best your play style.

Every so often you’ll climb aboard slugs, which are mech-style tanks that grant you increased armour and can decimate enemies with cannon fire (metal slug… see?). It’s in these death dealers that you feel as close as you’re going to get to being in God mode. There are six in total, ranging from the all-purpose Metal Slug, from which the game is titled, to the huge Slug Gigant (making its series debut), taking in the Slug Flyer and bipedal Slugnoid along the way. Eventually, though, the masses of enemy soldiers, tanks and structures will run down the slug’s endurance and it will explode, forcing you to return to the desperate fight for your life that is Metal Slug.

This, though, is exactly what fans like about the series. They like the fact that it’s a hardcore 2D shooter for hardcore 2D shooter fans. This is their series, and any compromise, any pandering to casual gamers, will be seen not only as an insult, but blasphemy. Don’t buy Metal Slug 7 if you fancy an easy-going shooter experience. Buy Metal Slug 7 if you enjoy the odd bout of masochism.

This is not to say the game isn’t fun. Like last year’s release of Capcom’s brutally difficult Mega Man 9, Metal Slug 7 can be wonderfully satisfying. The sense of achievement you get when you’ve completed one of the later levels, even on the medium difficulty, is immense. You don’t realise it until it’s over because your brain has been held in a vice-like grip of concentration, but when you do it’s a great feeling. Metal Slug 7, when you can cope with it, makes you feel like you’re some kind of gaming God.

For hardcore fans, Metal Slug is not about desperately trying to stay alive, but about racking up as many points as possible. The rush blaster system, then, fuels that motivation. Here, by carrying out repeated attacks within a set period of time, you can push the rush blaster meter up and increase your potential score. You double it at first, then quadruple it, then it’s eight times points and then, finally, when the meter’s full it’ll flash white, giving you a 16x multiplier. Unfortunately, though, you’re only competing with yourself. The complete lack of online leaderboards eradicates any competitive edge the game might have had.

If you find yourself somehow done with the campaign (you might be good enough to complete it, or you just give up), the hilarious Combat School mode should keep you busy. Here you’re set a number of training sessions by a quintessentially female anime drill instructor called Cynthia. In a nod to the countless Japanese dating sims that never see the light of day in the west, you’re able to talk to Cynthia, even flirt with her, asking her all types of questions that provoke wonderfully coy responses. This is nothing but a pointless diversion, but it proves a highlight nonetheless (“No thanks. I don’t think I’d enjoy listening to you sing”, “I’ve got no plans for my next day off. You’ve got none either, you say? Quite right, too!” and “Hm? Am I seeing someone? Hmmm. What are you trying to say, Mr. Recruit? If you’ve got time to think about things like that, then you’re obviously not working hard enough at your training.”). The idea is that you move up in rank, eventually ending up as the general of the army. Why bother? Well, who knows what Cynthia will do when you’re running the show.

Essentially, Metal Slug 7 is one for the fans, designed with an “if it ain’t broke don’t fix it” mentality. There’s nothing here that revolutionises the series, indeed there’s nothing here that looks remotely modern. Some might even say it’s a step back, given the disappointing lack of a co-op mode (a long-running series feature), and no online leaderboards means there’s little replay value. Still, Metal Slug 7 provides its army of die-hard fans with seven new levels to battle through and new slugs to enjoy. It might be too hard for most, but it’s just about right for those who care.

Metal Slug 7 provides its army of die-hard fans with seven new levels to battle through and new slugs to enjoy. It might be too hard for most, but it's just about right for those who care.
7 Classic Metal Slug graphics Classic Metal Slug gameplay No co-op or online leaderboards No replay value

Join Marco, Fio, Tarma, Eri, along with Ralf and Clark and get…

Join Marco, Fio, Tarma, Eri, along with Ralf and Clark and get…