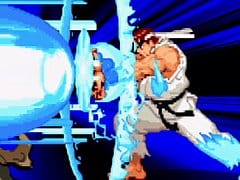 2009 may well go down as the year fighting games fought back. In February Capcom unleashed Street Fighter IV, a game many have said has almost single-handedly rekindled long lost love for quarter circle forward motions inside the hearts of lapsed fighting game fans the world over. On its own, that would be enough.

There’s another fighting game many a fan played “back in the day”. A game that demands silly numbers on eBay. A game that, even if you’re not that good, can make you feel that you are. A game that, when all is said and done, some people, hush hush, reckon is the best of them all.

The game is Marvel vs. Capcom 2: New Age of Heroes, released today on XBLA for 1200MS Points (it’ll be out on PSN August 13, priced at an expensive £11.99). Despite being first released in arcades, if you played the chaotic fighter “back in the day”, chances are you played it on the SEGA Dreamcast nine years ago. It was one of the most fun reasons to own SEGA’s ill-fated console – the spectacular, three-on-three tag fighting, spiralling combos and forgiving fighting system meant you didn’t have to be Daigo “The Beast” Umehara to make those lovely sprites dance. You just had to mash buttons. Quickly.

Now it’s back, it’s a digital download and it still kicks ass. Based on the Dreamcast version, the XBLA and PSN port includes everything from the original, including all 56 characters (all unlocked from the get-go), two new character graphics modes – crisp and smooth – widescreen support and, wait for it… online play.

This is the biggie. This is the reason to shell out the MS Points or the, er, real money, even if you’ve already got the game gathering dust in a closet somewhere. For the first time ever you’ll be able to pit your skills against other players around the world without having to lug your arcade stick over to some tournament somewhere miles away. Stuff like this, people, is what God made the internet for.

You might be thinking, er, what’s Marvel vs. Capcom 2 about? What happened to Marvel vs. Capcom 1? And how, exactly, am I going to adjust to this game given I’m only just starting to get to grips with Street Fighter IV? All valid questions. Here are the answers.

What’s Marvel vs. Capcom 2 about then? It’s perhaps the most popular game in Capcom’s VS series, a series that enjoyed the height of its popularity back in the late 90s. It’s a 2D fighting game with a humongous playable character roster made up of guys, girls and things from Capcom’s classic games and Marvel’s back catalogue of super heroes. So, on the Capcom side you’ve got Ryu and Chun-Li from Street Fighter, Jill Valentine from Resident Evil, Mega Man from Mega Man, and Anakaris and Felicia from Darkstalkers, among others.

On the Marvel side of things you’ve got various X-Men, including Wolverine (times two, one with bone claws, the other with adamantium claws) and Cyclops, Iron Man, Hulk, Magneto and Doctor Doom, among others. You pick three characters – when the life bar of one is up, you automatically switch to another. The player who reduces all three life bars of his or her opponent first wins. Simples, as Aleksandr from comparethemeerkat.com would put it.

Simples is apt, because the thing that made MvC2 popular when it was first released was its accessible fighting game system, and it’s just as accessible today. As in Street Fighter IV it uses six buttons, but only four do basic attacks – light punch, hard punch, light kick and hard kick. The remaining two buttons are used for “Assists” – one brings in one partner for a helpful single attack, the other does the same for your other partner.

MvC2’s combos are built using an easy to grasp, and often forgiving, link system. So, you’re able to tap light punch twice then hard punch for an easy three hit combo with just about any character in the game. Key to getting better at MvC2, however, is the launcher system. By pressing down or down forward and hard punch or hard kick, you’re able to launch your opponent into the air. If you press up immediately afterwards you’re able to jump up in hot pursuit and perform an air combo, dealing additional damage before they’ve even hit the ground. The launcher can usually be strung onto the end of basic combos, like the one described above. So you can see that big combos aren’t going to be beyond most players.

Layered on top of this is the Super Combo system, similar to Street Fighter IV’s Ultra Combo system. Your three-person team shares a single super meter, which fills, as you take and deal damage, up to a maximum of five levels. By doing one simple motion and pressing both punch buttons or both kicks, the screen will freeze for a split second and you’ll unleash a… you guessed it, Super Combo. Every character has at least one, some as many as three. Ryu, for example, has a massive Hadouken that hits his opponent multiple times. X-Man Gambit explodes in a flurry of kinetically-charged playing cards. Every character’s Ultra Combo is different, but they’re all huge fun.

Now here’s where things get interesting. If you’ve got enough Super Combo levels filled you’re able to combine all three of your characters’ Super Combos into one super, duper mega madness (not the official name) combo. All you need to do is the motion for the on-screen character, then, before the animation’s run its course, perform the motion for a partner’s Super Combo. This brings your partner out who automatically starts their Super. Then, before that’s finished, do it again, and your third and final character will finish it off. This, my fighting game fan friends, is what MvC2 is all about.

Put simply, it’s a fast, frenetic, at times bonkers brawler. An absolutely insane amount of stuff can happen on screen, to the point where you often find it hard to keep track of who’s hitting who and from what direction. It’s never boring though – the kind of feel, pace and strategy involved is almost in direct opposition to Street Fighter IV’s more considered, slower play, which is no bad thing. In fact it’s just as great, for some even better, but for different reasons.

What’s new for the hardcore? Well, the two new character graphic modes on offer – crisp and smooth – are welcome, but this is not in any way a HD Remix. It probably wasn’t needed anyway – the graphics always were excellent. The backgrounds in particular, all 3D, are vibrant, eye catching and colourful, and look great on high resolution TVs. Apparently the original textures and assets from the Dreamcast version were much higher quality than the Dreamcast could display at the time. It shows.

For purists, those who’ll no doubt turn their noses up at all this HD nonsense, you can use the “Classic” setting, which leaves the sprites completely unfiltered, and turns the ratio to 4:3 (the widescreen support is excellent – it doesn’t touch the play area, and doesn’t zoom and crop like HD Remix did). This gives an almost identical look to the Dreamcast version – the version still used in fighting game tournaments around the world.

Most important of all, of course, is the addition of online. With the game developed by Backbone, the same studio behind the excellent Super Street Fighter II Turbo, it comes as no surprise to find the net code is solid and works well, with similar menu options and support. The excellent player match quarter mode/lobby system from HD Remix returns (why wasn’t it in SFIV?), which is great. There are leaderboards, too. Capcom’s called it “the best fighting game net code ever created for consoles”. We’re inclined to agree.

When all is said and done, if you’re a fighting game fan MvC2 is an essential purchase. It won’t be for everybody – it’s at times bewildering, even though button mashing and repeated quarter circle forward motions often result in spectacular combos. Underneath, one hell of a fighting game system is there for those of you who wish to unravel it – the game wouldn’t still be played by the pros on the tournament circuit if it didn’t require genuine skill to master. But really, the big draw is online play. That and the prospect of a trip down a Dreamcast-coloured memory lane.