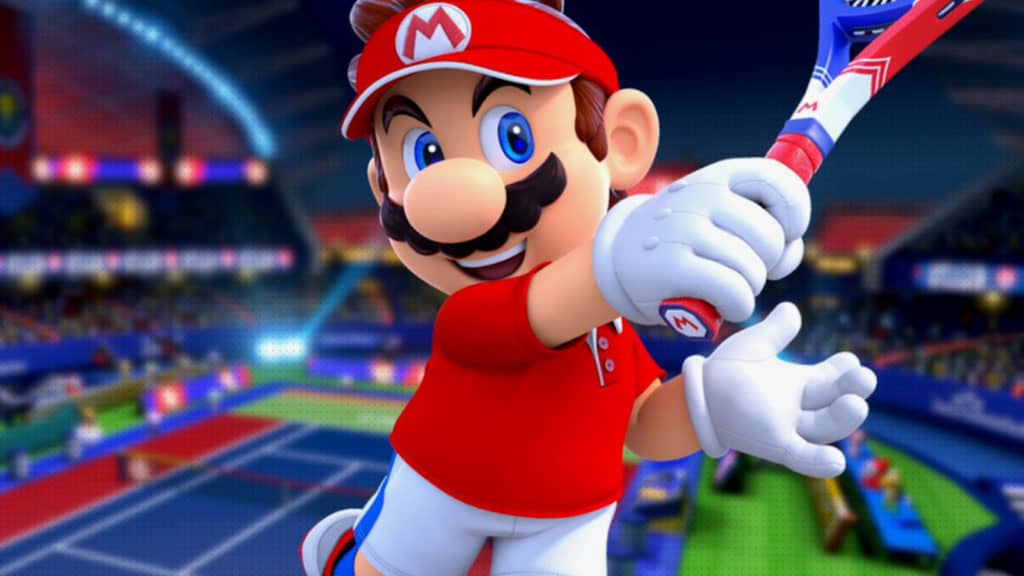 Andy Murray and Steffi Graf are just finishing off their opponents. They’re against Tim Henman and Sue Barker off Question of Sport in the mixed doubles finals at Wimbledon, and suddenly The King of England Cliff Richard stands up and starts singing. A huge tornado appears from the pipes of England’s greatest singer, trapping Murray’s younger brother Jamie Murray with the tape from Sir Cliff’s ceremonial racket that he brings to every grass tournament final, along with his special bible filled with English strawberries and English cream.

It’s a realistic sounding situation, I’m sure you’ll agree, and the exact same one that Mario and pals find themselves in when Wario and Waluigi turn up with, if I’m honest, basically the infinity gauntlet from The Avengers, but in tennis racket form. Never let it be said Nintendo won’t embrace the crazy from time to time.

For those confused, this isn’t a re-release of the Wii U game from 2015: it’s a brand new title. Adventure Mode has an old-school top down map with mission nodes on it, a-la Super Mario Bros. 3. It’s tutorial-heavy and slow to begin. It’s moments like these where Nintendo’s “it’s for everyone” mindset lets the game down, because if you’re picking up a tennis game, there’s a high chance you know what tennis is, and how it works – even if it’s a loose grip of the sport. 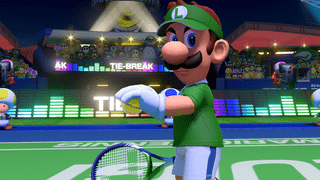 That said, it’s either occasionally whip-smart, or unintentionally funny as it teaches you the ropes. Donkey Kong won’t let you pass him until you’re strong enough, and the first mission sees Dry Bones guarding a temple that holds the dark secrets of the infinity racket, but he reckons if you can take him on the court by winning a simple game, you’re probably an alright lad and can pass. That humour pervades the experience: characters challenge you to get a high number in a rally only to repeatedly do Zone Shots at you, or aim for the corners. I don’t think they understand what a rally actually is.

Aside beating opponents, there are mini-games which help you understand the ins-and-outs of Nintendo’s particular brand of tennis, and there’s a lot to learn. The standard fare will get you by (lob, slice, topspin, flat, drop shot), but you’ve also got the ability to slow time down with zone speed, or do a zone shot which pulls the camera into first person mode and lets you aim with the motion controls for pinpoint accuracy, or just to smash your opponent’s racket.

And this is where we talk about fighting games and parrying. That powerful shot you can aim can be blocked, but it’s a timing thing – essentially a fighting game parry. Miss it, and you will take damage; three times and you have no racket to hit back with, thus you lose. But time it right and you’re back on the front foot. It’s madness, but it works. And it adds tremendous depth to what would otherwise be a simplistic arcade tennis game. 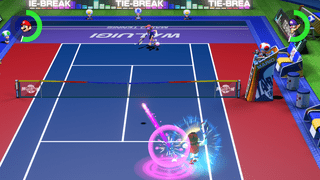 As well as that, if you commit to a shot early you can fill up your energy bar to make these more interesting shots: risk/reward. Flick the right stick in any direction to do your character’s trick shot, reaching shots that’d be otherwise impossible to hit. Again, though, get it wrong and you’ll lose energy, instead of gaining it. As if that weren’t enough, you will even level Mario up to increase his stats.

The problem, then, is that the difficulty is absolute bullshit. You will breeze through some matches and mini-games, but you’ll find a mid-point of Adventure Mode that’ll make you want to snap your Switch in half. For me it was Blooper. Now, this particular match takes place on a boat with a tennis court on the deck, and the mast is in the middle the net. This match took me an unholy amount of attempts to win, and I tried everything at my disposal until I decided the only way forward was to smash Blooper’s racket: his speed, precision, and power were things I couldn’t match, so I just had to stay in the games long enough to build meter, and aim to his side with Zone Shots to break him racket multiple times.

See, it’s not that it’s difficult, per say. I had done every other mission available to me, even had to grind up a few levels to see if that made a difference (hint: it didn’t). No, it’s the rubberbanding that’d you see in a racing game, that makes this so bad. You could get into the zone and go 30-0 up, only for Blooper to hit the mast three times and bounce the ball where you can’t possibly be, or predict it’d go. Once? Sure, lucky shot. Twice? Okay, what’s going on? Three times is cheating. To those of you shouting ‘but you can do the same, surely?,’ yes, you can, but I saw Blooper stay perfectly still in a situation where it’s clear anyone would hit the ball diagonally across the court to where he wasn’t, only for it to hit the mast and bounce perfectly where he was waiting for it. That’s not a fun thing to experience for anyone. 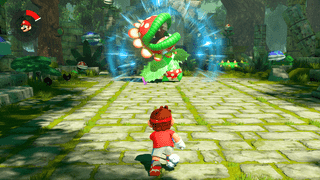 The mini-games eventually repeat themselves, just moving through beginner, intermediate, and advanced, and they’ll give you rackets that are more powerful, and thus allow you to have more broken during a match to extend how long you can survive. Boss battles are easy enough, but the addition of a timer for every fight is draining purely because once you’ve failed once, you understand how to win the rematch: it’s all about patterns and watching animations, which is why the timer is so egregious. Make me watch animations in a timed event, sure.

Speaking of rematch, a quick restart option is something the single player sorely needs. Watching dialogue after every loss only to be able to skip the intro chat, but not the failure chat, is painful. These little quality of life improvements would make the game a better one overall.

One of my biggest concerns, though, is the racket breaking mechanic. Towards the end of the story mode it becomes apparent that winning matches playing tennis is nigh-on impossible, and the better way is to build meter and smash their rackets repeatedly until they’ve none left. The issue is that, online, unless you’re playing the “simple” mode (classic tennis, basically), it’s going to come down to who is the best at parrying the powerful shots, to then return with racket breakers. 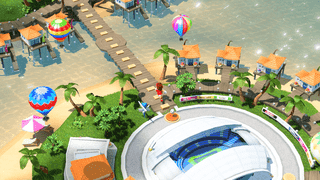 Remove all the Mario from the game via the Simple Mode, which pulls out the special moves and stops you being able to destroy rackets, and this is a fundamentally enjoyable tennis game that lets you test your mettle against people online or off. Trying to find the corners or get full power on a shot is rewarding, and despite the colour and bombast of the Adventure Mode, it is here I think most will end up coming back to. It’s worth mentioning, too, that playing with friends locally is always a blast, whether you’re huddled round the Switch’s small screen, or a 65 inch OLED.

Mario Tennis Aces is a lot of fun away from that Adventure Mode because the mechanics are deep enough to offer a game with longevity in multiplayer. Nintendo has listened here, and made a better game than last time, but the difficulty in that single player mode really does sour things. Still, it’s a good game, regardless, and Sir Cliff would be proud, God rest his soul.

Mario Tennis Aces is a good tennis game let down by an Adventure Mode that often feels as though it's cheating you.
7 The tennis is ace(s) Plenty of variety Adventure mode will have you fuming