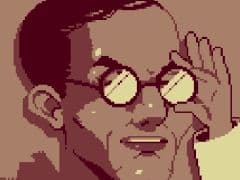 It’s never explicitly stated, but Luftrausers seemingly drapes the player with the uniforms of a truly dark force. There is little doubting it, in fact: yours is the task of fighting the fight of a malevolent military force that, at the very least, shares a tailor with the Nazis.

Seating the player in a cockpit of evil intent is a peculiar quirk of classic shmup design, seen in seminal releases like Under Defeat. The genre often toys with the morality of war – a devotion that parallels Hideo Kojima’s musings in the Metal Gear series.

Beyond aesthetic trappings, however, Luftrausers is quite distinct from such traditional works. It may be a 2D aeronautical game borne from the genre’s heritage – particularly where its crisp pixelated visuals and crunchy audio is concerned – but Vlambeer’s creation boldly contradicts conventions set by the heavyweight shmups.

Fundamentally a survival-focused arena shooter, it apes the controls of that gaming icon, Asteroids. Boosting builds speed, momentum gives the looping play-field a tangible quality, and rotating allows for acrobatic duelling. Gravity is also simulated, the physics of which initially furnish Luftrausers with a flabby, erratic feel. Then you learn to play it differently.

Because Luftrausers’ fighter craft control differently; they are at once graceful gliders, curious hovering contraptions, and thuggish projectiles. The controls are responsive, but the ship behaviour makes for a loose, wild game with little of the precision typical of arcade shooters.

Meanwhile the scoring uses a simple combo multiplier. Keep downing enemies and the point multiplier climbs. Hold back on firing, and health regenerates, but the combo resets. It’s a brilliantly simple risk-versus-reward scoring system, somewhat undermined by the sporadic appearance of foes. All too unpredictably the skies fall silent, making combo maintenance inconsistent, introducing a shade too much luck for serious score chasing.

Instead, Luftrausers, which started life as a Flash game, includes numerous goals that encourage exploring an impressive variety of available ship customisations. Vlambeer has crafted a game that looks superb, sounds better still and is terrifically entertaining. But in a genre resplendent with elegantly refined scoring systems and mechanics, Luftrausers lands a little short of brilliance.

Luftrausers is an arcade shooter with over 100 missions.

Luftrausers is an arcade shooter with over 100 missions.