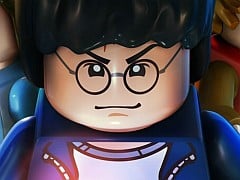 In the interests of saving everyone some time, I’d like you to answer the following questions as honestly as possible. Believe me, it’s better for us all this way:

1. Does the idea of playing a Harry Potter video game for literally hours on end sound unappealing to you?

2. Do you think that, in spite of the fact they’re enjoyable, the LEGO series of games has been getting away with a lot, and the fact they’re inherently cute isn’t a good enough excuse for essentially putting out the same game since LEGO Star Wars?

If the answer to either or both of those questions is yes, then thank you very much for your time and don’t let the door hit your curmudgeonly backside on the way out. You may as well move on, as there’s nothing here to change your opinion. As for the rest of you, it’s away to Hogwarts we go!

There’s something I find comfortingly familiar about TT’s LEGO series. Each new license the franchise tackles has resulted in a game – or games – with a core experience that hasn’t really deviated from a set template over the past six years. Players still move cute little figurines around different environments, smashing things up, collecting studs, platforming, solving the occasional puzzle and fighting the odd battle.

But, for all of its repetition, there has never been a LEGO game released (since TT started making them, anyway) that could ever be described as boring. The British developer always adds just enough new features to make each experience feel fresh. It also assembles every game with a love and understanding of the license it’s tied to that is evident in every pixel and frame.

LEGO Harry Potter: Years 5-7 is no different in this regard, and it’s also easily the best game tied to a Warner Bros. film franchise since… well, since the last time TT made a LEGO Harry Potter game. Players take control of the bespectacled wizard and his Hogwarts pals (along with some of the nastier characters around him) and work their way through the latter three entries in Potter canon; the Order of the Phoenix, the Half-Blood Prince and the Deathly Hallows.

As with the books and films, LEGO Harry Potter: Years 5-7 is far darker in tone than what’s gone before it, although the good humour of the LEGO series takes a little of the edge off the proceedings. Not too much, mind, and it’s a testament to TT’s extensive knowledge of the source material that it manages to absolutely nail the different characters in terms of their individual personalities with just a couple of noises and gestures.

The mean-looking smirk that’s plastered over the face of Delores Umbridge, along with her smug self-satisfied squeaks, made her every bit as loathsome in the game to me as she’s ever been. Snape’s haughty disdain is captured in a handful of gestures and harrumphs and, most impressively, You Know Who’s sheer menace is evident in the malevolent glee blazing in his eyes. Hats off to TT; this game is the first instance in my life where a LEGO figurine caused a chill to prickle the back of my neck.

Like last year’s game, LEGO Harry Potter: Years 5-7 makes Hogwarts into a central hub and players trundle between missions following Nearly-Headless Nick. There’s a ton of things to do between missions, most of which involves collecting studs through platforming, casting spells on the environment and rescuing the odd student in peril. A lot of the spells from the first game also return, as does the slightly unintuitive way of flipping between them – the spell menu is brought up with the same button the player uses to flip between characters.

To be honest, there’s a lot here that players will have seen in the first LEGO game, but TT have added new content and features to keep the player’s appetite for exploration whetted. The Hogwarts hub has been slightly spruced up and filled with new items and knick-knacks for the player to interact with – including the odd puzzle that can only be solved by characters who are Parsel Tongues. In the latter half of the game, players will leave Hogwarts for woodlands, other abodes such as Sirius Black’s house, or the odd flashback and dream sequence. A new quick-fire control has been also been added, which allows players to spam attacks.

The game supports drop-in/drop-out co-op play and once again, the screen splits if the players wander too far away from each other. Playing in co-op, it becomes easy to see that a lot of the puzzling and platforming was designed with two players in mind. However, the game’s AI is decent enough not to get in the way or hold things up for players who want to go it alone. There’s also a ton of replayability loaded into the game. LEGO Harry Potter: Years 5-7 is simply huge in size, bursting with collectibles and unlockable content, and on the player’s first runthrough they’ll notice content that can only be opened by characters they have yet to find. TT has given the player every reason to explore its magical world initially and stuffed it with enough content to inspire repeat visits.

LEGO Harry Potter: Years 5-7 may strike players familiar with the LEGO series as a bit samey to begin with – especially anyone who played Years 1-4. But thanks to the strength of its stories, its fat pack of content and its irresistible charm, even those initially resistant to the prospect of another three terms at Hogwarts are likely to be won over. TT has produced yet another fantastic movie tie-in video game and I am a little stumped about which film or literary license the developer could turn its talents to next. I have to confess, though, I’m looking forward to seeing the result.

Thanks to the strength of its stories, its fat pack of content and its irresistible charm, even those initially resistant to the prospect of another three terms at Hogwarts are likely to be won over.
8 Adorably cute Ton of replayability Best storylines in the canon Could have done with a few more new features

The follow-up to the hit game LEGO Harry Potter: Years 1-4.

The follow-up to the hit game LEGO Harry Potter: Years 1-4.