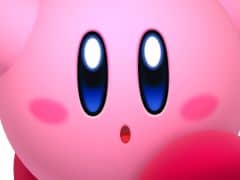 Kirby: Triple Deluxe isn’t going to be the type of game that people go crazy over like, say… Super Mario 3D World, but nor is it a big old snoozy disappointment like Yoshi’s New Island.

‘Triple Deluxe’ is a bit of a misnomer, though. That indicates that you’ve got three full games to play here, which isn’t really the case. You’ve got one full platformer, a fun but limited fighting mode and a rhythm action type with King Dedede bouncing along. Of the three, the latter is the weakest. You’ve got to time your jumps in order to get him to collect coins. It’s not all that engaging, can be frustrating, and overall it’s hard to know why Nintendo thought it warranted its own mode: it would have been fine as simply a between level bonus collect-em-up (it’s got classic Kirby tunes though, if that’s your bag).

The fighting game’s diverting enough, if you want to see Kirby cosplaying as Link and slicing other kirbies up in Smash Brothers-style melees. But the platformer is what you pay for. It’s not as visually appealing as a Kirby’s Epic Yarn, and it’s hard not to belch forth an audible sigh at the fact it’s ‘yet another’ Nintendo platformer (that’s about four of them in the last four months), but Kirby’s Triple Deluxe has enough going for it to dissipate any initial ennui.

The adorable spherical oik consumes, maims and crushes his way through a bunch of cutesy islands, sucking his enemies up and taking on their traits like a cuddly xenomorph. Where Kirby Triple Deluxe messes around with things a touch is the way you can flit between two planes with the use of warp stars, conveniently bringing in the 3DS’ 3D effect, so he can go rampaging in the foreground or background. It brings in a bit of replayability as you look for extras, like keychains and level unlocks.