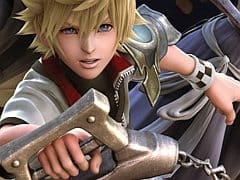 After nearly ten years, it still boggles my mind that the Kingdom Hearts series actually exists; that Mickey Mouse wields a keyblade, Hercules is the master of a battle coliseum and Sephiroth can exchange blows with Donald the Duck. It’s the kind of game that might be conjured up in a weird alcohol fuelled dream, a dream that seems perfectly plausible while you’re in it, but after waking you realise how utterly absurd it all was. It’s very real though, and there’s a very real army of fans still clamouring for the third game in the series. While spin-off games such as Coded and 358/2 Days have attempted to fill the void, they’re certainly no replacement for the PS3 sequel we’ve all been anxiously waiting for.

Upon hearing about Kingdom Hearts: Birth by Sleep, I was distressed to discover that this too would find itself in that strange stop-gap limbo. Set ten years before the events of the original game, we find ourselves following the exploits of Ventus, Aqua and Terra; three wannabe keyblade-wielders who were first introduced in Kingdom Hearts 2. After learning of their plight to track down the missing Master Xenahort and spending some time acclimatising to the battle system, however, it seemed that my stop gap depiction was wholly unjustified. Birth by Sleep could easily be considered an entry in the main canon; its narrative is fundamental to the plot as a whole, there are some excellent additions to combat, and boy oh boy is it good looking. This is the full-on Kingdom Hearts experience streamlined for a handheld console.

This streamlining is mostly achieved through a re-jigged structure. Birth by Sleep funnels the action down three paths, one for each of our three heroes. After a lengthy intro, players are presented with a choice of which character they’d like to continue the game with. Terra is the strong but slow warrior, Aqua the agile but physically weak mage, and Ventus finds himself loitering somewhere between the two. Each character’s path is largely the same, and they’ll visit the same places in pretty much the same order regardless of your choice. The characters they’ll encounter and quests they’ll undertake are different, however, and playing through each of the three storylines is the only way to fully understand what’s going on.

The first three worlds draw from three of Disney’s most iconic princesses: Snow White, Cinderella and Sleeping Beauty. Within these worlds you’ll play hide and seek with dwarves, collect materials for Cinderella’s dress and try to rouse the lazy Sleeping Beauty from her mammoth sleepathon. Later on you’ll explore Deep Space from Lilo and Stitch and return to the ever enchanting Neverland. Each world is beautifully realised, with the combined efforts of Tetsuya Nomura and Walt Disney creating a cast of incredibly well designed characters.

The game leads you through each world at quite a pace, relentlessly pushing you forward in your quest to find Xehanort. Consequently, there’s not much room for exploration, but this is never much of an issue given the handheld nature of the game. What the game lacks in expedition and discovery it makes up for in combat and progression. The battle system is a glorious blend of all the Kingdom Hearts that have come before it, refined with the addition of several new mechanics. If you’re thinking you can mindlessly hammer away on the X button and expect to get anywhere, think again. It takes timing, skill and an in-depth knowledge of each mechanic to get anywhere. Ignore any of these principles and you’ll be staring at the Game Over screen quicker than you can say bibbidi-bobbidi-boo.

The first thing you’ll need to get your head around is the Command Deck system. In many ways, this is just like the immortal materia system from Final Fantasy VII; you equip an ability (known as a command) and the more you use it, the more powerful it will become. Your deck is simply the selection of commands at your disposal, and can be edited as you wish. Commands can be found in chests and bought from shops along the way, and if you find one you’re particularly fond of, you can swap it into your deck. Improving and editing your deck is surprisingly addictive, and you’ll find yourself spending more and more time in the menus as the game progresses.

Another interesting addition to combat is the brand spanking new D-Link system. After becoming acquainted with certain characters in the game (which in Snow White’s case, for example, involves saving her ass from man-eating trees), your hero is able to form a link with them in combat. This enables your hero to use the abilities dictated by that character’s command deck. So, if your character doesn’t happen to know any healing spells, you can use D-Link to use the abilities of a character that does. Pretty handy I think you’ll agree.

By stringing together attacks of the right nature, you can also change your combat style. Throw a fire spell into the mix at the right time, for example, and you might activate the FireStorm style, which imbues your blade with that particular element. Experimenting with different command decks and working out which abilities provoke which command styles always manages to keep combat feeling fresh. In conjunction with D-Link and the option to combine two commands to create combination attacks, Birth by Sleep has one of the deepest real-time battle systems around.

Combat is great then, but it’s hard to remain quite so complimentary about the narrative. While the story might make sense to those who’ve graduated with an A at Kingdom Hearts College, everybody else might find the plot slightly overwhelming. Just like Kingdom Hearts 2, it’s somewhat convoluted, which I’ve always found quite jarring alongside the simplicity of the Disney plots. It’s still digestible, though, and on the whole the voice acting is very good. The vocal talents of a certain Leonard Nimoy (Xehanort) are sure to delight many, and some of the original Disney actors have been brought in to really bring their characters to life.

It’s been a good year for the PSP, especially for quirky RPG affairs such as this. I was ready to dismiss Birth by Sleep as being just another spin-off; a quick cash in on the Kingdom Hearts name, but I’m happy to have been proved wrong. In many ways, it actually outshines its console counterparts. Bar a few niggling control issues, the battle system could well be the best in the series yet, and at times I actually felt it looked better than its PS2 cousins. For those still enduring the long and painful road to KH3, Birth by Sleep is a fantastic stop along the way.

At times it looks better than its PS2 cousins and for those still enduring the long and painful road to KH3, Birth by Sleep is a fantastic stop along the way.
8 A solid 30 hours of gameplay Perhaps the best battle system yet Looks gorgeous on the PSP screen Plot still feels convoluted