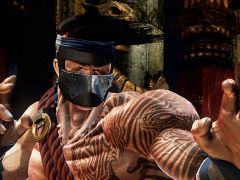 Loitering temptingly in the Xbox One’s store, Killer Instinct’s freemium model at first appears to be a good deal. Look closer, however, and you’ll see a game hamstrung by obvious design failings and a microtransaction system, both conspiring to keep a good fighter down.

Its initial setup is solid, as Killer Instinct can take on many roles to satisfy players of varying skill levels. Button mashers and veteran joystick wigglers can unite in favour of a combo system that appears simplistic on first inspection, but turns out to offer a surprising amount of depth.

Unfortunately, the speed at which characters such as Jago are able to unleash attacks means even the most thoughtful of players will occasionally throw away competition-level control for a finger-based River Dance on the new controller.

While your body remains perfectly still, hyperactive hand movements continuously rehearse and execute an offensive routine that progresses through a chain opener attack, a handful of weak moves, and then a super. Mixing up your command pattern and distance produces varying results, while building the game’s Shadow and Instinct meters provide access to stronger variations of attack.

Multiplayer bouts are often topsy-turvy affairs. One player will reel off a decent combo until a lull in the action lets the battered fighter do the same to their opponent. Although you can reverse a chain of attacks by perfectly timing a Shadow move before your enemy’s next contact, the game’s restless speed makes consistent blocking a chore.

Online contests are randomly generated and don’t offer any kind of lobby play, a huge oversight considering the popularity of competitive fighters: something you’d think Microsoft would want to take advantage of through the Xbox One’s capture capabilities. Single-player is also limited to training with Jago or entering Survival mode, both of which quickly become tiresome.

Killer Instinct possesses the fundamentals to be a crowd-pleasing title, and certainly does a decent job of inviting less experienced players into the genre, but its limited modes and insistence on milking your funds KOs a game with potential.

The combat system has potential. Shame everything else is so poor.
5 An inviting beat 'em up at heart. Intuitive combo system for all types of player to enjoy. Unfinished and itching to steal your wallet. Lack of multiplayer options.