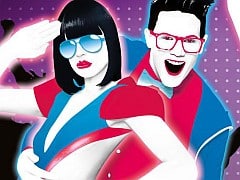 The impact Just Dance has had on our little industry is undeniably huge. Before Ubisoft saw the potential of that Wii Remote, dance games were confined to arcades, and only brought into the living room with the advent of those horrendous plastic mats. Just Dance blew things wide open, paving the way for countless others to follow. It made the genre relevant. It made the genre approachable. It made social gatherings from that point forward infinitely more embarrassing.

Relying on Kinect instead of a Wii Remote (at least in the case of the 360 version reviewed), Just Dance 3 handles significantly differently to before; it tracks your whole body. While you’ll still mimic what’s happening on screen, reacting to flash cards representing different movement-based motifs, the game is now able to grade your shape-throwing in a much broader sense.

It’s far from perfect, though. While the type of player traditionally attracted to the game – those who really put their all into each routine – probably won’t notice, it’s fair to say the game lacks subtlety. Play with one hand shoved in your pocket, for example, or without moving your feet, and you’ll still manage to scoop up ‘Perfect!’ scores. Conversely, when you think you’ve got the routine nailed down to a tee, there are still moves that aren’t registered at all.

Like its Wii Remote waggling predecessors, you can jump into Dance Off mode and beat people who are actually great dancers without putting in half as much effort. That’s not the point, I know, but it highlights the fact that we’re still a long way away from a dancing title that’s able to grade our actions properly. It’s another addition to a long line of games that suffers due to the limitations of Kinect. Even something as simple as choosing a track to play highlights this fact. The number of times I selected the wrong song as a result of Kinect’s quirks is frightening; menu navigation isn’t great, to say the least.

The track-list spans 51 tunes, covering an impressive range of genres, cultures and decades. Teeny boppers will appreciate the likes of The Black Eyed Peas (Pump It), Jesse J (Price Tag) and Rihanna (Only Girl). Your mum, on the other hand, might fancy some Mika (Lollipop), or Queen (Crazy Little Thing Called Love). And me? Well I’m partial to a bit of Lenny Kravitz (Are You Gonna Go My Way). There’s something for most tastes, although I’d still like to see a dance game attempt some ‘rockier’ routines.

Completing a track earns you Mojo points, which contribute to a rank, of sorts. Once you ‘rank up’, you’ll unlock special tracks which can be played from the Extras section of the main menu. The first you’ll unlock, for example, is a mash-up of Jamaican music. On a similar note, you can also earn Sweat Points if you choose to play with the game’s fitness options enabled – Just Sweat. Whilst a trivial feature for somebody like myself, this will undoubtedly prove successful with those looking to use the game as means of exercise. And lots of people will.

It’s funny, literally the morning before the game fell through our letterbox I was explaining to the rest of the office how much I disliked the Just Dance aesthetic – the psychedelic silhouettes and garish colour schemes. It looked a bit, well, naff, for lack of a better word. I take that back now. The animations, the vaguely humorous intros, the way the stage reacts to the lyrics and beat of the drums – I like it all. Perhaps it’s just what high definition visuals bring to the table, but there’s no denying it’s a good-looking game.

Highlights include The Chemical Brothers’ Hey Boy, Hey Girl, in which you’ll mimic a neon-tattooed Aztec tribesmen, with a kaleidoscopic background that pulses in time to the music. For the Sugar Hill Gang’s Apache (Jump on it), it’s a native American bopping about in front of speakers disguised as totem poles. In Gwen Stefani’s ‘What You Waiting For’, the choreography plays out in such a way that the dancer flips the screen from night to day, as if the routine was playing out in a spinning cube. Each routine flits between themes and colour palettes whilst retaining that very ‘Just Dance’ feel.

A special mention needs to go to Sentai Express’ Spectronizer, a peculiar – quite possibly Japanese – track, with a routine based around iconic Power Rangers moves. Yes, really. During the song, the four dancers ‘power up’, their bodies suddenly wrapped in futuristic and instantly familiar suits. It’s quite something, and genuinely a scream to play – so long as you’re with others who have equally low levels of dignity.

Annoyingly, not every song is multiplayer compatible – or more accurately, not every song is designed to be played with more than one person. The game will still track multiple dancers, but you’ll be performing the same actions. If you want to throw different shapes to your chums, you’ll have to choose the right track. Kurio Ko Uddah Le Jana by Bollywood Rainbow, is one such track; a two-player affair mimicking a Bollywood love scene. I did this one by myself, because I believe in self-love.

The four-player choreographies – like Spectronizer – are more impressive, making good use of both space and depth. Routines alternate between foreground and background, with dancers often directly interacting with one another, clapping hands or weaving in and out of each another. It’s well thought out, but – as I said – only available on certain songs.

Just Create is the most interesting addition to the main menu, allowing players to take advantage of Kinect’s camera to record their own choreographies. With a backing track of your choice, you can invent your own routines, adding your own moves and actions. What’s cool is that you can then save this, and get other people to play based on your choreography. The game will even score them accordingly. Even better, you can share these over Xbox LIVE, uploading them to JustDancePlanet.com.

But there’s a catch. Each time you choose to share a video, you’ll have to spend one Share Token. You only get five off the disc, meaning if you want to share more, you’re going to have to buy more tokens; you can see the pound signs sparkling in Ubisoft’s metaphorical eyes here. Adding new tracks via an integrated store I can understand, but buying the functionality to do what should be a core part of the package? Disappointing. It’ll probably make Ubisoft a thousand billion pounds though, so I’m sure they’re not too bothered.

As with the first two games, Just Dance 3 becomes far more enjoyable when you switch off the critical part of your brain. Sure, it’s not as responsive as it could be, options for multiplayer are lacking and the concept of Share Tokens are likely to enrage many players, but play it in the right circumstances, with the right company, and an appropriate assortment of alcoholic beverages to hand (or sweeties, for the whipper snappers) and Just Dance 3 is just as enjoyable as it’s ever been. The series has never taken itself too seriously, and if you assume the same frame of mind – something which is harder to do with Dance Central – it’s hard not to have a good time.

The series has never taken itself too seriously, and if you assume the same frame of mind - something which is harder to do with Dance Central - it's hard not to have a good time.
7 Recording choreographies is fun Well thought out routines Share tokens No multiplayer choreographies for all tracks

The third game in the multi-million selling Just Dance franchise.

The third game in the multi-million selling Just Dance franchise.