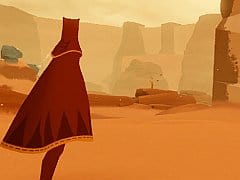 Wonder: that’s what we’ve been missing. This console generation has been defined by technological horsepower driving digital worlds of increasing verisimilitude. Yet these approximations of realism offer little but empty spectacle, sights that provoke admiration rather than astonishment. Our eyes widen at the latest tech demos and target renders, but rarely do they make our jaws drop and our synapses fire with genuine delight. That Journey – a downloadable release, no less, costing less than ten pounds – should regularly provide moments of genuine, dumbstruck awe is quite the achievement.

Such instances aren’t merely reserved for its beautiful setting, but this breathtaking world is a remarkable feat of engineering. At times you consider that Journey may have been delayed so as not to embarrass Naughty Dog: many said ten minutes wandering through the desert as Drake was a brave move, yet Journey proves this to be hollow hyperbole. For starters, its sand effects are significantly more convincing. Its billions of particles form a fluid surface, endlessly shifting, undulating, grains gently splashing up and out with every step you take. It shimmers gorgeously underneath the sun’s rays; later, it’s flecked with tiny bronze highlights, glistering faintly in the gloom.

Often you’ll be gazing at a yawning horizon, but elsewhere you’ll spend as much time looking up. Quite aside from the imposing light-emitting mountain that represents your final destination, you’ll frequently be dwarfed by ancient monumental constructions that lie in ruins. Sometimes your presence will awaken ancient mechanisms that whirr and clank into life, triggered by the strange musical noises that represent your only means of communication. You’re regularly made to feel very small indeed, even as you gradually come to realise how important your place in this strange, enticing world is.

Such is its allure that you begin to believe it’s the ideal game to show non-believers to convince them of the medium’s value. Trouble is, there are no other games quite like Journey, even if, in many ways, this is thatgamecompany’s most conventional release to date. That’s not to say all its ideas are unfamiliar: during one exhilarating sequence it evokes a trick-free SSX, while by introducing gentle puzzle elements to your curious probing of ancient ruins, it’s oddly redolent of Tomb Raider – or, indeed, Uncharted. On occasion it filters its exploration through stealth and survival horror tropes, while its narrative flow closely mirrors that of its predecessor, Flower. And in its bleak, windswept vistas, it owes a substantial debt to the works of Fumito Ueda. Mostly, it echoes the desolate solitude of Shadow of the Colossus. But it’s Ueda’s other game that casts a longer shadow.

Because Journey is two games in one. It is a single-player experience of unrivalled atmosphere, of thoughtful, considered pacing and contemplative, elliptical storytelling. But it is also a two-player game. When connected to the PlayStation Network, you may occasionally glimpse a fellow explorer, another lonely soul discovering the veiled secrets of this enigmatic world. You won’t know anything about them, other than the fact that they’re not on your friends’ list, the online setup ensuring you’ll only ever encounter strangers. Your initial response will likely be one of surprise, then apprehension. You might tentatively approach them. You might find they’d prefer to experience this particular journey – their journey – alone, as might you. You might, however, find that, like you, they’re seeking companionship; someone to help them make sense of their trek to that mysterious glowing light at the peak of the world.

And if Journey is mesmeric on your own, it’s a revelation with a partner. That early reticence to engage will dissolve as you realise that these vast expanses are much easier to traverse with two. A jab of the circle button from either player sends out a noise that sparks the other’s inner powers, and instead of trudging slowly across hilly dunes, you’ll glide over them. Arduous ascents become spectacular flights, each leap seeing the pair of you carried upwards in a magical dance created by your own interactions. At times your humanoid avatars feel more avian, your communication a delicate, intricate courtship of otherworldly sounds and graceful, almost balletic movements. In an arena dominated by conflict, it’s an astonishing achievement to imbue players with the desire to co-operate. And not just to co-operate, but to co-habit, to share this bizarre, beautiful experience. It’s no real exaggeration to say that, at times, it feels like the first flutterings of romance. Here, it is you and this other person against the perils and hardships of the world: you pull together to get through the bad times, you dance and sing in unison with joy at the good. Alone, you feel lost, fragile; together, you’re empowered. You may have experienced similar in the silent but unbreakable bond of friendship found in Ico. But never quite like this, never with another player.

Journey may be a wonderful visual storyteller, but it wouldn’t carry the same impact without its soundtrack. Austin Wintory’s magnificent score subtly shifts in tone, expertly conveying a sense of mystery, then playful curiosity, blissful freedom, even reverence. These are not melodies that will lodge in your brain, but emotive themes that amplify sensation. You will notice its absence on the occasions it fades to nothing, as efficiently sparse sound effects take over.

Whether it’s a pilgrimage worth making more than once or twice is debatable, the experience undeniably suffering a little under the scrutiny of a third or fourth play. Shorn of that initial wow factor, its spectacle remains remarkable but the mystery is lost. Those distant targets that expertly guide you on your first play become devious tricks to distract you from the aggressive linearity of the experience. Trek through the dunes alone, and your first journey will not be noticeably different from your last; winds blow you back on course should you stray too far from the intended path. This surprisingly rigid structure makes sense in light of the narrative, though it’s impossible to say why without venturing into spoiler territory. Further play brings its languid pace and simplistic mechanics into sharper focus: this is a game to embrace the heart and mind alike, but not the thumbs.

It’s perhaps telling that Journey suffers more on the rare occasions it most closely resembles a traditional game. Its glowing collectibles have a place in the game world, and implications for your avatar’s movements, but other intrusions are more problematic. Translucent controller overlays may be an efficient tutorial, but do we need one at all? Similarly, the basic ‘saving…’ text that appears between chapters shatters the atmosphere its developer takes such pains to build. And while Trophies are sensibly implemented, the notification chime is particularly jarring here – and it seems there’s still no way to avoid such interruptions.

That these problems are so irksome is something of an achievement in itself. Journey’s disappointments sting all the more, because here is an immaculately constructed, expertly choreographed experience that tells a story in a unique, intelligent way, exploring themes of faith and fate, death and rebirth with a rare delicacy of touch. That it comes at a time where risk is routinely avoided, sent out into a landscape clouded by doubt and dominated by the safe, the tried and tested? Maybe that’s the real wonder.

Journey is an immaculately constructed, expertly choreographed experience that tells a story in an intelligent way, exploring themes of faith and fate, death and rebirth with a rare delicacy of touch.
9 A singular vision, executed to near-perfection Looks and sounds like nothing else An unforgettable multiplayer experience Low replay value for offline players; surprisingly linear 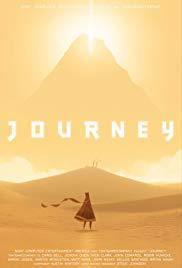 Awakening in an unknown world, the player walks, glides, and flies through…

Awakening in an unknown world, the player walks, glides, and flies through…