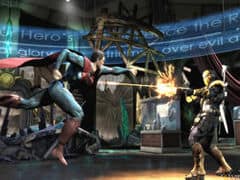 Injustice: Gods Among Us Review

Statements I never thought I’d write down #1: Injustice: Gods Among Us and BioShock Infinite start in exactly the same way. By that I don’t mean they both boast an intriguing, almost eerie boat ride or a lighthouse that was never intended for its original purpose. No, each starts with a quote that, no less, tries to spark your brain into imagining the possibilities of parallel dimensions. Unsurprisingly the similarities end there – although surely there’s an argument that pits vigors as Columbia’s super powers – but this theme of alternative universes is the very reason Injustice manages to both be horribly entertaining, and downright ridiculous.

It’s surely not possible to spoil the narrative of a fighting game, but on the off-chance you’re yearning for Injustice to play through its plot – and good grief, what are you doing? – avert your eyes now. NetherRealm, much as it did with Mortal Kombat vs. DC Universe, has decided the only way a group of comic book characters duking it out can truly make sense is to seriously abuse the idea of other dimensions. It gives them scope to pit Aquaman against, depressingly, Aquaman, and why Superman, of all people, takes on the role of the antagonist. Admittedly DC hasn’t exactly been innocent when it comes to screwing around with its roster, and it’s in a similar vein that Injustice comes off as laughably stupid rather than downright bad. A sensation of ‘what the hell am I doing?’ remaining a constant throughout its daft story mode.

That’s not why this exists, though. While Ed Boon and friends deserve some credit for actually trying to craft together a story of sorts, it comes down to the simple fact that most of us want to see Batman punch Lex Luther in the face while Superman lays waste to The Joker. It’s here where Gods Among Us has its most appeal, throwing a horrendous amount of fan service at its audience to the point where you just can’t help but warm to it, even if only a little. It’s obviously been designed by fans, for fans, and as horrible as a phrase such as that can be when it rolls out of a developer’s mouth, the evidence is readily apparent to justify such a sentiment. It’s why you’ll walk away with a smile on your face after playing it, and why you’ll forgive Injustice for looking like it was made for the PlayStation 2.

This would all be redundant if the core of Injustice wasn’t half-decent, and it holds up as much as anyone probably expects. NetherRealm showed with the rebooted Mortal Kombat that it has a somewhat interesting take on how to deliver a fighting experience without mercing off other games; that same ideology continues to run true. It’s effortlessly simple if you just want to enjoy the DC backdrop and, should you need it, there’s enough to construct a more in-depth experience filled with combos if that’s what you crave. It’ll never be [insert hardcore fighting game of choice here so I don’t offend you] but it doesn’t want to be either. Its biggest concern is ensuring you’re entertained.

That’s not to say what we have doesn’t run the risk of feeling flakey, however. Like any game of this ilk there’s a system to learn and the more familiar you become with it, the smoother animations and transitions start to become. Unfortunately, Injustice always seems to be trying to catch up with itself. Stringing together moves lacks the fluidity that the best of the genre execute with ease and there’s not really a lot of room to piece together your own style outside of what Injustice already has in its head. Everything has an odd, predetermined thread running through it.

NetherRealm counters this, though, by turning Gods Among Us’ stupid knob up. Far from being an insult, it means the environment becomes as useful as Batman’s fists. If we were to access the dream and find ourselves living in a world where superheroes actually existed, first and foremost we’d all be a lot happier. Second of all, if said heroes were to get into a fight, there’s simply no way their chosen location would remain intact. Sensibly then, the setting is just another way to both inflict pain or dodge an incoming attack, opening up the options the straightforward combos lack. I defy anyone not to feel an immense sense of pride after smashing The Green Lantern’s annoying face into the Bat-Signal before throwing him off a rooftop. It’s borderline ludicrous but it’s all the more fun for it. Injustice never takes itself too seriously.

As obvious as it sounds, you do need to be somewhat of a DC nut to get the most out of it – anyone saying they’re pumped to see Lobo against Shazam could possibly be a pathological liar – but it’s entertaining, an element far too many games forget to include. It’s slightly lightweight, sure, but Injustice will slap a grin on your face for a few days and then entice you back with the promise of idiotic multiplayer battles. In layman’s terms, it’s Mortal Kombat’s shell but with Batman. And everything’s better with Batman…

Campaign completed in 6 hours. Multiplayer tested for a few fights.

It's Mortal Kombat's shell but with Batman. And everything's better with Batman...
7 Batman It's fun Inconsistent fighting mechanic Green Lantern

Injustice: Gods Among Us

Injustice: Gods Among Us will introduce a story featuring a large cast…

Injustice: Gods Among Us

Injustice: Gods Among Us will introduce a story featuring a large cast…