I Am Alive Review - VideoGamer.com 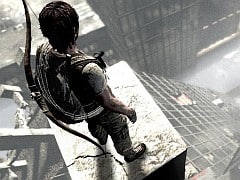 I Am Alive Review

Forget the shots of crumbled buildings and the menace of merciless raiders. Ubisoft’s I Am Alive was almost a disaster story in itself, with its lengthy development, plagued by difficulties, saved from its own apocalypse with a last-minute switch to digital. It’s all the better for it, too, as an affordable download is definitely the best form to showcase this intriguing but flawed experience.

Perhaps befitting the cataclysmic tone, this is a title that feels like a rickety train going too fast down dangerous tracks, falling to pieces the further it gets. Haverton, a fictional chunk of the USA, serves as the destroyed home for an entirely oppressive game. It’s an environment explicitly designed to be caustic, where an apocalyptic event – dubbed ambiguously as The Event – causes the world to go all belly up and forces the fractured pockets of humanity into a struggle for survival.

And struggle you will, as I Am Alive makes few concessions to its players. You will die, reload, and restart on a regular basis, especially if you’re ballsy enough to pick the game’s resource-challenged Survivor difficulty. This is a game that thrives by displaying the dour tones of its Game Over screen, and while that can be frustrating there’s always some satisfaction from your Ray Mearsian attempts at conquering these gruelling environments.

While it features many similar mechanics to that of Ubisoft’s other climbing-heavy titles, I Am Alive is the anathema to Assassin’s Creed. You struggle where Ezio Auditore could soar, which is challenging when much of the game is in calmbering, shuffling and shimmying across this broken wasteland, and if your rapidly depleting stamina bar runs out of juice you’ll likely plunge to a miserable demise. You can catch your breath mid-ascent by plonking down a climbing piton, but like everything in the game’s world these are few and far between. For the most part you’ll just be holding on for dear life and racing against the clock to reach the next available resting spot.

Plumes of thick sand obstruct much of your view of the outside, meaning for a large chunk of the time you can’t even see the grainy, desaturated aesthetic that makes up most of the game. This world of tumbledown concrete and twisted, splayed girders is clearly channelling the grim spirit of Cormac McCarthy’s The Road, as opposed to the more explosive postapocalyptia we’ve seen in recent months. Your first reaction is to hide, rather than beat your chest and rule the newfound wasteland, and in a medium rife with superheroes and highscores, Ubisoft’s attempt to make its player character feel weak, desperate and tested is an admirable goal.

There are overtones of survival horror running through the entire game, with the fog and the map in particular reminiscent of the original Silent Hill. The comparison is one of mechanics rather than content, however, and players are forced to scavenge the environment for a limited supply of items such as water bottles, food cans and first aid kits.

Combat is equally harsh, forcing you into tense showdowns where even pointing a gun at somebody is enough to reduce them to a wobbly mess. You start the game with a gun, but no bullets, and the game’s numerous stick-ups become dotted conflicts of attrition and strategy. Killing somebody with a gun generally yields you their bullet (despite being able to fire dozens of shots, enemies can only ever drop a single round of ammunition), meaning you always prioritise armed enemies. You can also kick your foes into environmental hazards (well, two – big drops and open fires) if they refuse to surrender.

I Am Alive’s combat mechanics are intriguing, but also primitive and distressingly repetitive. Ubisoft also doesn’t really know what do with its concluding chapters, and eventually settles on giving you a hunting bow (with recoverable arrows) and devaluing its sense of struggle by ramping up its focus on combat. At first the occasional combat can be a struggle, but after you kill fifty people in a couple of hours you become the same superhero badass from every other action adventure on the market.

I Am Alive fancies itself as a human take on the survival of humanity, rather than another drab shooter. With beady, dead eyes and an emotionless face, however, the unnamed protagonist doesn’t exactly ooze character from his dust-coated pores.

There’s a bizarre alien quality to much of the supporting cast, too, who repeat their same lines of awkwardly-delivered dialogue every single time you pass trigger lines on the map. These victims scatter themselves around the world, and are supposed to be helpless fellow survivors in need of rescue, yet they never feel like they’re anything more than lifeless game objects.

I Am Alive only really becomes a proper tale of human survival if you can look past the wonky mechanics and rough engine, if you can see past the rustic models and amateur dialogue, and if you can actually connect with the wailing cast of cardboard cut-outs. Ubisoft’s vision is clear and ambitious, but it lacks the development talent and budget to be effectively realised.

It’s not hard to knock I Am Alive, but despite the flaws it’s also an easy game to like. But while we should be glad this project wasn’t killed off in development hell, the sad truth is that I Am Alive never gets a chance to live.

Despite the flaws I Am Alive is an easy game to like. But while we should be glad this project wasn't killed off in development hell, the sad truth is that I Am Alive never gets a chance to live.
7 Intriguing combat mechanics It's good when it's a struggle Protagonist feels lifeless Becomes too generic towards the end