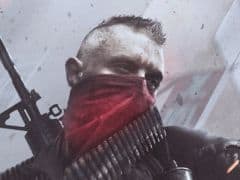 Homefront: The Revolution is the game that wouldn’t die, a survivor of failed publishers and near-total design changes, a sequel nobody wanted to a game not enough people bought. It could easily have limped out and been terrible, a warning about the turbulence and expense of the video games business. Surprisingly, despite its difficult production, it is not a terrible game. It’s not a great one either, but it works as an urban Far Cry-alike, and in terms of mood and atmosphere it is surprisingly accomplished.

Developer Dambuster Studios has, in a bid to lend authenticity to the setup, retconned the series’ nonsense backstory – North Korea invades the US – into yet more nonsense backstory. 70s Steve Jobs is Korean, essentially, and so Silicon Valley becomes Silicon River, Bill Gates goes to work for the Apex Corporation, and the concept of reserve currency doesn’t exist. Smash cut to the near future and debt-ridden America’s reliance on (compromised) North Korean technology has enabled the ‘Norks’ to infiltrate security networks and sweep across the US: first offering help to stricken, bankrupt US citizens, then cracking down in a brutal fashion.

Philadelphia is under total Korean control, and it’s up to the player and the resistance to break their stranglehold. Districts are divided into three zones: Red zones see occupying forces shoot on sight; yellow zones enable the player to move around freely as long as they don’t arouse North Korean suspicions (by say, drawing their guns or getting too close to patrols), and green zones are fortresses where high-level Korean governance is based.

It’s a cute system, shepherding players between all out action and light stealth, and it plays smartly into your role as a guerilla fighter, switching playstyles from straight-up assassin to agent of change. As well as seizing strongholds, Ubisoft-style, and using the clever level design which treats ruined buildings as complex entry and escape points for your attacks, there’s also the populace to consider: you’ve got to fight for their hearts and minds by stopping street beatings, killing officials, freeing prisoners and the like. Provoke enough dissent and you’ll reclaim the district in a fiery and violent purge of the invading forces.

The visual manifestation of this change is an important part of Homefront: The Revolution’s appeal, because it provides tangible change to districts and with it the feeling that all your hard-fought victories are achieving something. This Philly is, for the most part, a bombed-out greyscale warzone, a warren of interlinked ruined buildings lit with flame and neon in a near-permanent midnight. It’s dirty and dank and oppressive, players scrabbling around in the dirt to get to an advantageous position, the few splashes of colour saved for the Korean strongholds and their bright propaganda signage. It feels like the setting for the best Terminator game never made.

The Koreans are better armed and armoured than you, boasting drones and zeppelins as well as stormtroopers of all stripes, and as such your tactics rarely stray from that of hit and run, scavenge and craft, assassination and sabotage. It gives the game a desperate air. Moment to moment, this is a Far Cry game: if it was called FC: Urban Warfare, nobody would bat an eyelid. Everything from the melee kill animations to the ability upgrades to the threat indicator UI are either similar or outright the same. But whereas that series is famed for its scenery and idyllic assassination, Homefronter’s sheer bleakness gives it a harder edge that can make it difficult to play in long stretches, with the player often feeling as downtrodden as the character they’re controlling.

Sadly, it’s not just the game’s tone that fosters a feeling of inevitable defeat and despair. Homefront: The Revolution nails its atmosphere but stumbles badly with the fundamentals. The biggest issue is that most of the weapons simply aren’t fun to use. Very few have good ‘gun feel’, and for the most part they’re either too inaccurate or lacking in punch for you to feel like you can trust them. You’re not meant to be taking the Koreans on head-to-head, but neither should you always feel like you’re armed with a spud gun. The accuracy issue is mitigated somewhat on mouse and keyboard, but using a controller feels like pot luck, with the game not snapping the crosshairs to enemies quickly or smoothly enough (if it even does at all).

It’s a big blow for the experience, particularly when so much attention has been paid to your guns and how you use them. Like Crysis, players can switch weapon specs on the fly, but Homefront 2 goes one step further and introduces substantial weapon mods which change the way they operate. So a crossbow becomes a flamethrower, among many other examples. There’s an almost Stalker/Metro-ish quality about the weapon designs, with their pleasing clunkiness and function-over-form design, and it’s disheartening to see them not implemented as well as they could be.

Other issues conspire to prevent Homefront: The Revolution from reaching its goals: the world is great, and some of the missions themselves are well crafted, but the game’s middle sags considerably: it doesn’t quite have enough fresh ideas to see all but the most committed through, and when it introduces new areas or mission types it often doesn’t use them quite well enough, falling back on the go-here-liberate-that design (an area suffering the fallout from chemical warfare is a good example).

There’s a mission-based co-op mode for up to 4 players, and a fairly interesting one at that (with all manner of unlocks, perks, loot crates, and vanity items) but as good as it is it’s limited by nature, and I couldn’t help but wish the main game had co-op as well. It’s good-looking in many places, but rough around the edges: AI issues aren’t uncommon (I saw a guy kill himself by running continuously into the tiny flame coming from a burning tyre, like Jam or something) and getting on a motorbike means you can sometimes see that you’re nothing more than a set of arms. Which, on the face of it, is enough to convince anyone the war is over.

Despite its problems, Homefront: The Revolution isn’t the disaster many would have anticipated, and it gets a lot right. If you’re after a Far Cry game this year but don’t want to throw sticks at mammoths, then it’s worth checking out.

How do the console versions of Homefront: The Revolution hold up?I played Homefront: The Revolution on PC, and apart from a few bugs and some unwanted pausing after saving or completing objectives the game generally ran well (i5, GTX 980 combo). The PlayStation 4 version is a completely different story: while it retains the look and feel of the PC build, it runs terribly, so much so that it is one of the worst-performing games I’ve ever played on the machine. Much of Homefront takes place outdoors, and the PS4 version simply doesn’t cope with it: an early-game raid on a house, which sees the player slip past enemies and into the street, slowed to a crawl in our playthrough, and likewise other exterior gameplay was little better. Texture quality is also worse, but the frame rate is the real killer, so much so that I would struggle to recommend the game to anyone at all (and that is with the day one patch installed). As for the Xbox One version: we haven’t played it yet, so tread carefully. If you’ve got a PC, get it on PC.

Not the disaster many had anticipated, but also fundamentally flawed.
6 Great atmosphere Some excellent level design Runs out of steam midway through Poor weapons