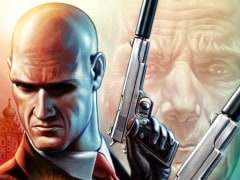 If you’re a Hitman fan of a certain age, then you may remember this rather convoluted procedure:

If not, you’re probably asking yourself why we’re opening a review of what should be a very welcome return to 47’s glory days with technical babble. The reason is this: a lot of you buying Hitman HD on 360 may need it sooner rather than later.

Annoying, yes. But hey, that was a simpler time. Recession was a word used only by concerned barbers. HDMI was something that only PS3 owners cared about. And Hitman itself wasn’t a massive joke.

Fast-forward to 2013 and – you’ve probably guessed this already – it hasn’t been fixed for the Hitman HD Trilogy re-release. (The 360 version comes on two discs, the other one being for Hitman 2 and Contracts, so they’re fine.) It should have been corrected – and if such a fix wasn’t technically possible, then you’d have hoped for a little more guidance from Square on how to get around it.

Sadly there’s not, bar a rather vague warning on the back of the box about ‘older TVs’. Not much help if you’ve never run into the issue before, or disposed of your old leads. It’s an unacceptable scenario, really, and smacks of a publisher just hurrying some of its back catalogue IP out the door for a quick buck.

If you’re inclined to press on past this – and we wouldn’t blame you for not bothering – you’ll find a package that contains three of the best assassin sims ever made. They have their problems, sure. As stated these are essentially slightly polished, up-res’d versions of what was already there: no major changes, for better or worse. Those that lamented Absolution’s action focus, however, will be far more at home here.

First sequel Silent Assassin fixed many of its PC-only predecessor’s faults and nicely wrapped a revenge/redemption story around 47’s globe-trotting exploits. From Kuala Lumpur to St Petersberg, it features some wonderful hits: double headshotting whispering generals from a church tower, feeding a Japanese target Fugu fish, and sneaking into a Russian high society party are some of the many highlights. It’s a massive game, and although it stumbles through some of its larger stages Silent Assassin still encourages invention, imagination and sheer player agency.

Contracts followed 2 years later in 2004, repackaging some of the original game’s levels for console consumption while introducing all new stages in the process. The graphics engine was updated, mechanics and controls tweaked – 47’s sneaking pace was no longer torturously slow – and it ramped up the gore. It starts with 47 gutshot and bleeding and gets worse from there: rescuing human hostages about to be hunted for sport, anyone?

Despite the darker focus, the missions themselves are just as engaging, if smaller in scope. Again, absolute discretion is key, and this is a decent sequel nicely updated – bar the low quality cutscenes which, maddeningly, haven’t been fixed.

Both of these earlier games can’t hold a candle to the later installment in terms of mechanics – 47 is oddly useless in close combat, and actually getting him to do what you want can be fiddly and frustrating. There’s also a sometimes poor sense of internal logic: those that bemoaned Absolution’s AI will be spitting blood here at times here. But they’re still stylish, addictive, and exciting.

And then there’s Blood Money, the best of the bunch – and by that we mean the whole series. Moving 47’s exploits primarily to the US (including a hit in the White House) it amplified what we already loved about the series: 47 is handier, the assassinations are more varied and devious (including the ability to frame them as accidents) and players have to clear the scene of evidence they left behind. Already a 360 title (albeit an early one) it looks far better than the other two, even without any new polish.

Each of the three will infuriate as much as they excite, and there’s no denying they are now very clunky and at times monstrously unfair. They are also, however, games that appeal to the creative and reward the patient: darkly satisfying and utterly empowering.

Three very worthwhile games then, in a package sadly marred by poor decision making from the publisher. With a bit more care this could have been essential. As it is, there’s a load of nonsense waiting for players to wade through before they get to the good stuff. Which seems to be a fitting description of the franchise as a whole these days.

The games included are all worth playing, but there are some unforgivable technical blunders on show here.
5 Blood Money is the best in the series Loads of classic missions Can be fiddly and frustrating Infuriating 50Hz issue