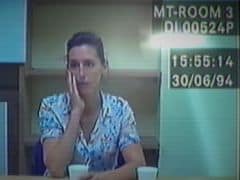 Her Story is one of the year’s best and most interesting games, a detective story that’s as much about piecing together your own place in its puzzle as it is the person you’re ‘investigating’. It plays with the nature of detective fiction without necessarily being a whodunnit, is a period piece which doesn’t peddle cheap nostalgia, and is quite possibly the most dissonance-free title I’ve ever played.

Her Story’s setup is as high-concept as its mechanics are rooted in low-tech. Your role (‘job’ is perhaps too strong a word) is to dig through old interview footage taken from a police investigation and piece together what happened. The interface is simple: it’s an old PC desktop, resplendent in its low-res non-glory and belonging to South East Constabulary. On said desktop are a couple of word docs, a simple (if illustrative) game, a clock, a database tracker, and of course the database that goes with it. The latter holds the original investigation footage: plentiful but short snapshots, many only seconds long and few over a minute in length, of interviews recorded during the summer of 1994 with a woman whose husband has gone missing in suspicious circumstances.

Accessing the database isn’t a matter of watching chronologically-ordered tapes, however: instead tags are assigned to each clip, denoting words or phrases used within them. Naturally this means you’re going to be seeing the investigation in non-linear fragments: timestamps help players mentally order the interviews, as do the changing nature of the interviewee’s clothing and hair. The keywords are the clues you need to input into the search bar to uncover more unseen videos: ‘Murder’ is the first one suggested, and what it dredges up sees the investigation – and your role within it – snowball.

It’s an FMV game, then, but with the rather novel advantage of the live video working in its favour rather than detracting from it. (There’s also something delicious about FMV, once touted as the future of the industry, being used so well to represent the past). It’s a game of performances, and how they change: both in terms of the player and the interviewee, whose marked variation in behaviour hints that she knows – and will eventually show – more than she’s letting on.

That central performance, by actor and musician Viva Seifert, is strong, which is handy as the entire experience hinges upon it. While I’m not convinced that some of the occasional bad acting on show is just due to her character needing to put up a front, in general she oscillates well from scared to intimidating, concerned to calculating, and many things in between. Her Story’s clever conceit helps get the best out of her performance, jumping between her testimony as it encompasses changing interview days and environments, swinging moods, and bizarre-seeming non-sequiturs (or are they?). She comes across as the ultimate unreliable narrator, a fantasist if not necessarily an outright liar, whose sole recorded input (the officers don’t speak) is well-acted enough to be deciphered verbally and non-verbally.

Her Story’s triumph, however, is that the key to working out the game’s secrets is not just found in her changing character, but also yours. When you begin playing you’ll be in the sort of detective mode that Rocksteady can only dream of: I don’t know anybody who has played it who hasn’t got a notebook full of incidents, key phrases, and half-baked working theories. As the game progresses, dragging players (and their assumptions) back and forth along the timeline, playing top cop gives way for something more subtle than just working out what’s gone on. How many of your conclusions are based on the evidence, and how many are based on your own biases and assumptions? Her Story’s brilliance is found in the fact there is no player character: only your actual ideals and other internalisations. Games often challenge reflexes, or wit. They rarely challenge a sense of self. The database tracker, which flicks cells from brown to green when a video has been unearthed, soon becomes a real-time measure of obsession.

It’s a cold case – the 90s references to Princess Diana, certain models of cars, etc are used sparingly but effectively – but it engages in a way that makes it difficult to think of anything else while you’re playing. Her Story is pure agency: your clues, your deductions, your thinking. But it manipulates you as much you it, toying with ideas of storytelling, ideation, imagination, and your position as a reader or player of fiction in the story itself. What starts as a detective drama ends with you questioning who you’re playing as at all. A powerful achievement for a game ostensibly about ordering a video library.

A late reveal sticks in the craw somewhat, especially in a game which expertly dissects the nature of identity. So too does the rather heavy-handed reflections in the screen that occasionally appear – mirrors being a prevailing theme – which provide a glimpse at ‘you’. But these are small missteps, and they don’t stop Her Story from being utterly unique.

Sophisticated, engaging, and utterly unique.
8 Excellent presentation Utterly engaging Some narrative elements seem out of step with others