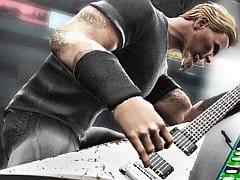 There’s a real danger that Guitar Hero may be falling into the same trap that EA’s FIFA series did in the late 1990s, in the sense that we seem to be getting more games than we arguably need. This year we’re already set to receive GH: Metallica, GH: Van Halen and GH: Smash Hits, as well as proper follow up to last year’s wildly successful GH: World Tour. As much as I love these strum-em-ups, it’s hard not to be a bit cynical about this flurry of full-price releases – particularly when DLC offers a cheaper way to expand the existing titles.

Moaning aside, Guitar Hero: Metallica is actually a very accomplished release. It’s a niche product, certainly – but one that pursues a musical direction more in line with the earlier entries in the series. Personally, I liked the broad mix of genres in last year’s World Tour, but many long-term GH fans seemed to feel that there wasn’t enough metal on the playlist; if you shared that opinion then Neversoft’s latest version might just be the perfect tonic – assuming, of course, that you like the work of Lars Ulrich and co.

What you essentially get here is 49 tracks metal and heavy rock tracks – 28 of them culled from Metallica’s back catalogue, and a further 21 selected by the band themselves. The former category contains most of the group’s biggest tracks, including Enter Sandman, One and Master of Puppets, while the latter includes choice cuts from the likes of Slayer, Mastodon and System of a Down. As always, it’s probably worth checking out the full track listing before you whip out your credit card. Everyone differs in their taste in music, but I’d expect most metal fans to be reasonable pleased with the overall selection – and since this game is basically a re-shelling of World Tour, all the tracks can be played with a full band of you and up to three chums. You also get Neversoft’s music studio – a tool that allows you to build and record your own tracks (minus vocals). As I said in my review of World Tour last year, this feature will only be used by a minority of gamers, but it’s a pretty nice bonus all the same.

The core rhythm-based gameplay remains the same, and it’s as fun as ever. The Guitar Hero action has always felt most “at home” when dealing with elaborate solos and evil-sounding riffs, and the bundled tracks offer both in abundance. As a general rule the level of challenge feels higher than on most of World Tour’s offerings, but this is probably something that will be welcomed by veteran players. The main career mode (which I’ll cover in a second) does a pretty good job of catering to newcomers in its early tunes, but at the other end of the spectrum there are plenty of complex songs to test your skills – Master of Puppets seems particularly demanding. Expert drummers can now rejoice in an extra hard setting for certain tracks, a challenge that necessitates the use of a second kick pedal. Unfortunately we’ve only got the PS3 version of this peripheral and the 360 version of the code, so we’ve not had a chance to try this out yet.

Aside from the presence of the Metallica tracks themselves, the main draw of this game is a career mode that allows you to play as the band’s warm-up act. The story kicks off in an impressively dramatic fashion: Metallica themselves appear walking in slow motion to the sounds of an Ennio Morricone track, before bursting straight into For Whom The Bell Tolls, and then The Unforgiven. It’s an exciting opening that sets the tone, allowing the player to “be” their heroes. After these two tracks you get a cutscene, in the standard Guitar Hero cartoon style, that initiates the story of your own band, a group of fans inspired form their own rock quartet.

Career progression is a matter of working your way through several tiers of increasing difficulty, each of them linked to a specific venue – including Donnington Park and The Hammersmith Apollo. There are generally at least five songs to a tier, but to progress to the next location you merely need to earn a set number of stars. Considering that you get three stars for a mediocre performance, it really isn’t too hard to do this, and in fact you can complete the whole career mode by acing just a fraction of the songs on offer. This setup builds upon World Tour’s design in working to eradicate difficulty spikes: if there’s one track you don’t like or that you suck at, you can just turn your attention elsewhere.

While this pleasantly loose structure makes progress relatively easy, there’s an added bonus for visiting all the songs in career mode: as you play through tracks you’ll unlock lyrics, trivia presentations and video presentations. I can’t say I was expecting to find this content, but it certainly comes as a pleasant surprise and should be an extra treat for fans. Indeed, as a complete package GH: Metallica feels like a product that’s been put together with its fans in mind. The only real hiccup in proceedings is a lack of support for exisiting Guitar Hero DLC. If you’ve bought the Death Magnetic album you’ll be able to play those tracks, but if you want to play anything else you’ve acquired you’ll have to eject your disc and revert to World Tour. This seems like a lazy bit of design, so hopefully this is something that will be fixed in subsequent expansions.

Other than this grumble, there’s little I can complain about with this release. If you’re new to rock-rhythm games then you might be better off with either World Tour or Rock Band 2, since both titles offer more songs and a greater range of musical genres. On the other hand, if you’re a big fan of Metallica and metal in general then this has everything you could want – just don’t go expecting any massive innovation.

If you're a big fan of Metallica and metal in general then this has everything you could want - just don't go expecting any massive innovation.
8 A great tracklist, if you like Metallica Some smart revisions to career mode Nice bonus content It's nothing new