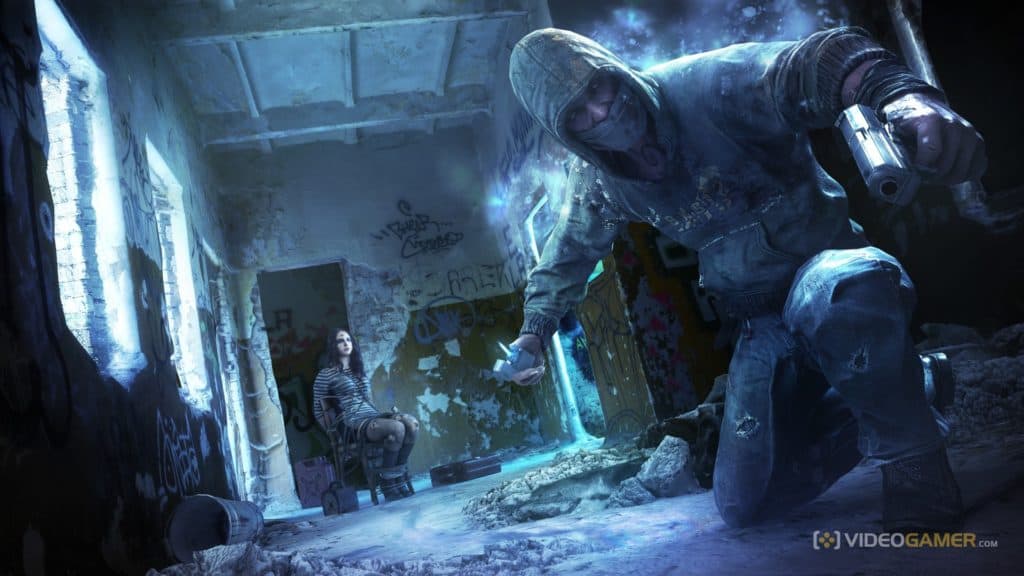 Get Even is a weird game, and you’ll probably never have played anything like it before. It’s a Russian nesting doll of stories and perspectives on a murder mystery that all bleed into one another, so you’re never quite sure — even at the end — what’s been happening. Which is probably the point.

What you know is this: you, as Cole Black, tried to save a girl who was kidnapped and strapped to a bomb, and arrived too late to achieve anything except the pair of you getting caught in the explosion. The next thing you know, you awake in the grounds of an abandoned (and aren’t they always?) asylum, and are chivvied around the various buildings by Red, a mysterious figure who only appears to give you instructions to ‘Proceed!’ on TV screens. Red has developed a headset called the Pandora device that uses visual stimuli to transport the wearer back into their memories, and with one of those strapped on Cole must try to reconstruct both the kidnapping and the events leading up to it.

That much you know. But not for certain. As Cole wanders through the asylum, now repurposed as Red’s Pandora facility, he finds old medical records hinting at forced amputations, fragments of voice recordings from an increasingly unstable doctor, and wooden dummies in odd poses that move when he isn’t looking (not to mention Red’s other ‘inmates’, who are on a sliding scale from ‘normal but unhappy’ to ‘incredibly violent’). As he wanders through his memories he finds them fragmented, incomplete, and unstable. Sometimes they’re not even his, veering between firefights at abandoned warehouses and sections of a family home, floating in darkness.

The layering of broken memories is where Get Even does some of its most ingenious storytelling. Cole loops through the same thoughts several times, obsessing over certain memories the way people do in real life. You run into thoughts smashed together because they’re linked in Cole’s mind through a person or idea: there’s a striking scene where you must navigate a graveyard whilst an upbeat pop track blasts through Cole’s subconscious, and you don’t find the link until after the fact.

Get Even uses audio cues, often spectacularly, as another tool to keep you confused and on edge. You sometimes hear the slow, unbearably loud tick of a huge clock, sometimes disembodied voices shouting half heard things. In the Asylum, some sections are accompanied by violins, singing, and hammering on doors that you can hear getting louder or softer as you walk past, but can never quite place, repeating over and over again until they suddenly stop — which is almost worse. The recommendation is to play with headphones on, which is a recommendation I would follow. Although it is much more frightening.

You wouldn’t necessarily think of Get Even as a horror game, though. It’s much more of a creepy head fuck (technical term). Although you’ll probably figure out what’s going on a good while before Cole, even though he constructed an evidence room in his head like the gruff, methodical ex-military man that he is, in a different section of the game you play as Red, which comes with some more twists you won’t be expecting, though it maybe pushes up against the edge of player exasperation with the final one.

The mystery and scene setting are together very compelling, but where Get Even stumbles is in the actual game part of the game. Glitching into scenery is common enough that you’ll start avoiding manhole covers in fear, and sometimes audio cues bug so Red has a go at you for shooting someone when you’ve done no such thing. The loading times are just long enough to become frustrating, especially when coupled with checkpoints that are sometimes very close together and sometimes extremely far apart, so you’re never quite sure if you’re better off manually saving.

The game encourages stealth but makes combat an easier option (what with a ‘corner gun’ that can look and shoot at right angles, which does make for some fun headshots). You may find a large part of your game is spent shooting, but unfortunately it feels unsatisfying compared to actual quote unquote shooters. Cole’s phone helps you discover clues, but has far too many functions that aren’t used that often, so it becomes a bit annoying. It’s at its best when, for example, you start getting creepy texts from unknown numbers. Get Even seems a bit worried that the story alone won’t keep you interested.

Ultimately, the interesting, unsettling, headfuckery that is Cole exploring the creepy asylum and accidentally walking into someone else’s thoughts is the more enjoyable part of the game, but it’s also the smaller bit of it. Get Even isn’t a bad game, and if anything it’s a good reason to keep an eye on the studio, but the whole is just slightly less than the sum of some very fine parts.

Get Even's use of layered sound and even more layered story is unsettling and great, but other awkward mechanics make this psychological thriller a bit less than the sum of some very fine parts.
7 Great, weird layering of mystery story Truly excellent sound design Bit buggy at points Other mechanics are less good