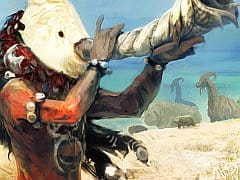 Mother Nature is a cruel mistress. She cooks up storms, gives birth to tsunamis, spreads fires and – in a rather unladylike fashion – belches red-hot lava from fissures in the earth. She wipes out entire villages on a whim, without a care in the world for their half-naked dwellers. As the sole villain in From Dust, she’s a powerful adversary indeed.

Thankfully, you’re more powerful. As the Breath of God, fuelled by the unwavering faith of an itinerant tribe, you can quite literally move mountains to protect them from her wrath. You have the ability to influence the very geometry of the land: you can build bridges of earth, redirect rivers and part seas. And you can do all this dynamically, sculpting the landscape like a potter might a lump of clay.

The physics in From Dust, Eric Chahi’s spiritual successor to Populous, are nothing short of astounding. The simple act of picking up soil from one location and depositing it in another is a small technical marvel. Watching the world react to your divine interventions is without a doubt the game’s strongest asset.

As the god of a tribe of wandering, mask-wearing nomads, it’s your job to ensure their journey through the world is a safe one. Each new territory shares the same objective: to create settlements around four totems dotted about the environment. In terms of its moment-to-moment gameplay, you’re helping the tribe reach these totems by building a path there. With a village at each of the four idols, passage to the next area is granted.

It takes five tribesmen to activate a totem, whose prayers will cause the surrounding area to spring into life. As long as there’s soil connected to the area in some way, plants and shrubbery will spread like a beautiful virus, eventually attracting wildlife to the area. Covering 100 per cent of an area in vegetation is the secondary objective for each level (and a feat worthy of an achievement).

With each totem successfully acquired you’ll be awarded a new power. Amplify the Breath, for example, enables you to scoop up much larger quantities of matter. Jellify Water solidifies the seas, allowing you to guide your people through alleyways carved in the ocean, just like Moses. Arguably the best of the bunch, Infinite Earth, lets you dump as much soil as you like on an area in a set period of time; this is particularly helpful in volcanic areas where soil is thin on the ground.

From Dust is a god sim, a strategy game, but safely guiding the tribe to each totem is a puzzle, more than anything else. Often you’ll need the power of a specific totem in order to reach the next one. Working out the right order is at the crux of the solution. Each village is constantly at risk of being wiped out by a natural disaster, and it’s your job to ensure this doesn’t happen. Special items about the game world need to be collected in order to keep the village safe. The power to resist water, for example, is vital in surviving a tsunami, forming a little imaginary bubble around the village. Should fire begin to spread through the lands, you’ll want to have some Water Trees planted near your settlements, which expel large quantities of the wet stuff, stopping the flames in their tracks.

There’s definitely a right way to go about doing things, and while the game holds your hand for the first few areas, you’re quickly left to your own devices, forced to work things out on your own. Working out what to do can descend into trial and error, however, and once lava comes into play (which solidifies once deposited) this can permanently ruin a map, forcing a restart. For longer levels, some of which might last up to an hour, this can be quite upsetting.

The game presents a living, breathing world, where you’re just as at the mercy of the elements as the villagers are. There’s no denying it’s a huge technical achievement, but the dynamic nature of the experience is to the detriment of the game itself. It feels sacrilegious to say so, but often the game simply isn’t enjoyable. It can be incredibly frustrating trying to get your villagers where they need to be. At times they’ll get stuck on seemingly flat pieces of land, or faff about for no particular reason – waiting for that volcano to erupt, or for a tsunami to wipe out their village. Time plays a huge role in the game, and getting things done before the disaster strikes is imperative.

The game has the ability to make you feel distressingly powerless. Whilst From Dust is about manipulating your environment, it would have been nice to have a slightly more extensive range of commands to dish out to your villagers. Getting the little chaps from A to B is a constant struggle. I’m well aware this is what the game is all about, but it’s challenging for the wrong reasons. Questionable AI and a single command of ‘go here’ – which randomly assigns five villagers to the task, who often aren’t the best people for the job – is at the root of the frustrations. Being able to choose who you sent, or at the very least which of the other villages they left from, would have made things much easier.

The experience takes on more of a sandbox form at the end, and it’s here that things start to become a lot more fun. With the creative freedom to do whatever you want with the land (and create the totems themselves), the notion of your godlike nature is reinforced.

As you progress through the story challenges are unlocked in a separate mode off the main menu. Here, you’re presented with bite-size problems in which you’ll need to use the powers of the Breath to overcome. One such puzzle has you helping the tribe cross a series of waterfalls, demanding that you absorb the water before it carries the poor villagers downstream.

Another challenge presents a countdown to a tsunami, with a village sitting nervously on the beach in front of it. The idea is to get a villager, who has the repel water power, back to the village in time. He’s standing on a mountain miles away from the village, however, and will never get there in time – not unless you can find a rather unorthodox way of speeding his descent. There are 30 of these challenges in total, extending the life of the 8-10 hour story considerably.

From Dust is a glorious reminder of how fascinating a good god-sim can be. Both from a technical and visual perspective it’s hard to fault, but the ‘game’ gets lost somewhere amongst all the incredible things you can do with the terrain. There’s a poor sense of progression to it, ultimately; once you’ve set up all four villages, you’re off and onto the next area. It never feels like your efforts are leading to anything.

It’s easy to appreciate From Dust, but harder to enjoy it. Regardless of this fact, it’s an important game – bold, innovative and different – and well worth checking out during the summer drought.

It's easy to appreciate From Dust, but harder to enjoy it. Regardless of this fact, it's an important game - bold, innovative and different - and well worth checking out during the summer drought.
7 Captures 'nature' well Fantastic physics Villager AI can frustrate Could do with more commands

The first game in 12 years from Ã‰ric Chahi.

The first game in 12 years from Ã‰ric Chahi.