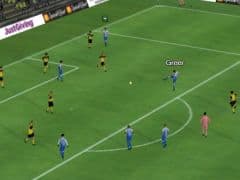 I have a pounding headache. This isn’t because I’ve been frantically negotiating last-minute transfers or trying desperately to tweak my formation, it’s because Football Manager Classic is so clunky and slow it makes me want to eat my Vita.

FM Classic uses a similar interface to the PC version, and this creates a ton of problems. For starters, the font is absurdly small. Anybody with less than perfect vision will have a hard time seeing what’s written on the screen. Secondly, you’ll need fingers the width of a gnat’s ass to accurately press the button you want.

Scrolling through menus is fiddly, and certain functions require you to use buttons and screen presses in conjunction. Did I also mention this game is incredibly slow? As a test, I ran a match on both the Vita and mid-range i5 PC with 6GB RAM, commentary only, fastest speed. I had finished my PC game, done a half time team talk (and some substitutions) and made some notes before getting to half time on the Vita. Considering this is supposed to be a game I can jump into on my commutes, that’s pretty shambolic. I’d be lucky to get through much of a season on a flight, let alone a bus journey.

Football Manager Classic is anything but. It’s simply made me want to go back and play the PC version rather than sit around bored for what feels like ages waiting for a single Vita match to end. A great simulation might still be running behind the scenes, but the Vita doesn’t present it in a way that you’ll want to experience.

We originally stated that players couldn’t be moved into positions vacated by players who had been sent off. This can be achieved by holding down the left trigger and dragging players around on the tactics screen. This doesn’t affect how we feel about the game.