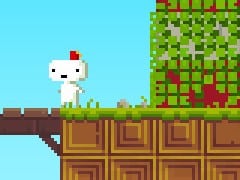 By and large indie games don’t get a lot of pre-release hype. Plenty become wildly successful after the fact, but the path to glory is fraught with peril as indie developers toil away in relative obscurity. Fez is the exception. Having been in development for five years, its Montreal-based creator, Phil Fish, has become something of a celebrity going so far as to co-star in the upcoming award-winning documentary, Indie Game: The Movie, which follows Fish’s legal, financial, and emotional tolls as he pours over his labour of love. In its most harrowing scene he plainly states that if Fez doesn’t get released he will kill himself. It’s such a bleak, desperate portrayal that one wonders if the final product could possibly be worth it. Now, having played the full game, I can say that Fish and company’s work was not in vain and Fez lives up to the lofty expectations bestowed upon it.

Fez begins like so many retro adventure and RPGs, with its protagonist – in this case a little blobby fella named Gomez – getting out of bed. From the first screen portraying Gomez’s room we’re introduced to some fourth wall breaking humour with a Zelda poster (minus the text) hanging in the background and a drum kit adorned with developer, Polytron’s logo. Upon leaving his hut to talk to fellow villagers we’re greeted with lines like “Today is special day,” and “Adventure is ready.” It’s easy to think Fez is shaping up to be a satire of 8-bit gaming, but it soon becomes apparent that it’s its own beast.

This is first evident when Gomez encounters an otherworldly cube – a shape that shouldn’t exist in this 2D land – that instils in him the ability to see his once two-dimensional world in 3D. You still move along a 2D plane, but hitting a shoulder button rotates the scene 90 degrees. Objects that look far away from one angle will appear nearby from another, and the absence of a traversable Z-axis allows such visual trickery to reshape reality.

Shifting perspectives becomes essential when scouring Fez’s world for secrets. Fez doesn’t contain any combat, upgrades, or game overs. Instead, the emphasis is squarely (pun intended) on exploration and puzzle solving. The goal of the game is to collect a series of cubes, but there are plenty of other treasures hidden throughout dozens of interconnected areas and sussing out their locations can be extraordinarily difficult. Sometimes unearthing collectibles is as simple as rotating the level a few times to reposition platforms, but what’s most surprising is how many puzzles require thought outside the game’s central mechanic.

Fez’s arcane world is full of mysterious glyphs, obscure machinery, and all manner of oddities like a strangely engraved bell, bizarre grave-like stones, and an ominous owl statue that looks directly at the camera no matter which angle you spin the environment. In an age where games tend to handhold to the point of ruining solutions, it’s invigorating to encounter so much peculiar paraphernalia, unsure of its purpose. I found myself scribbling down notes and taking pictures of Fez’s more bewildering eccentricities for future reference. Where games like Uncharted give you a treasure hunter’s journal, Fez tasks you with creating your own.

One minor gripe – there were a couple times where I uncovered hidden QR codes. I appreciated having to think outside the box and use my iPhone on these, but I don’t think we’re to the point where everyone has a QR reader handy, so it’s an odd, somewhat off-putting assumption to make of players.

At least these are optional. Completing Fez only requires you find half of its collectible cubes. There are plenty of puzzles that can’t be solved initially that you’ll have to return to, so while several of Fez’s secrets are buried deep, you’ll rarely hit a point where you can’t progress at all.

Perhaps more appealing than the brain teasers is Fez’s mesmerizing setting. I’m not usually a fan of low-fi aesthetics for the sake of looking retro, and initially Fez might resemble an 8-bit throwback, but upon closer inspection it’s a finely detailed world simply made out of cubes with scenery as varied, atmospheric, and inspired as any triple-A title I’ve played. I’m reminded of what Roger Ebert said about black & white films looking more dreamlike and mysterious than their colour counterparts. That same notion applies to games where I’ve become accustomed to them looking more or less like reality, and this impressionist rendition of lost cities, ancient ruins, floating islands, lonely lighthouses, and foreboding graveyards is vastly more striking. The generally serene landscape has that distinctly Canadian warmth to it with shades of Scott Pilgrim in Gomez’s hipster flat and expressive minimalist character design, while one can see a little Sword and Sworcery in the pixelated art and soothing chiptune soundtrack (indeed Bryan Lee O’Malley and Superbrothers are given a special thanks in the credits).

Ultimately, Fez is a game about tinkering around in a labyrinthine world while wearing a funny hat. Maybe you’ll stubbornly insist on gathering every collectible, maybe you’ll just want to cruise through its cubist countryside until you’ve hit your head against a wall, or maybe you’ll trek around snapping pictures to decipher the cryptic lore. Fez’s ornate world, sumptuous audiovisual presentation, and cryptic machinations made me feel like an adrift archaeologist filled with wonder. I say it belongs in a museum.

Editor’s note: Fez programmer Renaud Bedard has since informed us that all QR codes have harder alternate puzzles associated with them that don’t require a QR reader.

The games starts Gomez, a 2D creature on a voyage of discovery…

The games starts Gomez, a 2D creature on a voyage of discovery…