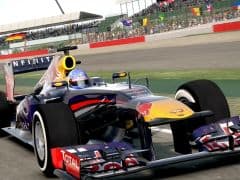 Much like Sebastian Vettel’s unchallenged run of victories, Codemasters’ F1 series is beginning to take it easy through a lack of competition. Despite offering an array of legendary drivers from across the 1980s and ’90s, this year’s progress isn’t loaded with enough fuel to capture the attention of those who think Toro Rosso and Eau Rouge are two selections from Dulux’s upcoming Autumn range.

While the franchise doesn’t need a significant pit-stop to impress, technical upgrades will fail to attract the uninitiated. F1 2012’s brutal handling has received a slight tweak to allow tighter overtakes and extra leeway when battling against spins, but it takes plenty of frustration and dedication to ensure you finish races without a 30 second penalty, or indeed, finish the race at all.

Classic cars highlight how restricted F1 has become, as without the hassle of systems such as KERS and DRS, raw driver skill becomes most important. Romping through Surtees at Brands Hatch in Nigel Mansell’s classic Williams setup feels different to the pillow-protected vehicles of today, and as if something could go dangerously wrong at any moment.

Assists help less experienced players, including racing lines, automatic braking and chatter from your crew. Last year’s rewind feature is back and eliminates the sting of a last-minute crash at Monza’s Parabolica, and the option to save your race at any time helps cut frustration down.

This year’s presentation is a true high for the series, as everything from the shiniest cockpit to a Tron-inspired soundtrack helps replicate the drama of a Sky Sports broadcast. Career mode is less slick – and forces you into taking a mind-numbingly boring Young Drivers test – but an array of scenario-based challenges bolsters the usual Time Attack, Grand Prix and online options.

F1 2013 is the franchise’s most complete, versatile and thoughtful iteration yet. Fans of the sport will lap up what is an extremely rewarding product. For everyone else, Codemasters’ lone residency atop the podium ensures the upgrade over last year’s game is minimal, especially if you don’t know the difference between Gerhard Berger and the Nurburgring’s fast-food stand.

An accomplished racer, but one that needs some competition to really move forward.
8 Excellent presentation and soundtrack. Packed with content to play through. Career mode needs a revamp. Minimal changes gives casual players have little reason to buy.