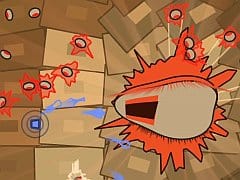 Since the arrival of Geometry Wars every console has strived to secure its own seminal top-down, arena-based shooter. So far the PlayStation 3 has done fairly well with two of the better PSN releases; namely Super Stardust HD and Blast Factor. Both are fantastic, but fall some way short of rivalling Bizarre’s irresistible neon blast-’em-up.

Finally though, the wait is over, and a twin-stick game to rival the great Geometry Wars has arrived in the form of Everyday Shooter; the product of the sole efforts of one-man dev team Jonathan Mak. Take a peek at any screenshot and you’ll immediately see that Mak’s creation will be eagerly lapped up by the liberal, ‘games are art’, academically minded players.

However, despite falling into this category, Everyday Shooter has far more interesting elements that make it anything but everyday. It quite literally defies almost every rule in the book on making decent 2D shooters, or shmups, and is still one of the most involving, addictive hardcore games of recent months.

If you’ve ever come across Rez or Every Extend Extra then it should come as no surprise that Everyday Shooter is a synaethesia game, as the three share a very similar visual style. If you aren’t familiar with synaethesia, the genre gets its name from a recently recognised medical condition where people cannot separate the colours they see from sounds that inexplicably accompany them. In video games, synaethesia refers to games that assign sounds to your actions, meaning that as you play you inadvertently create the soundtrack to the game.

In that regard, Everyday Shooter is much like an album. Each of the seven levels has a different background tune, and every bullet that you fire, pick-up you collect and enemy you destroy adds something perfectly in time to the gentle cocktail of guitar riffs that are the backbone of the game’s sumptuous audio design. Even on the menu screen, moving between options is linked to the acoustic backdrop, and throughout the sound is nothing short of wonderful.

However, it is the gameplay itself that bends and breaks the rules of what a shmup should be about. By modern standards, Mak’s brainchild is rather slow and meandering in pace, and yet still it feels intense and it is really quite tricky as you near the end. What is particularly peculiar though, is that the very dynamic of the game changes from level to level, along with the visual style and twinkling soundscape.

Shmups are of course about scoring, and scoring usually comes from chaining enemies. What is unusual about Everyday Shooter is that the chaining system is different in every level. Early levels use things like ‘radial chains’ where an enemy’s explosion causes a neighbour to detonate, while later on far more conceptual ideas develop, with subtle graphical clues as to how they work. Most of the time this boils down to destroying the big enemies and watching as they somehow take down their smaller siblings, but there is still a keen feel for variety throughout.

Some may feel that the very variety that defines Everyday Shooter also breaks its flow, and score hungry pixel pilots may feel that the emphasis on experience over achievement is not to their taste, but on the whole this nugget of serene gaming is near flawless. This certainly won’t be too many tastes, but if you enjoyed Every Extend Extra or seminal Flash game Boomshine, this latest PSN shooter is one you’ll want to play, well, every day.

This certainly won't be too many tastes, but if you enjoyed Every Extend Extra or seminal Flash game Boomshine, this latest PSN shooter is one you'll want to play, well, every day.
9 Incredibly satisfying A refreshing change from the norm Both soothing and hugely challenging Not to many tastes

Stylish shooter for the PSN.

Stylish shooter for the PSN.