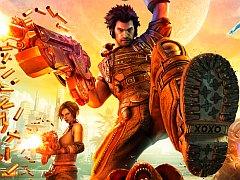 Bulletstorm is: a bromantic comedy starring two meat-heads and a chick with huge norks; a lesson in creative swearing and vulgarity; an interactive compendium of interesting things you can do with a gun; a middle-finger to the current customs and conventions of the FPS genre; and a shout out to its peers: “Hey! Assmaggots! Why you all gotta be so serious!?”

And they are. Killzone 3 might be technically flabbergasting, with glorious environments and reload animations that could make a grown man cry, but it “lacks heart”. From the word go Bulletstorm is different. The opening scene finds mercenary captain Grayson Hunt swigging on a beer, staring through a wobbly haze of inebriation as he attempts to shoot a bottle off the head of a captured enemy. Alcoholism is one of a long list of character flaws afflicting our wannabe William Tell, but it doesn’t take long to grow attached to the brute regardless. His loose tongue and quick wit make for entertaining banter, which shines brightly during the frequent exchanges with his facially disfigured squad-mate, Ishi Sato.

Like everything else that goes wrong in the game, Ishi’s face is Grayson’s fault – caused in the ramifications of a drunken decision to start a fight with the vastly superior space cruiser of nemesis General Serrano. Revenge drives the remainder of the plot, and while you might not expect a game of Bulletstorm’s nature to offer much in the narrative department, the strength of its characters and comical situations turn out to be one of the title’s strongest assets.

Those with sensitive ears might find the game to be crude and vulgar (which it is), but the use of profanity really is masterful. As well as dropping plenty of f-bombs, Bulletstorm combines words such as ‘dick’ with other anatomical lovelies – like ‘tits’ – for a brand new swearing experience. Chances are you’ve heard dick-tits already, but the wonderfully cobbled together ‘fungal rim-job’ is perhaps the best of the bunch. Not far into the story, Trishka gets in on the verbal sparring matches, at which point you’ll realise it’s not just the men that need their mouths washing out with soap.

After escaping from their burning vessel at the start of the game, Grayson and Ishi (with his face patched up) find themselves in some backwater corner of the galaxy. It’s on this paradisiacal planet that the majority of the game takes place; a world populated with palm trees, waterfalls and dazzling pink sunsets. Oh, and mutants. The hooded freaks, gang members and hideous abominations that stroll about decaying architecture are a striking contrast to the landscape itself.

Disposing of them is a violent and bloody affair, largely defined by the game’s Skillshot system: 131 specific ways in which you can kill your enemies. It’s the mechanic behind Bulletstorm’s Kill with Skill! slogan, the sentiment that if you put some creativity into your gun-slinging, you’ll be rewarded.

Bulletstorm contextualises its main mechanic with the Leash, a rope of energy that grades your performance as you fight, with those who make use of Skillshots getting resupplies via shops scattered about each level. This Darwinian approach to battle actually makes quite a lot of sense when you think about it – survival of the fittest and all that. These shops not only offer upgrades and power-ups, but feature a database of every Skillshot in the game.

At first you’ll rely heavily on the bullet kick: a sturdy boot to the face which sends an enemy flying into the air in slow-motion, at which point they’re ripe for pumping full of lead. You could even choose to yank them back with your trusty Leash and kick them again, if you fancied. After time, however – once you know your weapons and surroundings – you’ll be making use of far more entertaining executions.

Although you’re often at the mercy of your environment in terms of what actions you can perform, the game really lets you put your own stamp on each level. Run and slide-kick an enemy into a cactus, for example, and you’ll have executed ‘Pricked’. To add ‘Om nom nom’ to your database, you need to send an enemy into the mouth of a carnivorous plant, who will violently masticate the poor fool to death. You might choose to use the Thumper – an orb of electrical energy released from your Leash – to bring an airborne foe thundering back down to earth. ‘Slam Dunk’, baby.

As your gun collection grows, more gruesome finishers become available. Take the Penetrator, for example, a weapon that fires high velocity drill-bits to impale an enemy to the nearest surface. Each weapon has an alternate fire mode, too, which increases it’s firepower by expending special charge ammunition. In these instances, the Penetrator benefits from pin-point accuracy, so you could choose to fire off a drill into a mutant’s face for the ‘Root Canal’ Skillshot. In this charged state, it also becomes lethal at close range, capable of tearing an enemy’s insides to ribbons.

There’s a Pokémon-like mentality to trying each Skillshot in the game. Gotta catch ’em all, right? As you scroll through the database, you’ll notice which you’re missing and work out what you need to do to nail it. This is how the game is designed to be played. True, it’s possible to complete the campaign without paying this side of the game much heed, but you’ll completely ruin the experience for yourself because, more than anything else, it’s beneficial to the player. The more points you earn from a kill, the more credits you have to spend at the Drop Shop. Killing with skill is very much to your advantage.

This is taken to new levels in Echoes mode, where there’s something even more important than survival on offer for big scores: bragging rights. You might have had a taste of this already in the demo, which incites score-based competition with the inclusion of leaderboards. Using the levels that form the campaign, the idea is to use Skillshots to rack up as many points as humanly possible. To do this, you’ll need to learn the best route through each level and work out which Skillshot is most effective on which enemy. This is where the longevity in Bulletstorm comes from; getting to the point where it’s impossible to squeeze any more points out of a level and making a mockery of your friends’ scores in the process.

There’s multiplayer too, of course, but once again People Can Fly has decided to go against the grain of current conventions by dropping the bog standard Deathmatch. In its wake is Anarchy mode, a team-based event similar to Gears of War’s Horde mode. Here, up to four players take on increasingly difficult waves of enemies, but with a twist. Killing is not the key to reaching the next wave here, score is. The game militantly enforces working as a team, with extra points on offer for using all-new, multiplayer-specific Skillshots. ‘Double Penetration’, for example, asks that two players riddle an opponent with bullets at the same time. Co-ordination and conversation between team-mates is vital if you’re planning to reach the latter waves. The kind of thinking required to do well in Anarchy mode is something quite unlike a multiplayer game mode has thrown up before.

Despite offering gorgeous scenery and stunning vistas, the game can appear a little rough around the edges at times. It suffers from occasional texture pop-in (as is common in games using Unreal Engine 3) and during more hectic sections the frame-rate can suffer considerable drops. It’s hard to concern yourself too much with all this during play, though, as there’s always too much going on.

The eight hour-odd campaign is fantastically well paced. Long stretches of ‘everyday gameplay’ are punctuated with on-rails mini-gun rides, drawn out sniper fights (where you can take direct control of a bullet) and boss fights against building-sized plants. Perhaps the most memorable set piece (and possibly the best part of the entire game, actually) furnishes Grayson with a handset for a remote controlled cyborg-dinosaur that shoots lasers from his eyes. It’s every bit as awesome as it sounds.

At a time when games are brimming with gritty realism, a single-minded approach to multiplayer and oh-so-serious plots characterised by a chorus of military buzz-words, Bulletstorm is a refreshing departure from the norm. Behind the f-bombs and dick-tits are some incredibly mature and well thought out mechanics. Not only does the Skillshot system invite a completely new approach to shooting in single-player, it uses scores and leaderboards to inspire competition in a completely different vein to the amalgamate of contemporary shooters. Given the current landscape of the genre, it’s fair to say that Bulletstorm is not only a great game, but an important one, too.

Given the current landscape of the genre, it's fair to say that Bulletstorm is not only a great game, but an important one, too.
9 Plenty of memorable moments Fantastic script Skillshot system is inspired Occasional technical let-downs