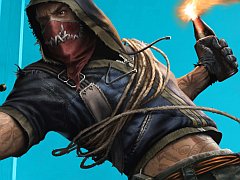 If you believe all the huffing and puffing from this oft-delayed game, Brink has managed to blend the single and multiplayer FPS into one glorious whole. It hasn’t, but the end result is a shooter with the potential to be a whole lot more interesting. British studio Splash Damage, which grew to maturity off the back of the nineties modding scene, has managed to create a multiplayer-focused game that’s ambitious, rewarding and – most importantly, perhaps – unique.

To put it simply, Brink might go to great lengths in a bid to facilitate solo and co-op play, but it’s the nail-biting tactics and tension which comes from the eight-on-eight adversarial play which causes the game to shine. Go for a spin in its inferior solo mode and you’ll end up frustrated, bored, and likely on the cusp of severely regretting the time investment.

Brink’s sixteen objective-based campaign levels, spread across eight different overall maps, simply don’t tie themselves together in the manner most single-player adventurers would like. While Brink’s framing of a post-apocalyptic society clinging to their existence onboard a super-structure at sea certainly fits the bill for the narrative frame, providing enough contextual oomph to justify hectic multiplayer squabbles, the game’s personality comes from its distinct visual identity, caricaturised avatars, and extensive customisation options rather than plot twists and the odd boss battle.

I believe the Ark is a world you must experience with other people, and its stories are ones you create through repeated encounters and vainglorious moments of collective triumph. The tales of one player vaulting over a ledge, sliding around a corner at the last second to defuse a bomb perilously close to exploding, are the ones that will be remembered over the coming months. In the background of this world is the enigmatic Founders’ Tower, an Apple-chic spire jutting out of the horizon, but the foreground of the experience is you and your repeated personal squabbles placed within the setting of two factions engaged in civil war – the steely Security and the ragtag Resistance.

In a roundabout way, that’s another reason why Brink just doesn’t work on your tod. I don’t think anybody expects the AI cohorts to replace the deep intricacies of human players, but what’s on offer here just isn’t up to scratch. The CPU is adequate at defending a location, where it can usually lock down an area with military precision, but if the situation requires the AI drones to go on the offensive then the whole illusion crumbles into a painful facade.

Co-operative play, with your faction’s octet likely rounded out with the assistance of a few allied bots, is significantly less painful, but even then it feels more like a training mode for versus play rather than a defined experience in its own right. Brink might attempt to blur the lines between single, multi and co-op play, but there’s definitely a clear winner.

It helps there’s enough opportunity to gently segue into versus play, however, because Brink is complicated; that’s proved effortlessly by the fact it won’t let you access basic weapon modifications until completing a quartet of tutorial-meets-challenge rooms, or that it recommends you watch a half-hour movie to explain its many intricacies when you first load the game. While Splash Damage has tried to make the game’s rhythms accessible to the average player, there’s something about a non-interactive tutorial of that length which will surely distance a few people from the word go.

But for those with enough patience to stick around, the basic gist is that games are won by completing an unfolding chain of objectives – the other team, naturally, is issued the opposite commands, and each objective has one vital class required to see its completion. Soldiers are called upon to deploy timed explosives; Medics keep VIPs on their feet; Engineers slowly fix or disable vital equipment; and Operatives hack into electronic devices with urgency.

It’s particularly telling that Splash Damage was formed in a period where the PC was the primary platform used to play multiplayer shooters, as its map design hearkens back to an age where twisting geometry and multiple routes to any objective was the status quo. Brink’s complex and rewarding maps have a noticeable whiff of Counter-Strike, which is an accolade of the highest honour. You’ll find yourself lost a few times at the beginning, but it’s worth it for that eventual sense of place and the subsequent pleasure derived from understanding these intricacies.

Brink gets more intricate, of course. Scattered around each of the eight maps are secondary objectives, such as building up staircases for easier access to important vantage points; splinter groups from each team will probably battle to ensure these structures are perpetually yo-yoing between construction and destruction. More important, however, is probably the need to capture and hold supply points to grant much-needed ammunition increases for the entire squad.

You’ve also got to utilise Brink’s distinct and weighty system of movement, exemplified by the zingy buzz of the SMART (Smooth Movement Across Random Terrain) marketing acronym. Hold down the left bumper and you’ll whizz around the level, effortlessly vaulting, diving, and climbing obstacles upon impact. It makes the game fast and snappy, and the claustrophobic corridors and automatic weaponry ensure that gunfights spray out into wild, sprawling affairs.

Once you’ve wrapped your head around Brink’s manoeuvrability, each area transforms into an intriguing 3D puzzle. Holding down the SMART button turns stacks of rusted shipping crates into staircases, overhanging ledges into dangling shortcuts, and, in one instance, a floating model of a shark into a particularly opportunistic way to avoid climbing a flight of regular stairs. Set yourself to the light body type and you’re afforded more speed and the ability to wall jump at the cost of a significant chunk of potential health, whereas play a heavy and you’re denied most of this opportunity but can wield a minigun powerful enough to shred foes into stylised ribbons.

Then there are buffs, which are probably the most important part of each of the four-strong class system. Soldiers become dispensaries of surplus ammunition, Medics can extend life bars alongside reviving downed foes, and Engineers boost damage output between constructing turrets and dropping landmines. These buffs can be applied to yourself and other people on your team and are, vitally, rewarded by generous wads of XP. Sharing the skills of your class isn’t just for the altruistic players – it’s absolutely essential for survival, especially when going toe-to-toe with some savvy opposition.

The last class, the Operative, can’t deploy his own buffs, but has the ability to disguise as a downed member of the other team, spot enemy landmines, take control of turrets, and even detonate a bomb lodged in his head after reaching the required rank. He’s probably the most challenging class to use effectively, but a successful Operative can get up to all kinds of sneaky subterfuge.

Classes can be flicked between at command posts, and objectives are handled by an on-screen pointer that guides players to their chosen destination, easily selected via a radial menu. Here you can choose to busy yourself with primary and secondary objectives, or keep yourself informed of class-specific objectives such as reviving downed allies. While the amount of stuff you need to take into consideration can be flustering, the objective wheel helps point players in the right direction.

Customisation is handled in its own tab from the main menu, with specific clothing options being made available as you shoot up through the 20 levels. You can adorn your body with scars and tattoos, too, but these are permanent and cannot be removed. Brink allegedly boasts over 100 quadrillion clothing and colour combinations (there are no female options, however) across the two factions, which means even the most sartorial of players should find something they’re happy to wear. And, during the game, enemy players always have a slight red hue to make identification simple.

In an especially nice touch, Brink dishes out XP for completing objectives and for landing bullets as opposed to scoring the killing shot, a masterful system that makes the likes of Call of Duty and Battlefield seem positively archaic in comparison. The experience system is perfectly attuned to promote intelligent team play, and with no screen detailing kill and death ratios the onus is very much on the performance of the team rather than its individual players.

As you progress you’ll unlock points which can be spent on upgrading skills, with both general options and class-specific traits available. These are locked by rank, which increases by one with every fifth level to a maximum of five. With a maximum level of twenty you’re left with more purchasable skills than there is points, so there’s no possible way for one character to own everything.

The problem here is that, when you’re playing with random people over the internet, you’ve got no idea what skills you’re going to need. While a few months of play will make it easy enough to have a set of characters tailored specifically for each class, there’s no ability to flick between them in the middle of a game – which means you’re completely stumped if you pick your engineer-oriented character and stumble into a game where there’s already an abundance of turret-droppers.

It’s also a real blow to see no proper lobby system included on the console versions. Almost every other aspect of Brink suggests a studio that knows and understands the ins-and-outs of a multiplayer experience, so to see gangs of players routinely collapsing at the end of games is absolutely bizarre. Unlike almost every other game on the market, you can’t fiddle with your appearance, skills, and loadout at the post-match screen, either, and are instead required to quit back to the menu for such options.

The real question when assessing Brink, however, is whether Splash Damage has created a framework and accompanying scenarios that encourage people to advance their characters, explore its boldly coloured world, and to invest their precious multiplayer time into Brink as opposed to genre heavyweights such as Call of Duty: Black Ops and Bad Company 2. The game will expand and refine over the coming months, with strategies being developed and, hopefully, patches being applied to iron out any of the residual bugs with the network code – some of which were observed with the review code supplied, but we were assured would be fixed in time for launch.

Brink is a game that deserves a chance, and those with a penchant for the multiplayer shooter owe it to themselves to give it a look. It’s not without its faults, some of which are more serious than others, but Splash Damage achieves the impossible: a game that feels fresh in the stalest of genres.

Brink is a game that deserves a chance, and those with a penchant for the multiplayer shooter owe it to themselves to give it a look.
8 Excellent range of tactics and options Versus mode is the highlight No lobby system Shoddy AI