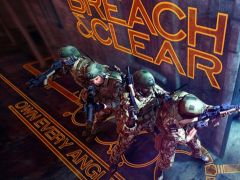 Breach & Clear is face-scrunchingly generic. You take a quartet of Navy SEALS to Afghanistan, China or Turkey and carry out instructions hinted at in the game’s title. Once your minions have been assigned a door, you blast through it and aim to quickly silence any pests who wait inside. After selecting each individual’s route through offices, warehouses and other lifeless locations, you set the direction of their gaze and hope it’s lucky enough to catch a glimpse of the enemy.

Controls are unresponsive and difficult to use. Choosing the path of each soldier is often fiddly and takes multiple attempts to set correctly. Not being able to see your opposition before entering a room eliminates any sense of strategy, especially when it becomes clear the only way of succeeding is to cover each angle and hope the terrorists don’t have enough numbers to mow your front-runners down. At times, your knuckleheads will stare their target in the face with nothing but a tiny chest of draws separating them. Of course, nobody shoots.

At £1.99, you are given just one of three specified game modes, and only 15 of the 25 ‘Terrorist Hunt’ missions are unlocked. Both ‘Hostage Rescue’ and ‘Bomb Defusal’ sections are completely missing. Slick presentation, a well-implemented soundtrack and tonnes of customisation options can’t veil a game that offers little imagination, a non-existent narrative and the willingness to short-change your investment.

It’s an experience that only lives up to its name in one way; it makes you want to get in and out as quickly as possible.

Good presentation, but the game is sorely lacking. A military XCOM this isn't.
4 Slick presentation Decent soundtrack No strategy needed Most content is “coming soon”

Xcom meets Modern Warfare, and isn’t as good as either.

Xcom meets Modern Warfare, and isn’t as good as either.