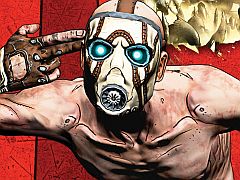 I am standing over corpses: dead Skags, Mutant Midget Psychos and Badass Bruisers. Each one killed by a unique tool of destruction. I’m talking, of course, about guns. My guns – and my guns are different to yours.

I killed the Skag – a dog-like beast with giant teeth and a gaping, Predator-esque mouth – with a BLR Static Repeater: a handgun with a scope and a chance to electrocute enemies. I killed the Mutant Midget Psycho, a gibbering, squealing dwarfish abomination, with the GGN490 Solid Sniper Rifle: a devastating long range weapon with +150 per cent critical hit damage. But I saved the best for last. I killed the Badass Bruiser, a hulking tank of a man, with the SG330 Static Shotgun: a death dealer that spews out seven shells at once, each doing 29 points of damage. Each weapon is unique. Each weapon is different. But is this what Borderlands is all about?

Borderlands is a science fiction shooter best played with friends. It’s an FPS/RPG hybrid. It’s Diablo in first-person. It’s Hellgate: London, but better. It’s Fallout 3 wearing XIII’s clothes. It’s Left 4 Dead with quests. Has that cleared it up for you?

The game begins with a choice that will be familiar to anyone who’s played a role-playing game: what class should I play? In Borderlands there are four options: Roland, the soldier, deploys turrets; Lilith, the Siren, can become invisible; Mordecai, the Hunter, uses a bird like a homing grenade; and Brick, well… Brick is a tank who likes to let his fists do the talking.

At level one you begin your journey to find the Vault, a mythical place that promises wealth, power and women. It’s hidden somewhere on the post-apocalyptic, 2000AD-inspired planet Pandora. You’re a merc, dumped from the back of a bus onto the sandy roads and guided by a Cortana-like Guardian Angel who appears out of nowhere with warm words of encouragement. This is the set-up: a simple premise devoid of complicated narrative and fluffy plot. You’re here to make your fortune in a brutal, alien Wild West.

Almost from the get-go Borderlands shows that it has taken what’s worst about MMOs – the uninspiring quests – and used them to generate 60-odd hours worth of gameplay. Voiceless NPCs dish out repetitive quests of the ‘go here and kill X/flip switch/grab item then come back for experience points’ variety. Quest text goes unread. Background info goes unabsorbed. Clear, useful map waypoints make redundant the reasons behind your rampage.

Despite slight variations, all quests have one thing in common: they involve shooting the living crap out of Pandora’s bad guys and bad things. Pandora’s inhabitants are… a tad unhinged. To be honest, they’re completely mental. From the Mad Max style goons high on psychotic love juice to the Skags, Rakk (demonic birds), insect things and creepy ghosts, the enemies almost steal the show. Borderlands is at its best when you’re shooting stuff. The controls are tight, headshots are satisfying (despite the odd collision detection issue), the weapons carry weight, and the general FPS feel is just what you’d expect from a developer with years of Brothers in Arms development under its belt.

It’s a shame, then, that it’s all too repetitive. The post-apocalyptic environments, while colourful and buoyed by the comic book art style, soon feel samey. The enemies you kill, too, despite being well-designed and perfectly in keeping with the over-the-top tone of the game, soon lose their appeal. Skags are perhaps the worst culprits of this particular crime: when you finally get to leave the opening area, after a good few hours of play, you’re more excited by the prospect of not aggro-ing any more of the bastards than by the thought of looting shiny new weapons.

Speaking of looting shiny new weapons, that’s a massive part of what makes Borderlands unique as an FPS. Diablo and Too Human fans will find much to enjoy here: the loot comes thick and fast, perhaps too fast. Almost everything drops loot of some description, be it health, cash, ammo, mods, grenades or, of course, guns. It’s everywhere – spewing out of corpses like sweets from a piñata. When new guns aren’t lying on the ground, they’re hidden in treasure chests, sporadically placed in the game world. Opening these chests is a lottery: what will I get? Fingers crossed, legs crossed, hair crossed, everything crossed – with any luck, it’ll be a purple class sniper rifle with better stats than the one I’ve just used to get here.

Frustratingly, while the addictive geek-out thrill of finding a weapon that trumps what you’ve already got is hard to resist, picking it up is a pain in the arse. You have to look down at the item, move your targeting reticule over it, then press a button. It’s incredibly fiddly, and, in certain circumstances, pointless. Take, for example, looting cash. Why do you have to manually loot cash? Why not collect it by simply walking or sprinting over it? Why would you not want more cash? So clunky is looting health that, when you’re desperately fumbling to do so during a boss fight, you sometimes get so frustrated that you want to punch yourself in the face.

MMOs are so successful because players love to show off their new epic loot to their peers. Night Elves dance outside the Ironforge auction house in World of Warcraft proudly modelling their new chest piece of doom and wide-eyed admirers send them messages of respect. In Borderlands, you have to drop the weapon on the floor to show off its stats. And that’s always a risk, because if you’re playing with a random group, some git might just nick it.

A special mention must also go to the AI. In short, it’s woeful. Enemies either rush you or stand around waiting to be shot. Occasionally they’ll run to cover – that’s about as challenging as it gets. From about level 20 onwards Mordecai, who proved to be my main character, felt overpowered as a result of his proficiency with the sniper rifle. Borderlands’ bad guys seem to have no answer to the headshot from distance.

All of these factors combine to form an uninspiring single-player experience. Played on your lonesome, Borderlands is a repetitive slog. It’s fun, but not particularly memorable or exciting. While some of the bosses are screen-filling giants, most are disappointing (one vehicle-based boss fight, about halfway through the game, is a particular letdown). The insane amount of loot adds motivation, but you soon tire of comparing what’s lying on the floor with what you’ve already got equipped. This, I’m perfectly aware, will be a loot whore’s wet dream, but for me, it’s not enough to paper over the glaring cracks in the single-player experience. Borderlands had been billed as featuring millions of different weapons. While this is technically true, you’re hard pressed to tell the difference, from a visual point of view, between one repeater and another. Sure, they feel different – during my play through the random weapon creator threw up some… how shall I put this… interesting weapons, including one rocket launcher that fired three spiralling missiles at once – but they look too similar. And given it’s nigh on impossible to show off your epic gear to other players, bragging rights don’t factor into the equation.

Played in co-op, however, the way it’s meant to be played, the way it was designed to be played, Borderlands becomes more than the sum of its parts. Like the best MMOs, playing in a four-man group with three other friends results in a unique kind of fun. In shooter land, it’s perhaps closest to Valve’s superb survival zombie-fest Left 4 Dead. And, like with Left 4 Dead, co-op automatically makes Borderlands more engaging. You get to the point where you’re bored with the environment, the enemies and the quests, and then online co-op breathes new life into the game. You forget about the problems as Borderlands’ insane fun factor kicks in, especially when you’re using voice communication with friends who are at roughly your level. The game poses more of a challenge in co-op, too – more enemies spawn from predetermined spawn points, and they’re tougher. And, accordingly, the loot is better. Put simply, Borderlands is impossible to recommend if you don’t have an internet connection (even with the inclusion of vertical two-player splitscreen), but if you do, it’s impossible not to recommend.

Borderlands doesn’t require the level of strategy of a typical MMO. Generally, skilled shooting and smart use of special powers is enough to get by. The emphasis here is clearly on fun, not the grind, nor the insanely co-ordinated boss battle, the kind of which MMO players spend hours preparing. You are not a slave to the classes – they don’t choke you into a particular play style. The Berserker doesn’t have to tank; the Hunter is more than a damage dealing machine; the Siren is better than a mere buffer; and the Soldier is more than just a healer. Each class has three trees in which skill points are added, allowing you to specialise to an impressive degree. Mordecai, for example, can specialise in pistols, making him a Gunslinger, or in sniping, making him a ranged class, or he can increase the power of Bloodwing, his devastating bird of prey pet. This is both good and bad: because all four classes can use all of the weapons, there’s not much to choose between them. Only Brick is truly different – punching the heads clean off of Midget Mutant Psychos is perhaps more fun than is healthy.

Gearbox should be praised. Borderlands is unique, it’s different, and it’s hard to classify. But it’s not for everyone. It’s not for the stereotypical CoD/Halo crowd. It’s not revolutionary, but it is interesting. And, crucially, it’s a hell of a lot of fun, but only, long term at least, in co-op. When you’re standing over the corpses of Skags, Midget Mutant Psychos and Badass Bruisers, having pounded on a heavily guarded compound with three mates, you can feel the adrenaline pumping. This, despite what they say about the guns, is what Borderlands is all about.

Gearbox should be praised. Borderlands is unique, it's different, and it's hard to classify.
8 Cool art style A loot whore's wet dream Co-op is great fun Boring single-player experience