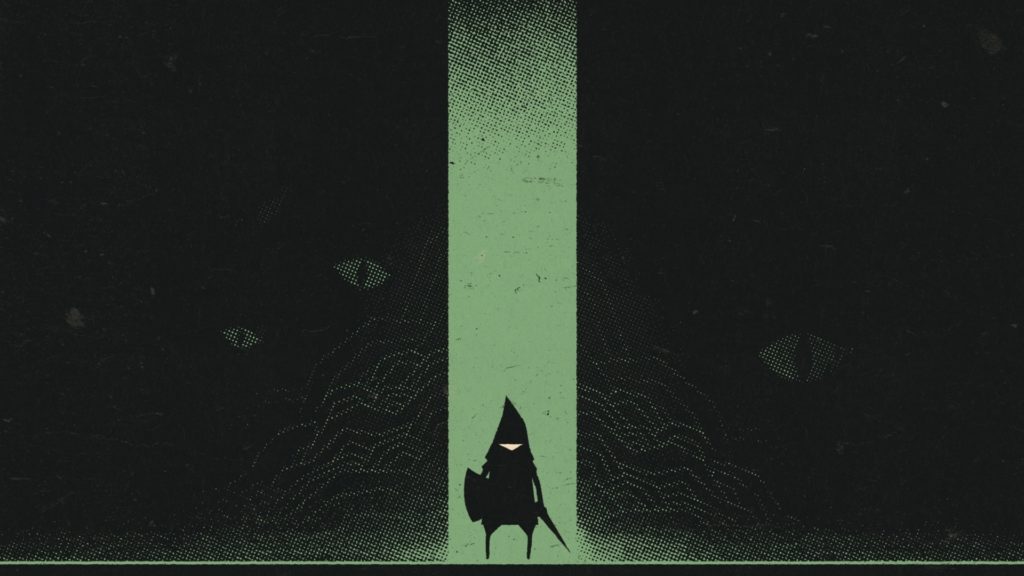 It’s called Below, and in it, you venture below. It starts slowly and from on high, as if the camera was a cloud. A lone traveller boats onto a beach, and the game begins. Within the first ten minutes, you see the sea, the sand, the grass, the cliffs, and the caves – though, you might not notice much difference between them, so enamoured is the game with the many hues of black. You’re treated to taupe, shades of charcoal and onyx, a dash of jet, and a sweet layering of licorice.

Descending into caverns filled with fog, you light braziers and cut down red-eyed shadows with swords, shields, spears, and arrows. Crafting torches and bandages from scrounged supplies, you cast light on magic runes, prizing open the puzzles of these chambers. Your journey is governed by the spite of permadeath and checkpointed with campfires. There’s a methodical satisfaction in mapping it all out, and the setting is the star of the show: the dark, empty stomach of a mountain, its base far below the waves. More’s the pity that it comes cramped with obnoxious mechanics.

For one thing, who thought having to eat and drink so damned much was a good idea? Being wrenched away from adventuring by the rumble of your stomach is as dismaying as being called in for dinner while out playing with your schoolmates on the green. These last few days I’ve pulled turnips, slaughtered and skinned foxes, and picked mushrooms; I’ve eaten enough bats to humble Ozzy Osbourne at his most coked and crazed. After all that, my hunger for exploring is all but dead. 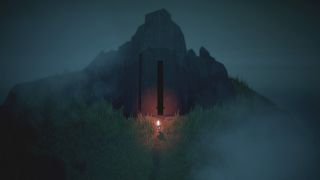 Below uses procedural generation, but, honestly, who cares? Proc-gen ironically produces the opposite of its intended effect, its randomised ‘variety’ blurring into a single, consistent image. You can produce a million variations on a dark cave, but the impression I come away with is that of a dark cave. Moreover, just as the jumble of limbs and heads and garish grass made No Man’s Sky‘s cosmos as compelling as a spreadsheet, Below’s caverns lack curation. All we are left with is mood.

With no words, plot, or characters, and an island girdled with dark water and stuck with ominous monoliths, it’s clear that Capy is concerned chiefly with atmosphere. This, I’m pleased to report, is here in abundance. The soundtrack is composed by Jim Guthrie and scored for acoustic guitar, rippling water, flickering bats, and wind, rushing through the rocks. Where the world is lit, whether by the lantern on your back or a bonfire, thin splashes of green, blue, and brown show up like bruises.

But Below is marked, more than anything else, by the bruising of time, having been in development for five years. As a rule, any mention of bonfires produces a sour wince, as if I’ve bitten into a lemon. Perhaps five years ago this might not have been the case. The world, after all, had only played one Dark Souls game. Maybe back then survival elements wouldn’t have felt so bloated, and a roguelike, whose genre is now crammed with cadavers, might have seemed fresh. 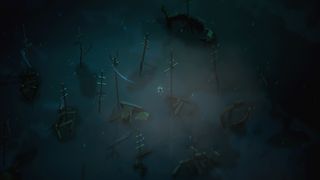 Just what is it with roguelikes? If someone makes a horror game, I presume they want to scare me. If they make an action game, they must want to excite me. But if someone makes a roguelike, what do they want? Can they tell me precisely why it’s a fantastic idea that my belongings and progress are periodically wiped away – especially when death is as capricious as it is here, arriving via spring-loaded spikes hidden in the undergrowth. Some games employ it for good reason, but in Below it seems an uninspired way to restore meaning to death in a domain where it holds little dominion.

The strange thing is that there’s fun to be had in the spelunk: the simple and satisfying combat, the gentle puzzling, and the meting out, camp by camp, of progress in the depths. It seems the piling on of what was fashionable design has only gotten in the way of its original downward-driving purpose. It’s as if they were blind, all along, to the clue in the clarity of the title. 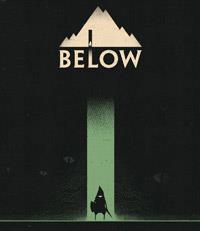 A tiny warrior explores the depths of a remote island.

A tiny warrior explores the depths of a remote island.