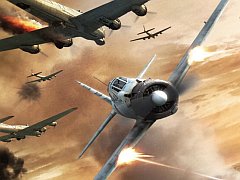 Battlestations Midway was a rather unusual hybrid of a game, a mix of real-time strategy and lightweight military simulation. It let you pilot a wide variety of aircraft, ships and submarines as part of a campaign that culminated in the pivotal Battle of Midway – one of the most important conflicts of WW2’s Pacific Theatre. Despite the odd flaw it was thoroughly enjoyable stuff, earning a respectable score of 8 in our review. And now Mrs Battlestation (Eidos Hungary) has produced an offspring, a lively chap christened Pacific.

To get straight to the heart of the matter, Battlestations Pacific is pretty much more of the same stuff we enjoyed in Midway – only this time there’s more of it. Once again there’s a hefty set of single-player missions based upon real WW2 events, but this time there are two campaigns to plough through – allowing you to play as the Japanese for the first time. If you follow this path you’ll begin by blowing seven shades out of Ben Affleck and Josh Hartnett during the attack on Pearl Harbour, progressing towards a What If? scenario that imagines what might have happened if the Americans had failed at Midway. Meanwhile the Yanks get to continue their efforts from the end of the last game, building up to the Battle of Okinawa at the end of the war.

One of our larger criticisms of the original Midway was that the game didn’t do that solid a job of guiding the player through its rather confusing array of controls and menus. There’s no mandatory training section this time around, but there is a practice mode for those who want it – and to be honest, newcomers should probably head here first before diving straight in to the action. Despite some clear concessions towards less hardcore players, the first 60 odd minutes of Pacific can be a tad confusing – our video producer Seb said that it made him want to cry, and not in the good way. The first couple of missions for either side will introduce aerial and naval combat, with submarines surfacing slightly further in to each campaign. There are simple video tutorials available at the start of each mission, with a further set of tips that can be accessed mid mission, but these work better as quick memory-joggers than as fully-fledged instructions.

Once you actually get in charge of a vehicle, you’ll find everything relatively simple. While each of the three craft classes has its own set of controls, there’s enough common ground to keep things relatively straightforward. On the Xbox 360, the left analogue stick is generally used to control your speed while the right steers you about. This arrangement may feel slightly confusing, given that most games use the left stick for navigating things, but you get used to it quickly. Planes are generally very light and easy in their handling, creating a fairly arcade-like feel, while submarines and the larger ships are slower moving and more complicated tools.

You’ll soon come to view your aircraft as your disposable scouts, but the bigger toys require care and attention. The game helpfully highlights different parts of the ships you fight, and focusing your attacks on different areas will create specific problems for your rival captains. If you attack a vessel’s engines, the victim will find themselves a sitting duck for torpedoes and other powerful but tricky-to-aim attacks; if you knock out their magazines, they’ll have a slower rate of fire. Of course, these vulnerabilities are equally applicable to your own boats. As you take damage, you can order your crew to focus on one specific problem area (fires, damage to the weapons) or to make general repairs that boost the vehicles’ overall strength. While this sounds quite complicated, these orders can be simply issued by holding a button and flicking the left stick in the direction indicated by an on-screen dial. A similar system is used for issuing orders to your co-pilots when you’re up in the sky, and it all works very well.

Indeed, Pacific as a whole can be described as a curious mix of simplicity and complexity. Simple weapons like machine guns, artillery and AA cannons have infinite ammunition, but you’ll need to flick between them as the situation demands. More complicated armaments like bombs and torpedoes have helpful on-screen guidance tools, but they’ll still require precise timing and the right approach to a target. Once you get used to these techniques, you’ll have an absolute blast with the game. There’s a fine balance of straightforward action and more advanced tactics, and because there’s a genuine difference to each of the vehicle classes, it’s highly unlikely that you’ll get bored.

Once you progress past the initial skirmishes you’ll find yourself in charge of large fleets combining destroyers, aircraft carriers, a choice of planes to launch and perhaps a few subs to boot. At this point you’ll begin to rely more fully upon the game’s strategic map screen, the side of proceedings that most closely resembles an RTS. From here you can plot the actions of your forces, complete with Dad’s Army-style movement arrows, while a simple submenu allows you to spend resources on summoning additional craft. The AI seems to do a pretty decent job of carrying out your orders, and you can jump into control of almost anything fighting on the same side as you. Before long you’ll find yourself skipping all over the place: shooting down enemy bombers in a fighter plane, switching to a destroyer so you can shell the living daylights out of a rival battleship, then jumping to a sub to scupper more boats from below. It’s a bit like spinning plates… only when you cock-up it’s not the china that breaks, but the heart of a lonely housewife back in Memphis, Tennessee.

To be honest, the strategic map screen is one of the areas in which Pacific could have done with a little more attention. As it stands it’s perfectly functional, but there are a couple of things that could have been implemented to make it a little more user friendly. The same button is used to select units and to move them, and this can sometimes be an issue when you’re ordering something to move close to another vehicle. Your view of the map is also sometimes obscured by “helpful” windows that pop up, and in general it’s pretty much essential to do a lot of zooming in and out if you want to order your troops with any degree of precision.

A greater problem is that that the game fails to fully explain how you handle non-controllable allies: you’ll often be accompanied by vehicles that can be given orders, but not directly controlled. Initially we assumed that these forces were fully handled by the AI, but this wasn’t the case. Poor Seb was messing around for about half an hour waiting for his chums to occupy an island, when in fact he had to give a direct order. There’s also no visual differentiation between friendly forces you can control and those you can’t, and this can occasionally be quite frustrating.

Other than these nags, the only major criticism to be levelled at Pacific is that the voice acting is pretty cringe-worthy. There’s no story this time, thankfully, but there’s a definite cheddar-like pong to the voice over banter. “Damn, I got another one!” cries a US pilot as he sends another man to his grave, sounding for all the world like he just opened a packet of Panini football stickers. The Japanese voices are also rather unnatural. There’s a bit too much of the boo-hiss villain to their imperialistic chatter, and every so often a voice will seem to slip back into its native American.

Visually the game is a vast improvement on its predecessor. While some of the damage animations are a bit disappointing in their lack of spectacle (torpedoes will usually just thud into a boat with a large splash), the sea looks bloody marvellous with the sun shining down on it. The various boats and planes are pretty tidy in appearance, and there are loads of them – including a few oddities like the prototype Shinden fighter, which has the propeller at the back of the aircraft. You also get to control Kamikaze craft, and as a result this is probably the first and only game in which you get an Achievement for committing suicide.

There’s no questioning the fact that Battlestations: Pacific occupies a relatively unique place in the games market, and that it probably benefits considerably from the resulting freshness. If there were more games around that were trying to do the same thing, its rough edges and occasional lack of user-friendliness might be more noticeable; as it stands, you’re far more likely to notice all the good things about it – the epic battles, the variety of gameplay and the wild thrill of slinking around in a submarine like an undersea sausage of torpedo death. There’s oodles of content here – two campaigns, masses of unlockable vehicles that can be used to alter missions, and a comprehensive multiplayer mode that offers the chance to wage epic battles with up to seven friends. In short, Pacific is very much the son of its forebear. If you’re prepared to push through its choppier moments, you’ll find a rich and highly enjoyable game that should keep you occupied for months.

If you're prepared to push through its choppier moments, you'll find a rich and highly enjoyable game that should keep you occupied for months.
8 Submarines are great Highly absorbing Masses and masses of gameplay Confusing and fiddly for beginners

Set in WWII and promises two distinct single-player campaigns: The Americans and…

Set in WWII and promises two distinct single-player campaigns: The Americans and…