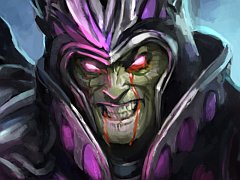 BattleForge feels like an experiment, and not just because it combines three hobby genres into one, but because the game centres around micro-transactions, an alternative revenue stream that’s as divisive as Jade Goody.

In BattleForge, a fantasy real-time strategy game at heart, your army is not made up of units determined by the race or faction you pick pre-match. Instead, you conjure units from a deck of 20 virtual cards, clicking on the card’s tooltip at the bottom of the screen then clicking on an area next to an existing unit on the battlefield for an instant spawn. There is no restriction on what cards can be used to make up your deck: any combination is possible. In this way, BattleForge is perhaps the most customisable RTS ever conceived.

Cards are based on one of four powers: frost, fire, nature and shadow. Generally, frost cards are defensive, fire cards are aggressive, nature cards are supportive and shadow cards are risky but potent. Following that, a card will be one of three types – a unit, a structure or a spell. Conjuring monuments, which are strategically dotted around each map, allows you to choose which of the four powers you want to assign it to. You can only play cards if you control a corresponding monument. So, if you assign your first monument to fire, then you’ll only be able to play fire cards.

More powerful cards require multiple monuments. You might need one fire monument and one of any other power, or, for the most powerful cards, need four monuments conjured. Because of this you’re forced to start off slowly, moving about the map with a small force that gradually increases in size as you capture more monuments.

Playing a card, as you’d expect, costs power, taken from an overall pool that increases over time depending on the number of power nodes you control. Again, the most powerful units require more power. The Juggernaut, for example, requires loads of power to conjure. Even its special ability, a structure destroying stampede, requires as much power as it would to conjure a small unit.

So, while there are no restrictions on the units in your deck, the game forces you to think strategically about what’s in it. You’ll want a healthy number of low cost units that can be conjured with only one associated monument, in order to guarantee strength early in a match and facilitate quick reinforcements. You’ll also want a healthy mix of power types so you’re able to adapt when things get tough. And, of course, you’ll want one or two uber units, just for fun.

It’s a slightly odd, and initially bewildering, set-up. The game plays in a breezy fashion, partly because of the cartooney, almost Warcraft III-esque fantasy art style, but it’s mostly down to how liberal the game is with conjuring: you’re able to capture monuments and power generators as long as one unit is near them and the area is clear of enemy units, and you can conjure a unit next to any exiting unit anywhere on the battlefield. So, simply spamming the enemy with units as soon as your power allows forms much of the gameplay.

BattleForge could be considered trading card game Magic the Gathering in video game form, but that doesn’t tell the whole story. Unlike other RTS games on the market, BattleForge is playable only in a persistent, MMO-esque world, where players work together to defeat “bosses” and terms like “crowd-control”, “aggro” and “loot drops” are as applicable as “micro-management” and “resource gathering”. Indeed since your virtual deck is saved online, an internet connection is required to play the game.

The game starts to feel more like “MMO dungeon running” when you play it co-operatively. One player might be on crowd control, for example, keeping mobs at bay, while another player tanks the boss. Then another player might be healing, with another nuking with powerful spells. Once you start to unravel BattleForge’s poorly designed interface, it starts to get under your skin in the same way that regularly raiding dungeons in MMOs for loot does. The cards you win once the big boss is downed motivates everything you do.

The game world contains 31 scenarios – 19 PvE and 12 PvP, although developer EA Phenomic promises more will be added. They’re of various sizes, fitting for one player to go solo or for two, four or even 12-players to work together against the computer. Then there’s the PvP side of things, which is where BattleForge gets particularly hardcore and you’re likely to get your arse handed to you on a platter by a German in a matter of seconds.

It’s the micro-transactions that sharpens BattleForge’s divisive edge. You’re able to buy cards from other players via the poorly-designed auction house, or in virtual booster packs (the eight cards in a booster pack are made up of five common, two uncommon, and one rare or ultra-rare cards). The in-game currency, called BattleForge Points, are purchased with real world money: 500BP costs £3.99. A booster pack costs 250BP, or a couple of quid.

There are concerns that being able to buy cards and in turn expand the number of cards you can build your deck from ruins the balance of the game. This, in theory, rewards the rich and hand ties the poor. Right now this argument isn’t as compelling as it will be when EA releases new cards. The retail package, which costs £35, comes with 16-card, themed decks for each of the game’s four powers, and 3000BP, which affords you 12 Booster Packs, or 96 extra cards. After all is said and done, the game comes with 160 cards, 64 from the standard decks and 96 from the booster packs. There are 200 different cards available right now.

When EA releases more cards though, the balance issue will rear its ugly head and then it will be impossible to ignore. Put simply, if you want to compete in BattleForge’s online PvP ranking, you’re going to need to spend hard-earned cash on cards, either in the auction house or from booster packs.

Micro-transactions, however, aren’t BattleForge’s biggest problem, the actual gameplay is. While card collecting is compelling, and fussing over your deck is fun, the game suffers from a lack of oomph that makes it a tad boring. Too often battles descend into unit spamming – you build up a force, assault a powerful monster, die, rinse and repeat until its health points are extinguished. The story is some poorly told nonsense about Skylords saving the earth from some evil. The graphics are vibrant and easy on the eye, but the unit animations are uninspiring and the environments start to grate after a while. The PvE maps offer solid, if repetitive fun, but it’s still a somewhat hardcore, inaccessible experience that’s poorly explained: there sheer amount of cards is bewildering, and you’re never sure what each one is good for.

Still, there’s fun to be had, but only if you’re playing the game with friends, since playing with strangers more often than not results in a similar feeling of frustration experienced in pick up groups in MMORPGs. The 12-player maps are cleverly divided into sub-maps, putting groups of players into separate areas that impact on the overall challenge in real-time. BattleForge is at its best when everyone’s on the same page – the sense of satisfaction at a downed boss can be immense, and getting a card you’ve never seen before pushes all those geek buttons. You’ll have your own opinion on the micro-transactions, of course, but the controversy surrounding them diverts attention from the fact that BattleForge isn’t as spectacular an experience as it could have been. It’s an experiment that was definitely worth the effort, and lessons will be learned, but as a game there are fundamental flaws too pertinent to ignore.

It's an experiment that was definitely worth the effort, and lessons will be learned, but as a game there are fundamental flaws too pertinent to ignore.
7 Breezy, vibrant art style Deck building and card collecting is fun Micro-transactions divisive Lack of oomph