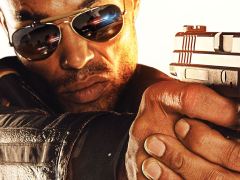 With episodic, Netflix-style presentation and a roster of D-list Hollywood actors, Battlefield Hardline desperately wants to be a ‘cool’ cop show. But despite Visceral’s attempt to tell an entertaining (and outlandish) story wrapped up within that framework – and the studio’s previous experience in telling single-player narratives – Hardline manages to be the worst campaign in the entire series. It also has the dubious distinction of being a Battlefield game where the multiplayer is only really enjoyable when it seeks to resemble something other than its parent franchise.

The campaign gets off to a promising start with the introduction of some interesting mechanics. In each encounter you’re given the choice to go in all guns blazing, or instead play good cop and sneak through the crowd, pulling out your badge to ‘freeze’ enemies on the spot before making an arrest. The minimap displays enemy vision cones, which allow you to move between groups effectively to avoid detection before slapping on the cuffs.

The arrest mechanic works well initially because of the impact it has on you as a player and the experience you choose to carve through Hardline. Here’s a first-person shooter that isn’t primarily a first-person shooter, but a game ideally designed to be played with something other than lethal force as your first and only priority. Indeed, Hardline can often feel less like a Battlefield game and more of a new stealth IP built on the Battlefield engine.

The game’s progression system rewards good behaviour, offering new gear for making arrests and disabling alarms. Every time you play this way you’ll earn experience towards your ‘Expert’ level: good in theory, but in practice is borders on the ridiculous. Each rank unlocks new items that feel completely incongruous to the narrative. How many Miami PD cops need to unlock new SMGs and assault rifles? And rather than unlocking new weapons for not shooting people, why isn’t the player rewarded with faster arrests, more time to arrest criminals before having a gun pulled on them, or more tactical, non-lethal gear, like flashbangs? (As an aside, you’re never given access to grenades or their equivalent throughout the campaign).

The unlock system doesn’t make sense, especially when you discover that two of the unlockable perks are ammo and health packs – the same as those found in multiplayer – which you can drop for your AI partners, who never require either.

Throughout each chapter there’s also other cases to solve in the form of collectibles. Similar to the Detective Mode in Rocksteady’s Arkham games, Mendoza’s phone can be used to scan for pieces of evidence. But because the player doesn’t get to investigate the cases to any great extent – they’re just items dotted around the game world waiting to be stumbled upon – they’ll likely fail to grab the attention of anyone other than completionists.

The campaign really falls apart, though, when you end up as a fugitive on the other side of the law, and when the context of the arrest mechanics go completely out the window – along with the plot. As a cop, I was choosing to make non-lethal takedowns and arrests. As a fugitive you can still do this by telling enemies to freeze instead of flashing the badge. But why am I arresting them? And why are they listening? I’m more of a wanted man than these low-level thugs. Why not change the animation so that I knock these crooks out with my gun? And why are these heavily-armed security personnel willingly laying down their arms to a pistol-wielding fugitive on the run? Non-lethal takedowns suddenly make no sense and lack any validation. That entire inner-thought process of not killing anyone goes out the window, and we’re back to the Wild West of shooting anything that moves.

The plot also pretzels itself with such a torrent of cliched twists and turns that it becomes laughable. Characters go from good to bad and back again within the space of a few minutes (one character finds a way to screw you over in three consecutive episodes, and you always see it coming). While avoiding spoilers, the rapid collapse into farcical storytelling, as Visceral shies away from telling anything close to a meaningful narrative, is almost shocking. There’s a QTE with an alligator – ludicrous in itself – but there are far sillier moments, with the game eventually descending into absurd Bond villain territory rather than telling a hard-nosed tale of corrupt cops. The Shield this is not.

Rather than gradually evolve both plot and gameplay across the game’s ten chapters, Visceral chooses to do nothing with either, failing to take risks and presenting a forgettable, immature experience rather than one worth talking about. The mechanics introduced in the opening episode fail to develop or remain compelling, while the nonsensical 6-hour story comes as a major disappointment considering Visceral’s promise to create an interesting Battlefield campaign.

Multiplayer is certainly more enjoyable, but often falls between two stools. When Hardline isn’t trying to be a Battlefield game, it works well. The smaller matches, without vehicles and on maps that offer plenty of buildings to run into and traverse, create some great moments.

In contrast the larger scale modes, like Conquest and Heist, feel too anarchic to create consistently enjoyable matches. With so many characters running around at once, the open landscapes leave too many players vulnerable at once, and running between buildings is luck of the draw whether or not you’re going to be caught in the crossfire.

They also go on for far too long, lasting about 20-25 minutes each, becoming boring and a chore to finish. Equally, the larger maps – which are mainly flat land, without anywhere for players to hide and lacking verticality – are boring affairs without much imagination in design. The Everglades map is a particular low point, with hardly any buildings to move through, leaving far too much open space for players to be spotted in.

The main problem is with the game’s vehicles. Because heavy weapons, like LMGs and rocket launchers, are now only found in the map itself and cannot be equipped through character menus, taking out enemies on four wheels or in the air can be a near-impossible task while on foot. This makes choppers, armed with giant chainguns able to rain down fire on anything and everything, incredibly difficult to deal with. It also makes Hotwire an incredibly frustrating mode to play.

In Hotwire, players must take control of five cars, and drive them over a certain speed in order to earn points (think Conquest on wheels). The vehicles, which can range from motorbikes to patrol cars to SUVs, have the structural integrity of tanks. Hitting them with grenade launchers isn’t enough to take them out, and if you’re not in a car yourself (with at least one other person riding shotgun), the mode is terribly boring.

Another issue is the horrific spawn points. Players on both sides will spawn a mere few metres away from each other within seconds, leading to near instantaneous deaths. It’s fun when you get a quick kill after landing in the map, but infuriating when you die before barely putting one foot in front of the other.

Battlefield Hardline could have been something unique, a chance for Visceral to place its own stamp on a long-standing franchise and potentially even offer a chance for real discussion by presenting a thought-provoking cop storyline. What we instead get is a laughably-shambolic campaign and multiplayer that is merely serviceable and too timid to step out of Battlefield 4’s shadow. For those looking for Training Day or Bad Boys the game, this isn’t it.

Buy Battlefield Hardline now and have it delivered tomorrow.

Hardline doesn’t sufficiently evolve interesting mechanics in the terrible single-player and is only saved by an at times enjoyable multiplayer component.
6 Multiplayer can be fun. Multiplayer modes hampered by vehicles. Campaign is laughably bad. Cops and Robbers aspect doesn’t stand out enough.

A cops and criminals spin-off in the Battlefield franchise.

A cops and criminals spin-off in the Battlefield franchise.