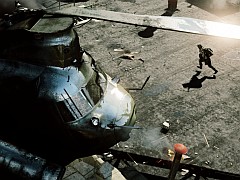 In all the hubbub about Premium subscriptions, week-long exclusivities and internet-fuelled EA bashing, it’s easy to forget there’s an actual expansion pack out for Battlefield 3. And with over 15 million players having shot-and-spot their way through the game last October, that’s a hell of a lot of people who care far more about these new maps and modes than any other bluster.

What exactly do you get in exchange for the first chunk of your Premium payment? Well, you get four new maps (namely Ziba Tower, Donya Fortress, Operation 925 and Scrapmetal), two new gametypes (Close Quarters Domination and Gun Master) and a slew of new weapons and assignments. But unlike other map packs, Close Quarters isn’t just a collection of rooms and corridors; it’s a fundamentally new way of playing the game. In many ways, Close Quarters isn’t even Battlefield at all.

DICE hasn’t ever suggested otherwise, of course. Even the name demonstrates a different focus, a step away from the dynamic open skirmishes of Noshahr Canals or Caspian Border and towards something else. Something familiar. Something like Call of Duty, in fact. At a base level, from the very construction of the maps to the minutiae of the new modes, this is Battlefield’s answer to that other game, almost like a thank you letter to its fans for not staying blue and not going over to Modern Warfare 3. And in that respect, it’s largely successful.

It’s important to stress one fact – Battlefield 3’s signature modes, Rush and Conquest, are not available here. Close Quarters is its own beast and must be played its own way. The new mode du jour is Conquest Domination, itself a facsimile of Call of Duty’s own flag battling Domination albeit with speedier capture times. Each map contains three stationary flags in key areas, and teams battle it out to secure and hold each point. The more flags you have, the faster you’ll drain opposition spawn tickets.

This isn’t drastically different to vanilla Conquest, of course, but the flow is completely different. Points are captured extremely quickly, meaning there’s a constant to-and-fro to the action rather than drawn-out battles over each point. It’s a game about moving in a pack, focusing on the lines between flags and ensuring your team always has a 2-to-1 advantage.

As all four maps have been built specifically for this mode, their similar qualities are all completely different to any other kind of Battlefield map. They all operate with a consistent flow, placing one flag in a large-open area, and two in confined spaces. The key to victory is maintaining control of that open-area flag, while ensuring at least one of the others is in your control.

Ziba Tower is probably the most immediate of the four maps, with long lines of sight, a Mirror’s Edge-style colour scheme and a very obvious flow between flags. Hanging out in the courtyard at the bottom is chaos, while battles for point A are grenade-heavy melee brawls. Control of point B is paramount, though, as it’s directly overlooked by a rectangular balcony and approachable from innumerable positions.

But Ziba Tower is also the most forgettable of the quartet, as tactics soon become predictable and the same skirmishes repeat themselves in every game. However, it does do a fantastic job of showing off what DICE’s marketing team is calling HD Destruction. Glass shatters, lights pop, walls crumble and ceilings cave – it’s largely cosmetic damage when compared to the main game’s tower-felling madness, but it sure does look pretty.

More interesting is Operation 925, which at first glance looks identical to Ziba Tower, but soon reveals a huge underground car park where point B is hiding tantalisingly out of the way. The subterranean gloom makes for some spectacular firefights, and every footstep is doubly terrifying as you bolt from stairwell to stairwell looking to get back upstairs.

Back on the surface, Operation 925 is actually not dissimilar to Modern Warfare 2’s infamous Terminal map, with curved corners and small intersecting rooms. DICE has taken to this kind of circular map-making like professionals, and Operation 925 offers plenty of scope for tactical play, even if Close Quarters’ relentless action doesn’t really leave much room for thought or reason.

The third map, Donya Fortress, also features a tucked-away mid-level tunnel that transforms into a killing field when both team collide therein. And of course, that’s where its point B happens to reside.

Donya Fortress is also familiar to many Call of Duty maps, and it’s perfectly serviceable if a little unremarkable. Point A sits at the top of the map, on a tiny balcony, letting Support-class campers have a bit of fun with the scurrying masses below before someone inevitably knifes them in the back. And point C is another chaotic mess, with multi-tiered vantage points to contend with alongside plenty of routes in and out. Spawning there without proper scouting is a good way to ruin your K/D ratio. Not that these things matter (they really do).

The pick of the bunch, then, ironically has the worst name. Scrapmetal is a multi-storey tower of twists, turns and traps, covered by a sizeable open-rooftop and home of the most tactically varied Close Quarters matches I’ve enjoyed so far. It’s the toughest one to get to grips with, too, but it only takes a few games to reveal multiple routes through each floor, with intersecting loops between the flags and even a couple of cheeky choke points to avoid (or relish, depending on your mood).

All four maps are playable in Team Deathmatch, too, and it’s just as unfruitful here as in the main game. The only other mode to get interested in is Gun Master, the weapon-swapping son of Counter-Strike and Black Ops’ Gun Game.

If you’ve played either of those, you know what you’re doing. Everyone starts with pistols, and after two kills (apart from the M320 and knife) upgrades to a better weapon. This continues through assault rifles, shotties, LMGs and grenade launchers until level 17, where the winner must slay someone with a knife to come out on top.

Two things hold Gun Master mode back, though. Firstly, the gun variety isn’t exactly memorable. There’s nothing as enjoyable as the crossbow or telescopic knife from Black Ops, so it’s better to think of your progression as a taster course for all the new guns in the game (with the SPAS Shotgun and AUG assault rifle proving personal favourites).

Secondly, and more importantly, I cannot fathom why Gun Master is a team game. It makes no sense to me. There is no squad spawning, no classes and no team-buffing, so why you have team mates is completely baffling. It actually makes things trickier, too, as while these maps are small for Battlefield, they’re still easily big enough to make locating the enemy tricky if you find yourself away from the action.

I guess the biggest problem with Close Quarters, though, is in its longevity. There’s no doubt DICE has done sterling work in creating a Call of Duty-esque offshoot within its already sparkling world of violence and explosions, and in doing so has really shown off just how good the gun-on-gun combat in Battlefield 3 actually is. But it’s just not Battlefield, and after a few weeks – days, even – I’m convinced the hardcore will go back to the main game and the unscripted drama therein.

As good as Close Quarters is, then, it just doesn’t have the tools to offer up anything so profound at Battlefield 3 proper. Where are the war stories – the incredible emergent drama where you’re completely enraptured by the moment and living out these boy-soldier fantasies? There’s a reason that these 15 million people aren’t playing Call of Duty. For all its triumphs, Activision’s behemoth just isn’t Battlefield. And while a fine effort, nor is this.

Close Quarters just doesn't have the tools to offer up anything so profound at Battlefield 3 proper.
7 Immaculate CoD-style map design Close Quarters Domination is fast, furious and fun Gun Master's team focus makes no sense It's just not Battlefield