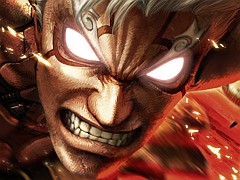 Rarely in games do you experience such a dramatic turnaround. A couple of levels, or episodes as they’re known, into Capcom and CyberConnect2’s Asura’s Wrath, and things are not looking good at all. “What is this nonsense?” I uttered to myself with a look of contempt and mild disgust on my face. Cutscenes, QTEs and some on-rails shooting, with endless talking about absolutely nothing and a gameplay-to-bollocks ratio of approximately 1:infinity.

Then, for some reason – call it inspiration, call it despair – I glanced at the options screen to see if the original Japanese language track was available. It was! Suddenly, this cloying Final Fantasy vomit-fest now sounded like a Kurosawa flick and looked increasingly like an episode of Dragon Ball Z animated with the thick black edges of Street Fighter IV. Fast forward 8 or so hours, and I’ve ended up delighted. So what the hell happened?

Understand one thing: Asura’s Wrath is a game like no other. In many ways it’s barely a game at all. Cyber Connect 2 has built an interactive anime, one where huge sections are literally unplayable and others only ask for the bare minimum of QTE inputs. You play as Asura, an extraordinarily angry demigod plucked from the footnotes of Hindu texts and filtered through a touch of Shinto, a smattering of Buddhism and a great dollop of modern day Japanese crazy. Early on in this bonkers tale of revenge and regret, he’s banished from the story’s equivalent of heaven, his wife is killed and his daughter captured. When he wakes up from his fall (he’s literally cast out), understandably he’s a little peeved. So, naturally, it’s time to find the seven demigods who betrayed him and have stern (violent) words with them. It just so happens that 12,000 years have passed in the meantime.

The other thing to understand about Asura’s Wrath is that it’s absolutely, unequivocally insane. This is a game where the first boss is at least twice the size of the planet. It’s a game where you fight a Vega-cum-cowboy in the desert while you happen to have no arms, to the sounds of a Sergio Leone-alike rock remix. Later, you have to get drunk on Sake while the Hovis music plays in the background. If ever a game wasn’t a title designed by focus groups and marketing men…

It takes a couple of hours to uncover it, but there’s actually a game hiding in here too, and it’s a pretty good one. So good, in fact, that all that non-gamey stuff starts to become a hell of a lot more fun once it pops up. When you’re not having your eyeballs torn out by some of the most incredible scenes of unfathomable madness ever put on screen, chances are you’ll be smacking seven shades of Shinto out of the Gohma, the red-tinged ancient enemy of the people of Gaea. They range from grumpy gorillas to angry elephants, with rhinos, giant turtles and some truly enormous stuff I won’t dare spoil in between. Hitting them is easy enough – Asura’s pretty good at hitting things, if you hadn’t already guessed – with one button delivering a heavy strike with a cooldown timer. There’s also a dodge and a lock-on, and you can counter when on-screen prompts demand it.

Every one of these battles, or indeed any scrap in Asura’s Wrath, have a singular goal – getting old spiky head so angry that he flips out and unleashes galaxy-rippling levels of violence on anyone who dares glance in his direction. There’s a red bar at the top of the screen, and the more damage you inflict, the quicker it fills up. Max it out, and a flaming right trigger and the word BURST pop-up on screen . Tug that sucker like you mean it and await the colossal asswhoopin’ that always follows.

It’s important to really convey just how seismic Asura’s beatdowns are. This is a guy who can kill a god with a headbutt, or punch his way out of a demonic fish that’s the size of America. You see, while Asura’s Wrath is hardly the most serious game in the world, it’s a surprisingly clever one. Every molecule of its design ties back into the idea of his undying, unquenchable anger, from the impeccable sound design making every strike sound like a thunderclap from Thor himself to the immaculate timing of the QTE inputs – every blow, every explosion, even every beating you take… you can feel it. The struggle to fill the Wrath bar, be it through relentless Ghoma pounding, QTE button mashing or even the on-rails shooting sections (which pay homage to Rez, of all things), is exactly that – a struggle – and the release when you finally do burst is so cathartic you’ll be tempted to tear your shirt in half like Hulk Hogan and let out a guttural roar.

For all the ridiculousness, Asura’s Wrath’s narrative works because it’s a human story, one about a man seeking vengeance for his family. For every continent-sized explosion, there’s a touching unspoken moment between well-written characters. Asura’s motivations are always clear and always compelling, and even though the game is cutscene heavy its storytelling rarely feels laboured. Instead it’s snappily paced, funny, sharp and unexpectedly easy to follow.

Special mention must go to the static storyboards that fill the gaps between episodes (of which there are 18 in total – the game plays out like a DVD boxset, with cliffhangers and credit sequences). Not only do they look fantastic, the accompanying text toys with the story in ways other games just don’t do – different perspectives, false narration and even historical eulogies. And while pinning down a direct inspiration is tough given the game’s pick n mix approach to different religions and mythologies, there are clear and sombre nods to Japan’s own 20th century nuclear history – the threat is always from above, and when it comes, it’s merciless.

Amidst all this praise, though, it’s key to remember that earlier point – at times, Asura’s Wrath is barely a game. The curious combination won me over, despite generally despising QTEs and boasting a short fuse for hammy cutscenes. Regardless, this is a short game, and only a third of it is actually playable. That’s going to be enough to deter many. It’s made the thing bloody tough to score, and Capcom’s effort is sure to polarise opinion in a way few games ever manage. While I wrestled with my own opinion throughout the playthrough, though, one sentence kept spinning around in my head: you’ve got to play Asura’s Wrath.

Good or bad, game or no game, you’ve just got to play Asura’s Wrath. And, in truth, that probably says it all.

Good or bad, game or no game, you've just got to play Asura's Wrath. And, in truth, that probably says it all.
8 Oddly involving and brilliantly paced Amazing, unique spectacle Combat is shallow Barely interactive for large chunks