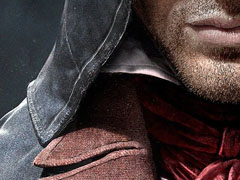 Sometimes you have to look back before you move forward.

Unity may have the intention of being Assassin’s Creed’s next-gen reinvention, but it’s remarkably faithful to its roots. Casting aside the various bells and whistles which have crept into the format over the years, including naval combat and recruitment mini-games (with the latter being relegated to the companion app), Unity keeps a laser-focus on its chief star – the glorious city of revolutionary Paris.

Like Florence before it, ACU’s Paris is a beautiful mess of conspiracy, filth-caked streets and incredible rooftop panoramas, and it’s huge, sporting a vastness and density that pushes the hardware it runs on a bit too hard. Its streets are packed with citizens who shop and thieve and fight amongst themselves. The air is filled with bustle, anger, and the infectious song-singing of a people desperate to take control of their destiny. It’s deeply impressive, and a joy to explore.

A smashing backdrop, then, for a story about a man who stabs other men.

Our stabatar this time round is Arno Dorian, who is sort of a French Ezio, right down to a comparable origin story and similarly cheeky demeanor. The series has so far struggled to replace the beloved Florentine, and Arno is its best attempt yet. He’s not quite as fun, not quite a dashing, not quite as cool, but he’s a damn sight closer than, say, AC3’s Connor Kenway. And rather unlike Connor, Arno isn’t quite so involved with the revolution gripping his country. Indeed, it’s largely ambiguous as to which side the Assassins are actually on.

You’d be forgiven for assuming that in depicting the French Revolution, Assassin’s Creed would take the same Forrest Gump-with-swords approach as it took with the American one, and you might expect to end up chopping Louis XVI’s head off by yourself, after single-handedly storming the Bastille and declaring war on Austria.

However, thankfully, things are a bit more sensible this time. Arno’s story intertwines with the events and personalities of the revolution, but in a much more passive and believable way. Arno lives through the revolution without becoming one of its key figures; it’s refreshingly restrained for a franchise which once tasked the player with throwing boxes of tea into Boston Harbour.

His story is, as ever, the ‘main’ one, and it’s a fair old romp. It takes a few hours to get going, and suffers from the Assassin’s Trope of having multiple prologues, but quickly starts to batter along at a ridiculous pace, losing some cohesion in the process and finishing with a startling lack of ceremony.

The plot, which includes a very stripped-down modern day portion, continues the series’ tradition of being dafter than what would result if you locked JJ Abrams in a room full of typewriters and flooded it with nitrous oxide. It does its job, though, and each chapter culminates in a takedown mission that gives the player an unprecedented amount of planning freedom. Assassinations usually occur in wide open spaces, and contain a number of useful side objectives which unlock multiple routes and solutions.

The campaign alone is worth your livres, just, but it represents a mere fraction of the story content on offer. It won’t surprise anyone to know that the objective markers on the world map are so abundant that they almost blot it out completely. Honestly, there four different types of treasure chest, collectible cockades (this year’s feathers), and an insane amount of story missions.

You’ve got your Paris Stories, which are little narrative vignettes that are surprisingly broad in their objectives – most will have you find and kill someone, but not always, and the contexts vary as often as the structure. Elsewhere, there are murders to solve, where the game turns into a Sherlock Holmes-lite affair involving eagle-vision hunts for clues, interviewing witnesses or suspects (who never bother to ask just who the bloody hell you are), and reviewing case files. It’s possible to finger the wrong culprit, and you’ll be punished for doing so.

They’re not exactly procedural masterpieces, and there’s an obvious absurdity to bringing killers to justice while being the most prolific murderer in Paris, but they are nice distractions from the melodrama of Brotherhood business and come with a welcome dose of humour to vary the flavour of the game.

Base upgrades make a sort-of return in the form of a social club which Arno can renovate and turn into a city-wide franchise, bringing in a regular income and unlocking even more missions. Upgrading coffee shops isn’t quite as exciting as fitting guns to a warship, alas.

The side-stories serve to flesh out this digital Paris, telling tales of its people and going some way to making it feel less like a simulation within a simulation and more like a place where folks actually live. They also make it huge and daunting. It’s a lot of stuff to get through, and thankfully, most of it is worth the time.

There’s just so much to do, it’s almost exhausting. It’s challenging too. Combat has been overhauled, removing the counter-kill crutch and encouraging players to use the full moveset. Fights now require more skill than jabbing a button when you see the ‘imma hit you’ prompt, and in the early stages especially, running away is preferable to duking it out with a mob.

Unfortunately, this new Assassin’s Creed has inherited some old problems. The control system, tweaked to allow for controlled descent, still isn’t as fluid as it should be. You’ll still find yourself stopping dead on a handhold, with Arno refusing to go anywhere. You’ll still be stopped in your tracks by bits of scenery, gnawing at your controller as Arno elects to gently rub against an object instead of vaulting over it. Mistakes result in plunging to your death a lot less often than before, though, and at least there’s now a crouch button, although how much difference it actually makes to your detectability is highly debatable.

Unity is plagued with performance issues too, which sadly blight an otherwise top-class product. The framerate is atrocious in places, and at best is merely acceptable. The sweeping camera moves triggered by synchronisations, those ‘wow’ moments that have been synonymous with the series since it debuted all those years ago, betray just how taxing Unity is on its target hardware by failing to render smoothly any time they occur.

The streets of Paris are stuffed with NPCs to an extent that makes the previous games look deserted, but that stuffing comes with the cost of glacial screen updates, controller lag and immersion-smashing pop-in. While the transition between interior and exterior is usually seamless, the loading times when they occur are frustratingly long.

These issues are hard to ignore, and put a dampener on the suggestion that next-gen begins with Unity, which was always going to raise skeptical eyebrows. However, they don’t ruin the experience by any means – in fact, dare I say it, this is the best entry since Brotherhood. For the most part, Ubisoft have really pulled it out of the bag. Unity confidently rolls the series back to its core concepts, and fulfils much of the promise that was evident, but rarely lived up to, back when we were living through the crusades as Altair.

It’s a good time to be an Assassin’s Creed fan. I just wish my console could run it properly.

The co-op portion of the game, far from being an afterthought, receives a great deal of attention.

Up to four players can take part in a brilliantly eclectic selection of missions. There are two distinct types – heists, which are stealth focused burglaries in which the size of your reward is tied to how often your team is detected, and story missions which complement the main campaign and are presented in a similar style, complete with framing cutscenes and multiple stages. Best played with pals rather than randoms, successful co-op sessions require planning and coordination and, with the right people, can be the best part of the entire game. In fact, co-operative play fits the series so well that the fact it took seven games to show up beggars belief.

Some of Arno’s unlockable skills are exclusively for co-op – a party-wide eagle vision allows one player to share the positions of detected loot and enemies, and certain equipable items increase the speed with which you can revive downed comrades. The variety of weapons and armour on offer allow you to carve yourself into certain specialisations. Team members who want to be the tank can do so by beefing up their health stat and getting themselves a good heavy weapon, while others might want to polish up their stealth stats and lock picking skills. There are no distinct classes, but there are plenty of options.

A good team will know each other’s strengths and weaknesses, and strategise accordingly. Indeed, the game encourages this through its Social Club system. With a dedicated band of assassins, you can take part in group challenges and earn rewards for your whole group.

Some will lament the discarding of Assassin’s Creed’s well-received PvP, but this is a fine trade-off. It’s an essential part of Unity’s package, and well worth the trouble of putting together a posse for.

VideoGamer attended a review event in Paris. Accommodation, travel and food was paid for by Ubisoft. The game was played on Xbox One.

On return to the UK, the game was tested on retail PS4 and Xbox One code with the ‘Day One’ patch downloaded. Co-op play was tested on PS4 on live servers.

Unity may have the intention of being Assassin’s Creed’s next-gen reinvention, but it’s remarkably faithful to its roots.
8 Co-op is a great addition An incredible virtual city Insane amount of mission content Performance issues and glitches tarnish the experience