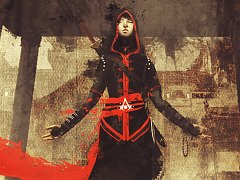 Assassin’s Creed Chronicles: China is at its best when you’re moving quickly, sliding under enemies before slicing them to death with one slash of your katana, jumping from platform to platform, post to post as you attempt to outrun the fire consuming the city behind you. Annoyingly, this thrilling, high-octane gameplay isn’t the focus; instead the majority of ACC China is a much more sedate stealth-platformer that constantly offers you additional abilities but never feels like it’s doing anything new.

Vision cones are the name of the game, with every enemy sporting one. This white beam shows where each foe can see, turning yellow once they spot you and red if they become fully alert to your presence. This mechanic is played around with at times, with your movements on certain flooring alerting them if you’re heavy footed, and other bad guys equipped with an awareness sphere that will detect you unless you’re crouching.

Essentially you have to move around the enemies without them spotting you, or else you’ll trigger combat and potentially have to face a wave of reinforcements too. Locations within the 2D levels (although there are often numerous planes to each stage and some depth to movement within each of those) are there to help you out, so you can hide in a bush, on the outside of a window ledge, or inside a handily placed door. Eventually you can use a special ability to leap between cover points without being spotted even if guards are in plain sight – which feels a little like cheating but is quite cool.

Stealth is handled well, and I never found myself feeling like I’d been cheated – even if it makes little sense for a patrolling foe’s completely unobstructed vision to stop inches from your unhidden location. It’s a gameplay mechanic and I’d rather it worked without confusion (as it does) than make perfect, logical real-world sense. The problem is that stealth rarely feels clever (diversions created by your tools being the solution to most areas) and never comes close to the excitement generated by the faster-paced escape sequences.

That leaves the combat, which you’re often forced into when you make a mistake and enemies think you’re playing hide and seek, yanking you out of cover to give you a kicking. Blocking and countering are the key mechanics, just as they are in the mainline Assassin’s Creed titles, but it doesn’t feel quite as tight here. There’s the odd moment when you can use the environment to take down an enemy, but the act of firing off a blade is so finickity that I generally opted for the more simple direct approach.

The result is a game that is neither as much fun in stealth as Mark of the Ninja, and not as exciting to leap about in as many of the Prince of Persia games. Ubisoft’s last proper PoP game, The Forgotten Sands, might not have been as spectacular as the glorious 2009 cel-shaded effort, but it had some really interesting platforming sequences and abilities.

With an art style based on Chinese watercolour, ACC China certainly has a striking appearance even if it’s not technically brilliant. The use of watercolour is nice, but very little is done to make the levels anything more than functional. Not once did I want to admire the view. It’s far from the gorgeous game Unity is and seems happy to be adequate – a real shame considering the series is known for its ‘wow’ moments. It doesn’t help that the story is so limp and forgettable. Set in 1526 as the Ming dynasty is starting to fall, no doubt fans of the series would have liked to see more than some conversations about a mystery box – or maybe that’s exactly the kind of thing they expect.

Finish the game and chances are you’ll have a lot you haven’t done. Each level has optional objectives which earn you bonus points, in turn unlocking upgrades. These side quests of sorts are generally of the “save” or “kill” variety, offering more of the same and as such weren’t a priority on my first play through. A new game plus option (and a harder version that reduces your health bar) opens after the credits, meaning you can replay the game with all earned upgrades and abilities, and tackle some of those missed missions.

Assassin’s Creed Chronicles: China feels like an Assassin’s Creed game without the sense of adventure and scope, and a Prince of Persia game without the cool platforming and exciting combat. That combination doesn’t make for a bad game, with the brief campaign offering some entertainment, but it’s difficult to get overly excited about. With two more games in the Chronicles series to come, each will have to offer something substantially different or boredom will set in very soon.