We don’t get a lot of new IP from Nintendo; granted, they have a cast of exclusive characters that other companies could only dream of. But, that’s why people always get excited about something new from video games’ constant — a new idea, a new style, a new intellectual property. And that makes sense; they knock it out of the park a lot of the time.

Arms is something new, something different, something almost hard to nail down. It’s a strange beast; one which feels like it never goes the whole way in either direction. It’s an over-the-shoulder shooter masquerading as a fighting game, without the sensibilities of one from modern day. There’s an element of strategy involved in a one-on-one battle, but it’s not like your tactical nous will be massively stretched, either. As long as you grab the blocks, block the punches, and punch the grabs, you’ll do just fine, for the most part.

In its purest form, Arms involves you picking one of the ten available characters that have superhuman limbs that extend across the battlefield, and aiming to down another of the roster. Deal damage by slapping the taste out of their mouth with a well-timed hook, or throw them through the air, watching as they come crashing back down to earth. Defensively, you can dash left or right, and bring your fists toward your chest to block an onslaught. The basics are simple. This isn’t a fighting game wherein there are a myriad of different combos to learn for each character — the only thing Arms has in common with Street Fighter or Tekken is that you must drain your rival’s health bar to pick up the w. Hammering multiple buttons during a bout isn’t advised at all, really; a tactical approach will prove more fruitful. If Spring Man tries to grab you for a throw, a punch will quickly put a stop to that; when Byte attempts to throw a jab in your direction, a block will ensure your safety; and while weird green blob Helix is in the guard position, it’s vulnerable to being caught and flung across the environment. It’s all about having patience and recognising tells, reacting to their action.

Because of its simplicity, it’s pretty easy to pick up and satisfying to master. However, this is a Nintendo Switch exclusive and there are two ways to control, of course: regular old buttons on any of the console’s more traditional controllers, or by using Joy-Con as imaginary boxing gloves. Neither are flawless.

In Arms, you can curl punches. So, when you’ve let one fly, you can bend it like the former Manchester United right-sided midfielder. When playing using a controller, curling punches and moving your character are both mapped to the left analog stick, meaning you annoyingly can’t do both at the one time. The Joy-Con are still far more clumsy, though. Stinging like a bee is easy enough, but floating like a butterfly is as awkward as anything. By tilting both Joy-Con either left or right at the same time, your long-limbed avatar will get stepping in the desired direction. Likewise, mimic Anthony Joshua by guarding or going on the attack, and your on-screen representation should do similar. If you’re not very precise, the character will plant their feet into the ground and refuse to go, like a stroppy teen who’s been told they have to go to their aunt’s house while The OC is on the telly. Blocking feels just as finicky. You have to be deliberate in your actions, because if you’re not, the opposition will strike. Non-responsive controls aren’t conducive to a successful Arms tenure, regardless of your loadout.

Each character has three Arms available to them that can be chopped and changed before you start a match. They do different levels of damage and have certain quirks over one another. They don’t necessarily come in pairs, either. If you fancy, you can can assign a heavy-hitting sphere to your left arm, and a missile-launcher to your right. There are some similarities across the 30 arms in-game, however, like Min Min’s Ramram which is a fiery boomerang that’s pretty close to Kid Cobra’s Baltic version: the Coolerang. Despite that, there’s fun to be had in fiddling with combinations, and trying out various characters and the abilities that are specific to them: Master Mummy can regenerate health while blocking; Ninjara goes invisible while dashing; and Ribbon Girl can jump a couple of times while airborne. If you take a liking to Mechanica’s hover ability, but want to use Kid Cobra’s Slamamander Arms, for instance, you can make that happen. You just have to be in possession of some serious coin.

Throughout the game, you earn coins which can be cashed-in for time with a mini-game where you shoot down stationary targets. The more coins you have, the longer you get — like the end of The Crystal Maze. You don’t get to pick what Arms you win at the end, however; the new weaponry you acquire is purely random, as is who it’s assigned to. So, if you do want your Mechanica to have access to the Slamamander, then you’ll be grinding for coins. To ensure every possible combination of Arms is available to all the characters, you’ll have to unlock each Arm 29 times. This mightn’t be such a laborious task if the single-player Grand Prix mode wasn’t the exact same thing over and over again, whomever you play with.

Grand Prix is like something seen in fighting games from the early 90s, minus a badass tournament name like King of the Iron Fist or Mortal Kombat. At the beginning, you pick one of the ten characters, then face off against the other nine in a combination of best of three matches and mini-games, and then you win. That is it. In this day and age, that’s just not good enough. Competitors in the market are putting together fully-fleshed out narratives that see you spread your time across a variety of different characters. This feels antiquated in comparison. And those aforementioned mini-games are barebone distractions.

V-Ball is, you guessed it, a mediocre volleyball mode that feels automated. There’s a bog standard wave-based affair in here too, as well as an awfully boring target practice game. Hoops is a basketball mode that’s a little bit better, because the strategy employed in the regular fights is still in play here as you try and grab your rival on the open court, and fire them through the hoop for points. The 2-vs-2 mode and four way dance options are the real duds, though, as it takes away the tactical battles from regular one-on-one matches, instead favouring chaos. You can’t punch one of your opponents without another coming in and grabbing you as your Arm is retracting. Arms normally asks you to react rather than act — but how do you react to two contrasting actions? You fucking don’t. You can’t avoid the shambolic parts of Arms in the game’s ironically named Party Mode, either.

Because you can’t access ranked mano a mano match-ups until you’ve completed Grand Prix on what is effectively normal mode, you have to get your online multiplayer kicks in Party Mode at first. The game takes those in the lobby and gives them a random match type to ‘enjoy’, often serving up some of the lesser multi-man options. It’s an absolute disaster. But one run-through of the single-player at the required level to unlock Ranked mode, and you should never have to worry about partying ever again.

Partying may be infuriating, but Arms definitely has the ability to make you smile, too. The goofy tone of the diverse line-up is really endearing, and arenas are just about distinctive enough to hold attention. Kid Cobra’s Snake Park is a large area that has spinning discs you can use to zip around quickly, while Twintelle’s Cinema Deux has some cars scattered around that can be used as cover. Ninjara’s Ninja College is narrow, long, and difficult to hide in; and the Ribbon Ring looks like your secondary school’s end of year disco with some elevating platforms that can provide good vantage points, or nice little hiding places.

Arms isn’t really a fighting game, but the aim is to pummel your adversary in a best-of-three match-up. It can serve up methodically paced clashes between two competitors, and absolute car crashes when you introduce a third person into the mix. Using the motion controls allows you to finesse your jab, yet swinging your Joy-Con around the front room is more trouble than it’s worth. Arms can dole out a battle of wits one minute, and a frustrating button masher the next. Yeah, Arms is a strange beast.

Stretching your limbs across the battlefield to stop an impending throw is good fun, but there's absolute anarchy when you throw in an extra body. The mediocre mini-games, and antiquated single-player further block the punch of Arms.
5 Fun, goofy tone Enjoyable tactical one-on-one battles Flaws in both methods of control Chaotic when there's more than two characters fighting 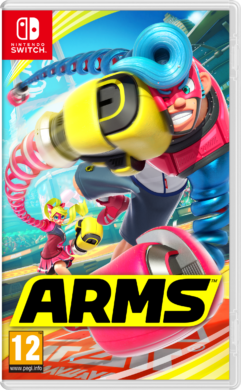