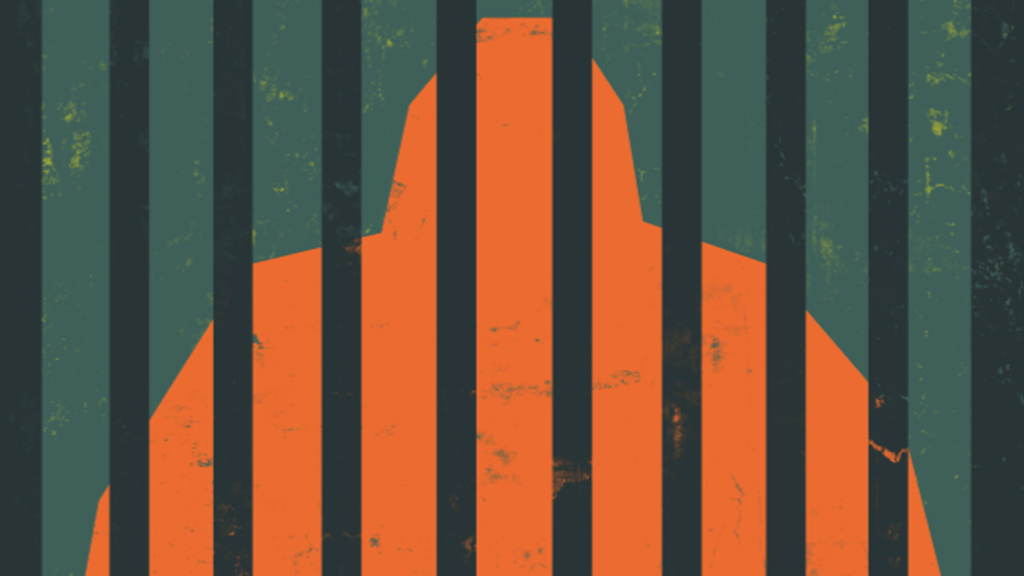 Don’t misunderstand this ape. There’s no desire to maim knocking about its furry little head, despite the fact it’s being held captive by some bad men in cream onesies, with an arsenal the kind Wenger could’ve only wished for while at the Emirates. It only wants freedom. Actually, it’s advisable to avoid any sort of confrontation with the gun-wielding horde; the carrot-coloured hoss doesn’t need that on their conscience, post-jailbreak, the poor thing. The guards are persistent, though, and not quite as peaceful as the orange unit, so there will be occasions where shoving an aggressor into an adjacent wall is recommended. It’s about survival. And jazz. Because as soon as their insides become their outsides, the cymbals crash, ushering in a frenetic beat that masterfully captures your state of mind during the mayhem of an Ape Out level. As well as the quieter moments.

Rarely does a piece of entertainment detail all pertinent information in a two-word title as beautifully as ‘Ape Out’. There are no skill trees or levelling up systems of any kind, no mid-campaign powers that effectively change the way you play, no effort to humanise the baddies in the third act with a dramatic scene involving one of them dropping their kids off for their first day at school. In line with that is the block, fuzzy art style that depicts all the essential detail in a gorgeously filthy way. Everything you need to know is communicated within the first couple of seconds of play.

You, as Ape, can do two things: grab enemies and hold them close, making them a meaty shield; or swat them away, as Bobby George would’ve done to a determined magpie in the late ‘70s. Ape don’t change. Ape stay same. And Ape is a beaut. They’re a marvel of the animal kingdom: the sky-high camera catches every shimmy, wiggle, and readjustment, so smooth is movement across these dangerous, ever-changing settings. 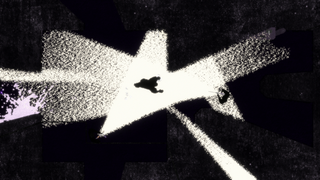 The variety comes in the form of some of that sweet, sweet procedural generation. *Yeah, I know.* A dirty term in some parts, but not where Ape Out is concerned. So, every stage can be simplified, quite easily: you start on the left and you must find your way to the exit on the right. But, when you die, the level resets; obstacles and attackers pop up in different places to where they were before. It works because the regeneration never betrays the rules. You’ll never see a flamethrowerer in disc 1, for example, or a pesky rocket launcher boy in disc 2. Each album has a certain band of performers and collection of instruments that it utilises, and all you have to worry about is where they’ll turn up every time you restart a track. It’s not about playing everything note-perfect; it’s about improvising.

Music is integral in Ape Out. Each world is presented as an album, and every stage a song. And you’re the composer. Once you give the nod, by forcing one of your pursuers to make contact with the concrete, the lone percussion races in, catching up to the havoc it anticipates you’re about to wreak. Every death interrupts the drummer’s admirable efforts to keep time, directing them towards the cymbals on the off-beat, creating an ever-evolving, harmonious ruckus of free-form jazz.

The meandering flow of toms and snares, reacting to your every move, is an absolute wonder. A moment of calm on your part is mirrored by the one with the sticks brushing the skins with the daintiest of touches, just as anarchy encourages them to unleash their inner animal (from The Muppets who also drums). Whilst the percussion mimics the drama, it also controls it. A moment of quiet generates fear, whilst the offensive begets more violence. In a sublime turn, it’s equal parts dominant and submissive. It’s glorious in its complexities. 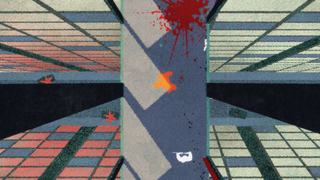 That’s what makes Ape Out so great: have a rummage around, and you *feel* much more. Sure, the destination is clear, but the journey there is soaked in spontaneous strategy. There’s an armoured bastard in range, shotgun in hand, and it’s up to you to decide whether they’re an immediate threat that needs to be offed, and if they are, whether they can be reached in time before they pull the trigger. Do that, and you have a selection of dismembered limbs you can use to stun the next sentry. If you’re clutching an enemy, you have to – again, very quickly – choose whether or not it’s worth foxtrotting along the bloodied floor in anticipation of another gung ho guard you could kill with your dance partner. Although, as I said, it’s about survival; you don’t kill for sport. At times, you’re better off as a beefy Steve Davis, playing safety shots by firing your fleshy cue ball away from the pack if it’ll set you up for a better break when you next step up to the table. The degree of variety in enemies presents a multitude of challenges, each an utter joy to parse.

Murder *is* the best course of action in the Arcade mode pressings of each album, though. Every stage becomes a score attack arena, with downed baddies, a quick time, and an unscathed primate accruing points. It offers longevity, in an otherwise succinct and already delightful package, but sadly not the ability to lord high scores over friends. It really is a shame there’s no leaderboards here, because Ape Out drives you to go again and again until you’re happy with your tally. Not being able to rub your pal’s nose in your mediocrity lessens the craving for bigger numbers.

Each LP is deserving of a Mercury Prize, and every song worthy of an Ivor Novello. Yes, the exclusion of online leaderboards lessens the arcade mode, but the fusion of play and AV across the board is just so exquisite; not a single element feels out of place or lacking in favour of something else. On-the-fly resolution sounds chaotic, but learning how to work with the pandemonium rather than against it is gratifying. It’s brilliant. Ape is Out. And that means You really should be In.

Available on: Switch [reviewed on], PC

Whilst the concept is there in the title, the intricacies of Ape Out’s are revealed the more you play. Every aspect creates a dazzling jazz mixtape that reverberates from eyes, to ears, to thumbs.  And you’re an ape. Which is great.
9 You’re an ape trying to get out Intricacies are delicately unveiled as the environments and adversaries change Mmmm, nice. BIG BASTARD MONKEY (not a monkey) 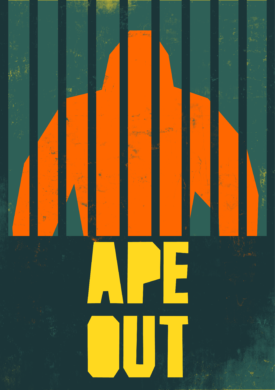