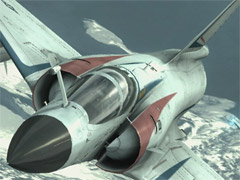 In the UK, the release of a new Ace Combat game barely raises an eyebrow, but in Japan things are very different when it comes to Namco’s legendary arcade flight sim. Furthermore, on the week of Ace Combat 6’s release in Japan, for the first time ever, the 360 did the unthinkable and outsold the PS3. Thankfully, Ace Combat 6 can absolutely carry the weight of the international hype on its winged shoulders, as it maintains and exceeds the standards set by previous editions.

Of course, like so many long running series, the vast chunk of the core of the game remains the same. Again there is an emphasis on simple arcade controls and Hollywood-style action that is the stuff of budding pilots’ dreams. Again the skies fill with a glorious array of intertwined ribbons and frenzied yells as glinting jet fighters leave a trail of vapour and radio chatter in their wake, and, as ever, Ace Combat takes war to a beautiful and serene place where conflict and carnage feel dreamy and enchanting.

This time the war takes place high over the pock marked ground of two new fictional enemies; the neighbouring nations of Emmeria and Estovakia. The underhand tactics and merciless campaigns of these two countries provides you with 15 substantial missions, most typically offering at least half an hour of aerial dancing each.

If anything there is slightly more emphasis on air-to-air combat this time around, perhaps as a result of Namco’s fine tuning of the near flawless control system. Ace Combat 6’s outstanding control scheme means that in no time at all you’ll be pulling off daring manoeuvres like the ‘high yo-yo’ and ‘split S’ without a thought, and shaving the tree tops or tailgating MiGs quickly becomes second nature. Where this excellent flying game succeeds is in making you feel like a top ranking dog fighter without any of the need for the intricacies of a typically complex flight sim.

Fires of Liberation is also a very intense experience. Rattling off your front gun as you secure locks on targets, release missiles into the distant blue, send commands to your wingmen and pirouette through the clouds is thrilling and overwhelming, and if you’re expecting a gentle slice of escapism look elsewhere. Ace Combat 6 is both accessible and strangely tranquil, but it will test your concentration as it bombards your senses with weaponry and updated objectives.

There are new elements too, such as the capacity to lurk in close proximity to allied ‘Electronic Support Planes’. These lumbering behemoths of the sky hover peacefully amidst the chaos, bolstering the abilities of any friendlies in reach. They offer a brilliant tactical double edged sword, as staying close restricts your range of movement, but greatly boosts the power and tracking abilities of your homing missiles.

A new ‘Allied Support’ system also gives you modest influence over air and ground units, allowing you to call in targeted help when you require it most. There is also a move to a more developed model for the escort missions, which are now particularly demanding, as they often require you to skip back and forth from one hapless ally to another, keeping them safe and en route to their destination. These missions though, remain particularly free and open to your interpretation. Never will you find yourself restarting as a result of a missed checkpoint or botched order of objectives, as you are encouraged to prioritise and tackle things in an order of your choosing.

Despite all the delicate adjustments under the fuselage of Ace Combat 6’s iron eagles, the biggest change in the series comes with the visuals. While Namco’s flying series, distributed in this airspace by Atari, has always been relatively impressive to look at, never has a flying game been anywhere near as graphically opulent. That the sleek steel and neat lines of the jet fighters is realised with gleaming realism is of no surprise, as they are fairly simple forms, but the ground far below your undercarriage is outstanding.

As you pass over mountaintops and forests, it is clear they are modelled on real photographs, and the cities and towns beneath you are realised with equal aplomb, while the relentless activity in the air is mesmerising. The extreme close up view of the terra firma that crashing provides does reveal some flaws in the details, but charging towards the sun, as its rays of light bounce off hillsides covered in crisp snow and strike your cockpit glass as delicate twinkles is one of the most impressive sights yet seen on the current generation of consoles. The cut scenes are also magnificent to behold, though they paint a far bleaker picture of war than the romanticised vision played out in the heavens, and are permeated by Ace Combat’s signature bad voice acting.

The game’s unconditional highlight, however, is not its ocular polish, but the epic battles with enormous and wonderfully absurd fictional flying super weapons. Every instalment in the series features such a scrap, but this time around the two included outshine any seen before. The combination of the severity of the combat and military fantasy makes the game feel a little like a modern, 3D realisation of the cultish Strikers 1945 series of games.

Multiplayer options are also plentiful, with aerial deathmatch and team deathmatch available for up to sixteen players. A number of co-op missions are also on offer for players who prefer to tackle single-player campaign-like objectives with friends, but the real star has the be Siege mode. Here two opposing teams take turns attacking and defending a set of targets, with the winning team being the one which scores the most points.

With a stunning single-player campaign, a wealth of capable online multiplayer facilities and the provisions of raw power the 360 offers, Ace Combat finally feels like it has become what it has always strived to be. It may well be more of the same, and it is certainly an acquired taste, but if dancing with angels and unleashing hell is to your liking, Ace Combat 6 might be the answer to your prayers.

With a stunning campaign, a wealth of capable multiplayer facilities and the provisions of raw power the 360 offers, Ace Combat finally feels like it has become what it has always strived to be.
8 Brilliant, intense gameplay Staggering visuals Plenty of atmosphere and excitement Fairly similar to previous versions